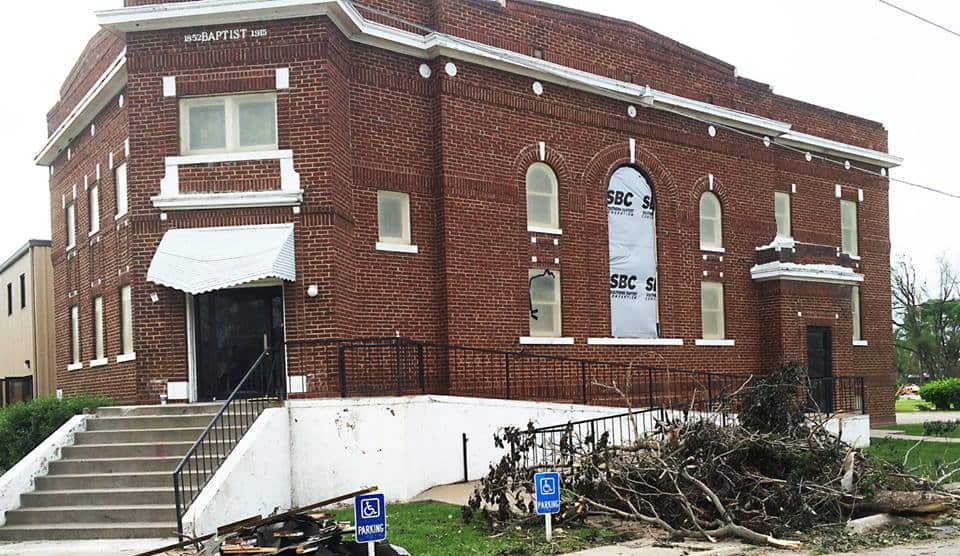 ORRICK – It was far from the largest storm, but an EF-2 tornado damaged nearly every structure in the small town of Orrick east of Kansas City, including tearing the roofs off First Baptist Church’s parsonage May 10. The city has asked Missouri Baptists’ Disaster Relief to coordinate the recovery effort of several agencies as the community moves forward.

First Baptist’s pastor, Matt Simpson, saw the tornado headed toward the community that afternoon and retreated to a basement closet with his wife, Tiffany, as the storm sirens began to sound.

“After about 10 minutes we heard it hit and could tell things were crashing and banging against the house, but our ears were popping and we didn’t’ really know what was going on above us,” he said. “I didn’t know how bad it was until I came out of the closet, looked up the stairwell and saw that the roof was gone. If we had realized what was going on, we would have been a lot more stressed out. We were praying for God to protect and He did.”

First Baptist’s church building, located a few blocks from the parsonage, suffered a few broken stained glass windows and possible structural damage to a wall. Simpson said the church is waiting for the insurance adjuster before deciding on a permanent solution. Until then, they are going to worship in the church’s fellowship hall.

“The miracle of it is that I don’t know of a single injury,” Simpson said. “Not even one. Every church member that I’ve talked to has had some sort of damage. It ranges from missing shingles, peeling off the roof and broken windows to people that lost both cars and ended up with trees in their house. Fortunately we had plenty of warning and took it seriously.”

Dwain Carter, director of Disaster Relief for the Missouri Baptist Convention, said that 80 percent of the town’s 259 homes have some sort of damage.

The Simpsons are living with Tiffany’s parents about 45 minutes north of Orrick in Cameron. The walls of the parsonage will remain, but the roof and interior of the house needs to be replaced.

Sixty-three Missouri Baptist Disaster Relief volunteers from Henrietta Baptist Church, Pleasant Valley in Liberty and First Baptist in Macon have completed approximately 60 jobs including debris removal and covering roofs with tarp. A shower unit is also there along with a communications unit and an Incident Management Team. That team’s experience and resources led to the city of Orrick tasking Disaster Relief with coordinating seven other groups working in town.