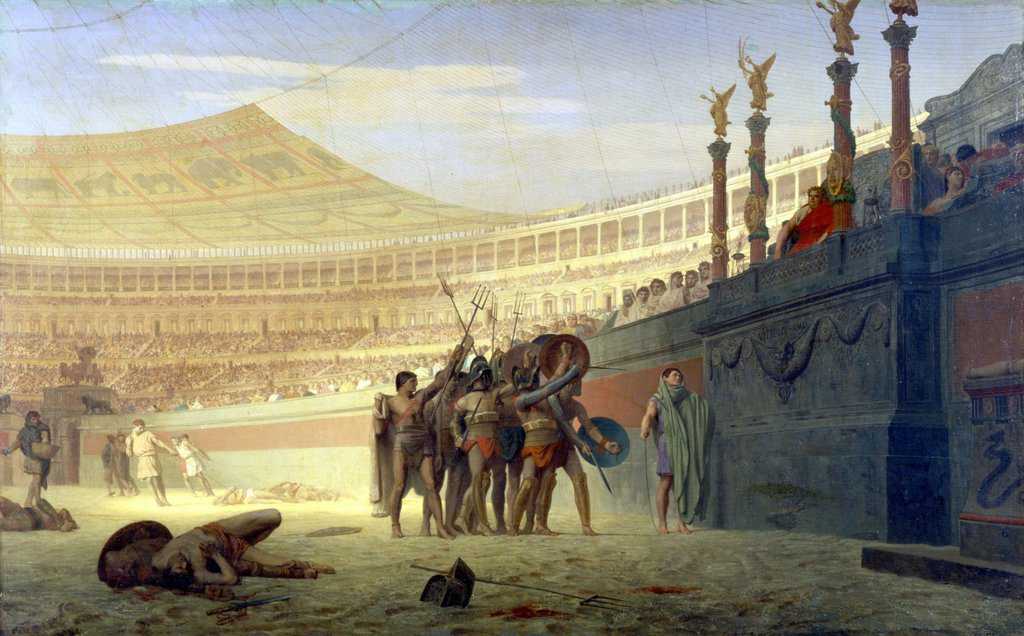 Brought to you by William J. Federer’s AmericanMinute.com

There were ten major persecutions of Christians in the first three centuries, and Diocletian’s was the worst.When Diocletian had lost battles in Persia, his generals told him it was because they had neglected the Roman gods.Diocletian ordered all military personnel to worship the Roman gods, thus forcing Christians either into the closet or out of the army.Within a few years, Diocletian had purged all Christians out of the military then surrounded himself with public opponents of Christianity.Once the Christian were out of the military, Diocletian used the military to force all of Rome to worship pagan gods.He revoked the tolerance issued by Emperor Gallienus in 260 AD.In 303 AD, Diocletian consulted the Oracle Temple of Apollo at Didyma, which told him to initiate a great empire-wide persecution of the Christian church.What followed was the most intolerant, hateful, and severe persecution of Christians.Diocletian had his military go systematically province by province arresting church leaders, burning scriptures, destroying churches, cutting out tongues, boiling Christians alive and decapitating them.From Europe to North Africa, thousands were martyred.The faithful cried out in fervent prayer.Then Diocletian was struck with a painful intestinal disease and resigned on MAY 1, 305 AD.Emperor Gelarius continued the persecution, but he too was struck with the intestinal disease and died.Commenting on Roman persecutions, Secretary of State William Jennings Bryan, the Democrat Party’s candidate for President in 1896, 1900, and 1908, stated in his speech, “The Prince of Peace,” (New York Times, September 7, 1913):“I can imagine that the early Christians who were carried into the Coliseum to make a spectacle for those more savage than the beasts, were entreated by their doubting companions not to endanger their lives.But, kneeling in the center of the arena, they prayed and sang until they were devoured.How helpless they seemed, and, measured by every human rule, how hopeless was their cause!And yet within a few decades the power which they invoked proved mightier than the legions of the Emperor, and the faith in which they died was triumphant o’er all the land….They were greater conquerors in their death than they could have been had they purchased life.”Of the Roman Coliseum, President Ronald Reagan stated at the National Prayer Breakfast, February 2, 1984:“This power of prayer can be illustrated by the story that goes back to the fourth century – the monk [Telemachus] living in a little remote village, spending most of his time in prayer…One day he thought he heard the voice of God telling him to go to Rome…Weeks and weeks later, he arrived…at a time of a festival in Rome…He followed a crowd into the Coliseum, and then, there in the midst of this great crowd, he saw the gladiators come forth, stand before the Emperor, and say, ‘We who are about to die salute you.’And he realized they were going to fight to the death for the entertainment of the crowds.He cried out, ‘In the Name of Christ, stop!’And his voice was lost in the tumult there in the great Colosseum.And as the games began, he made his way down through the crowd and climbed over the wall and dropped to the floor of the arena.Suddenly the crowds saw this scrawny little figure making his way out to the gladiators and saying, over and over again, ‘In the Name of Christ, stop!’And they thought it was part of the entertainment, and at first they were amused.But then, when they realized it wasn’t, they grew belligerent and angry.And as he was pleading with the gladiators, ‘In the Name of Christ, stop!’ one of them plunged his sword into his body.And as he fell to the sand of the arena in death, his last words were, ‘In the Name of Christ, stop!’And suddenly, a strange thing happened.The gladiators stood looking at this tiny form lying in the sand. A silence fell over the Colosseum. And then, someplace up in the upper tiers, an individual made his way to an exit and left, and the others began to follow.And in the dead silence, everyone left the Colosseum. That was the last battle to the death between gladiators in the Roman Colosseum.Never again did anyone kill or did men kill each other for the entertainment of the crowd.One tiny voice that could hardly be heard above the tumult. ‘In the Name of Christ, stop!’It is something we could be saying to each other throughout the world today.”