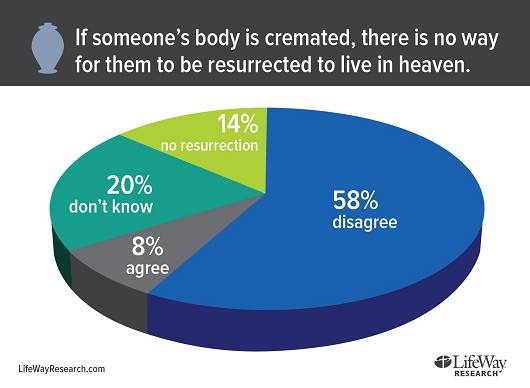 NASHVILLE, Tenn. (BP) – Cremation may be the new American response to death, according to a survey by LifeWay Research.

Six in ten (58 percent) say being cremated won’t keep you from being resurrected to live in heaven. And few (14 percent) say cremation is wrong. 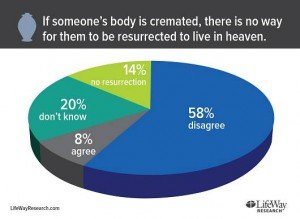 The LifeWay online survey reflects the growing acceptance of cremation, which has become common in the United States.

LifeWay researchers found that few Americans have qualms about the practice.

More than 7 in 10 (71 percent) disagree with the statement, “I believe it is wrong to cremate a body after someone dies.”

Only 3 in 10 (30 percent) disagree with the statement, “I plan to have my body cremated when I die.” Forty-one percent agree, while 29 percent do not know.

“Few people stay in the same place all their lives, so they don’t have strong connection to a place they want to be buried,” he said. “Cremation is also often less expensive than burial. And many of the social taboos about cremation are fading.”

The survey found that few Americans think cremation has any consequences for the afterlife. Fifty-eight percent disagree with the statement, “If someone’s body is cremated, there is no way for them to be resurrected to live in heaven.” Only 8 percent agree. One in 5 (20 percent) don’t know. Fourteen percent say there is no resurrection to live in heaven.

Evangelical Christians have been wary of cremation in the past. And the practice does remain less common in the Bible belt. In Alabama, Kentucky, Mississippi and Tennessee, the cremation rate is among the lowest in the country, at 23.9 percent, according to CANA. By contrast, in Alaska, California, Hawaii, Oregon and Washington, the cremation rate is 60.3 percent. ν