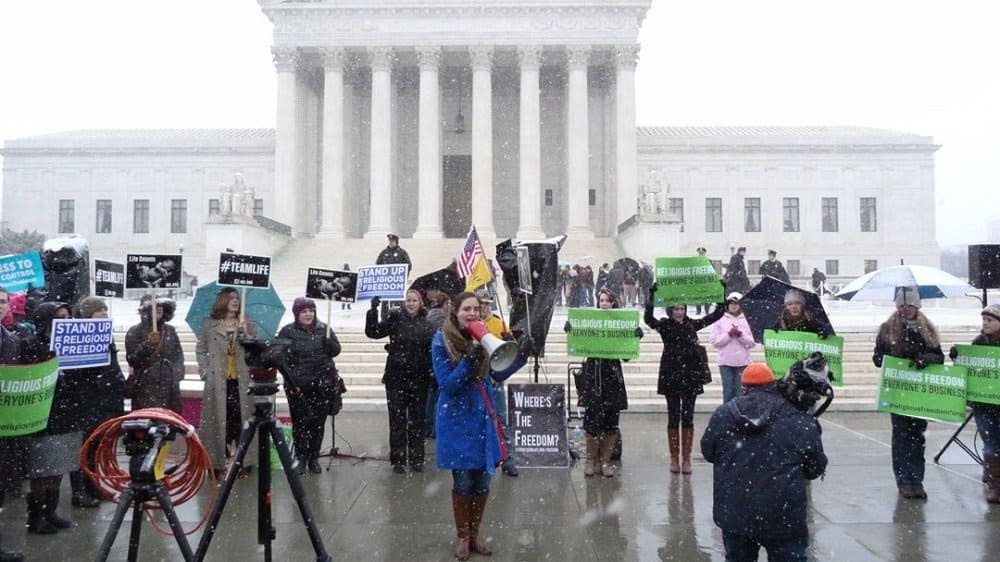 WASHINGTON (BP) — The U.S. Supreme Court contemplated the right of business owners to exercise their religious beliefs in the face of a government decree upon their companies during oral arguments in a case that is expected to have a long-lasting impact.

On Tuesday (March 25), the justices heard lawyers for the Obama administration and two corporations debate the constitutionality of the federal government’s abortion/contraception mandate, which requires employers to provide abortion-causing drugs and devices for their workers. Hobby Lobby, the nationwide retail chain, and Conestoga Wood Specialties, a Pennsylvania business, contend the federal regulation violates their owners’ consciences and the Religious Freedom Restoration Act (RFRA), a 1993 law protecting religious liberty.

Advocates for the corporations said some of the justices seemed particularly concerned the government position would support an abortion requirement for families and businesses. They expressed optimism after the arguments.

“We’re hopeful that the court will end up in the right place and protect religious liberty here, and they had an awful lot of difficult questions for the government,” said Mark Rienzi, senior counsel for the Becket Fund for Religious Liberty, which has represented Hobby Lobby.

“I won’t make guesses, but it felt like a good day,” Rienzi told Baptist Press outside the court building. “It felt like they asked really good questions, and we’re happy with it.”

Matt Bowman, senior legal counsel for the Alliance Defending Freedom, told BP his organization is hopeful the high court will continue to give religious liberty the “high level of deference” it has had in the past.

Meanwhile, Planned Parenthood Federation of America’s president expressed optimism for the supporters of the abortion/contraception mandate.

“It was a wonderful day I think for women, and I really believe that this court understood that women have the right to make their own decisions about their health care and their birth control, and it’s not their bosses’ decision,” Cecile Richards told reporters afterward.

Supporters of Hobby Lobby and Conestoga Wood have said religious free exercise for Americans is in the balance as the Supreme Court ponders its decision, which is expected to be issued before its term ends in late June or early July.

Russell D. Moore, president of the Southern Baptist Ethics & Religious Liberty Commission (ERLC), has described it as “the most important religious liberty case in a generation. The decision “will set the tone for the next hundred years of church/state jurisprudence in this country,” he said.

“If the federal government can force organizations and businesses to pave over their own consciences, to choose between being believers and being citizens, what will stop the government from imposing its will on anyone’s conscience next?

“As Christians, soul liberty is about more than political principle for us,” Moore said. “We believe, as our Lord commands, that we should render unto Caesar that which belongs to Caesar. The conscience does not bear the image of Caesar, and cannot be swept into the federal treasury by government fiat.”

The justices heard arguments about the mandate after more than 2 1/2 years of protests by pro-life and religious freedom advocates. In implementing the 2010 health-care reform law, the Department of Health and Human Services (HHS) announced in August 2011 a proposed rule requiring employers to pay for coverage of contraceptives, including ones that can induce abortions. Objections to the regulation failed to produce either a withdrawal from HHS or adequate conscience protections requested by religious liberty proponents.

HHS provided an exemption to the rule for churches and their auxiliaries but did not extend it to non-church-related, non-profit organizations and for-profit companies that object. The administration also offered an accommodation for non-church-related religious organizations, but critics said it was inadequate because it still forces such groups to provide access to the drugs through third parties.

More than 300 parties –- some non-profit organizations and some for-profit corporations — have combined to file 94 lawsuits against HHS, according to the Becket Fund. The consolidated case the justices heard March 25 involves for-profit businesses. The non-profit cases have yet to work their way up to the high court.

A divided three-judge panel of the Third Circuit Court of Appeals in Philadelphia ruled against Conestoga Wood, saying for-profit, secular organizations “cannot engage in religious exercise.” In ruling for Hobby Lobby, however, the 10th Circuit Court in Denver rejected the Obama administration’s argument that protections under RFRA do not extend to for-profit companies. It ruled corporations “can be ‘persons’ exercising religion for purposes” of RFRA, which requires the government to have a compelling interest and to use narrow means to burden a person’s religious exercise.

The ERLC signed onto a friend-of-the-court brief filed by the Christian Legal Society in support of Hobby Lobby and Conestoga Wood. Also among the 5