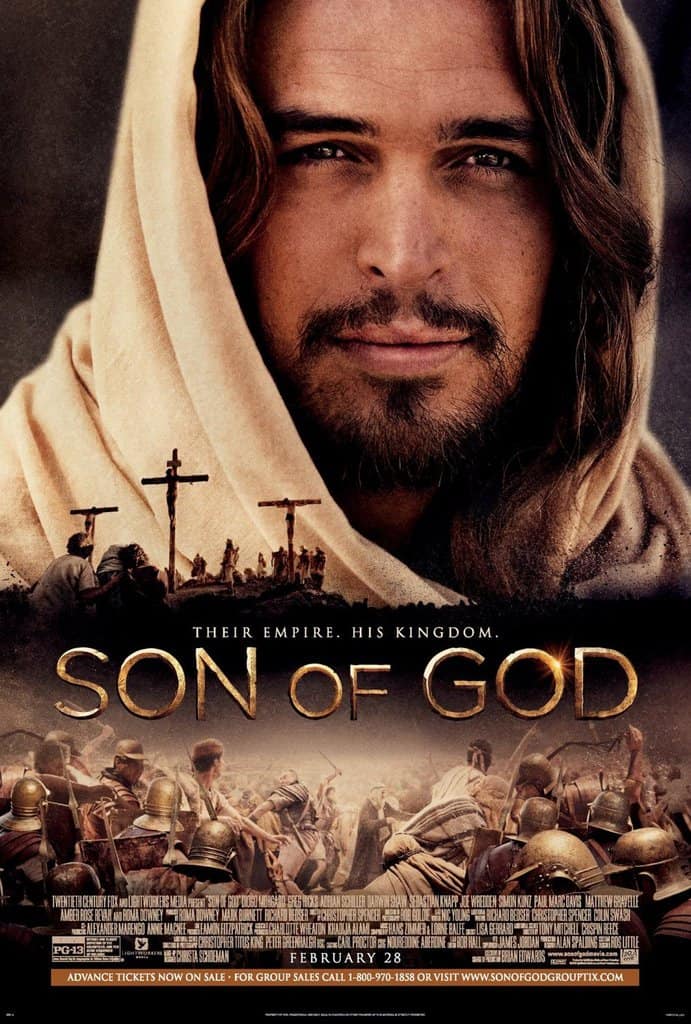 The Bible has inspired some truly masterful works of art: Michelangelo’s “Pieta,” Handel’s “Messiah” and DaVinci’s “Last Supper” are but three masterpieces that show man at his cultural pinnacle with a biblical underpinning. Sadly, biblical art has slipped a little.

“Son of God,” a new theatrical release edited together from snippets of “The Bible” miniseries that aired on the History Channel last spring, doesn’t rise to Da Vinci’s standards. To be honest, it doesn’t rise to Thomas Kincade’s standards. But despite what you’re about to read, I actually kind of liked it.

The re-edited footage follows Jesus through the four Gospels and while many things must obviously be cut and edited down, it presents a decent episodic summary of Jesus’s ministry, death and resurrection. Some have criticized the editors for removing the role of Satan that appeared in the miniseries, but I didn’t think the absence hurt the biblical truth of the movie in the slightest. Sin is still present as mankind’s chief problem, and for a short summary that’s enough for me.

I missed the miniseries when it was televised, so I can’t comment as to whether it may play better on the small screen. That the footage was originally intended for television, however, is quite obvious. The director(s) rely heavily on close-ups of the actors, perhaps to hide the very shabby sets and scale models of Jerusalem and the Temple that are fake to the point of distraction in wide shots. We get several flashbacks to scenes that were most likely in the miniseries but are not in the movie. It’s odd and confusing to anyone who isn’t already very familiar with the Gospel narrative.

Diogo Morgadoa, a Portuguese actor playing the lead is the cast’s weakest link. His Jesus is not quite a lily-white, blond-haired, blue-eyed caricature, but he does have long, flowing, very clean locks and a silly smirk on his face for most of the performance. I have zero doubts that Jesus smiled – a lot – but there just was something off here. It bugged me that His teeth belonged in toothpaste commercial and the bottoms of His sandals were a bright white. Is it heresy to suggest that the only Man to ever live a sinless life occasionally got His feet muddy?

It will no doubt be compared to “The Passion of the Christ.” I am seemingly the only believer in the country who has never seen that film, so I can’t say which is more biblical. I can, however, say that the new movie’s portrayal of Jesus’ flogging and crucifixion is less graphic; “Son of God’’ carries a PG-13 rating, versus “Passion’s” R. It’s still not a pleasant scene to sit through. In real life it truly was a brutal event, so maybe the more restrained approach is incorrect. That’s for you to decide.

One scene shows three prayers in quick succession: Jesus in the Garden of Gethsemane, the high priest in the temple preparing for Passover and Pilate invoking his ancestors. The contrast of a relationship with the Father, rote religiosity and paganism is stark and tragic. Knowledge of which prayer is pleasing to the Lord makes this moment a dramatic highpoint.

A second bit of cinematic success shines through as Peter runs to the disciples after the Resurrection. Instead of explaining what he saw at the empty tomb, he shows that it’s finally dawned on him what Jesus meant at the Last Supper as He broke the bread and poured the wine. It’s not necessarily biblical, but it communicates the idea well enough in a way I wasn’t expecting. Peter, it should be noted, gets a lot of screen time and Sebastian Knapp, the actor portraying him, turned in the best performance of the cast by a long shot.

So “Son of God” suffers from major artistic problems, and the only two scenes that stood out to me were toward the end. The ultimate redeeming quality here is that despite its myriad of faults, “Son of God” reminded me of the incredible true story the Author and Creator of the universe has given us. It conveys the gospel of Jesus: that He alone is the way, the truth and the life (though the last part of that phrase,“no one comes to the Father except through Him,” doesn’t make the cut).

I realize I should probably just be happy that Jesus’s name is in the theaters and for once is not being used in vain. I just wish we had a little more talent behind and in front of the camera; Sherwood Baptist church and the Kendrick brothers (“Fireproof,” “Courageous”) have shown Christians are capable of producing decent films.

If you want a reason to eat popcorn and a way to spark conversation, it’s worth a matinee ticket. It’s just that like countless movie adaptations, I’d simply prefer to read The Book.