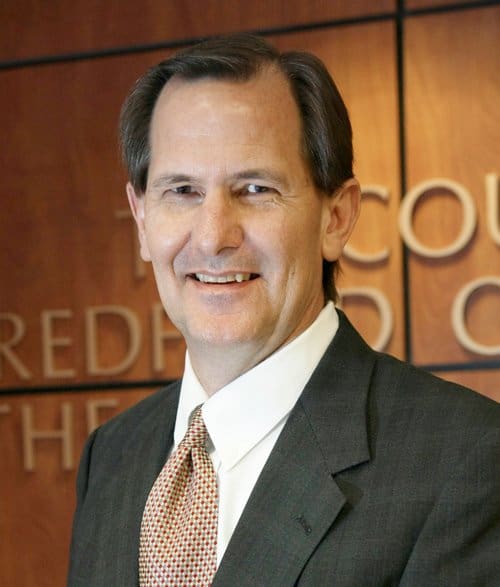 “We sincerely appreciate Al and Rosemary McCord for their generous donation to establish the Courts Redford Chair of Biblical Studies,” said SBU President C. Pat Taylor. “We also are pleased to be able to honor two of our alumni who have made significant contributions in business and military service. Please join us for Founders’ Day as we recognize these individuals who truly are servant leaders in a global society.”

An endowed chair honors and recognizes distinguished faculty members while providing invaluable financial resources to support salary, research, and teaching or service activities. To date, SBU has five endowed chairs. The minimum threshold to establish an endowed chair is $250,000, but the corpus must reach $500,000 before the chair is fully funded.

A donation from Al and Rosemary (Redford) McCord has established the Courts Redford Chair of Biblical Studies. Rosemary is the daughter of Courts and Ruth Redford. Redford served as the 15th president of Southwest Baptist College from 1930-43.

Rodney Reeves, Ph.D., professor of biblical studies and dean of The Courts Redford College of Theology and Ministry, was honored by being named to the new academic chair position.

Chaplain (Col.) Gary D. Gilmore of Mt. Vernon is senior chaplain in the Missouri National Guard, supervising all Army and Air National Guard Chaplains and eight seminarian chaplain candidates. Gilmore was the recipient of the Bronze Star and other numerous awards. His wife, Susan, and their three children are also SBU graduates. He received an Honorary Doctor of Theology.

Alvin Rohrs of Dunnegan is president and chief executive officer of Enactus (formerly known as SIFE), with world headquarters in Springfield. Enactus is an international non-profit organization that brings together student, academic and business leaders who are committed to using the power of entrepreneurial action to transform lives and shape a better, more sustainable world. Prior to his work with Enactus, Rohrs served SBU as director of the Gene Taylor National Free Enterprise Center. He received an Honorary Doctor of Business.