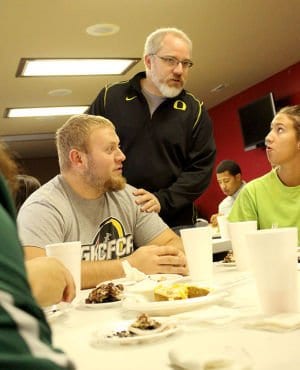 “Today’s college students are very-near-future leaders. It’s important to be able to help guide and be a part of that,” he said.

Born and raised in Eugene, Ore., Smith was always the guinea pig when it came to new and evolving ways of being educated. He was in the ﬁrst class to take the PACE test in elementary school and was part of the ﬁrst four-year international high school.

Due to the fact that he didn’t connect well with his parents early, he was always in his room reading.

This practice taught him to sort information to ﬁnd the truth at a young age. When it came to faith though, early on, Smith was not as much interested.

“My wife says that I grew up with a drug problem … I was drug to church every Sunday,” he said.

By his sophomore year of high school, though, his objective, driven mind led him to the conclusion that, surely, if there is creation, there has to be a creator. However, still keeping that on the back burner, Smith then went to Oregon University with a mind for business.

He majored in Spanish, and he was instantly smitten with the diversity and environment college has to offer. Once Smith joined the Baptist Student Union at Oregon, he was really able to feel an impact.

“I knew God wanted me to work speciﬁcally with college students,” he said.

After getting his bachelor’s degree at Oregon, Smith became part of the Army Reserve in psychological operations. With a group of college-aged peers, he led a mission to Romania.

That’s where he met his wife, Mandi, who now helps with studies at the Missouri Southern State University (MSSU) Baptist Student Union (BSU). Smith soon went to Midwestern Baptist Theological Seminary in Kansas City, where he completed a degree in college ministry in 2001.

He said, “If God has given you something to do, you must prepare yourself to do it right.”

Smith spent three years as director of the BSU at Indiana University where he was ﬁrst able to start his dream of working with college students through studies, games, charity events and other activities. Now Smith directs Southern’s BSU. Through the Spring River Baptist Association, Smith has been working with students of Southern since 2005, and engaging in the community.

The Baptist Student Union building is right behind the dorms on Duquesne. The group meets for Common Ground worship on Tuesdays at 7 p.m. and even offers Noon Day #MOSOBSU, a free lunch provided for students and faculty on Wednesdays from 11:30 a.m.-1 p.m. The group also hosts a Facebook page, and can be found on Twitter, Instagram and Tumblr.