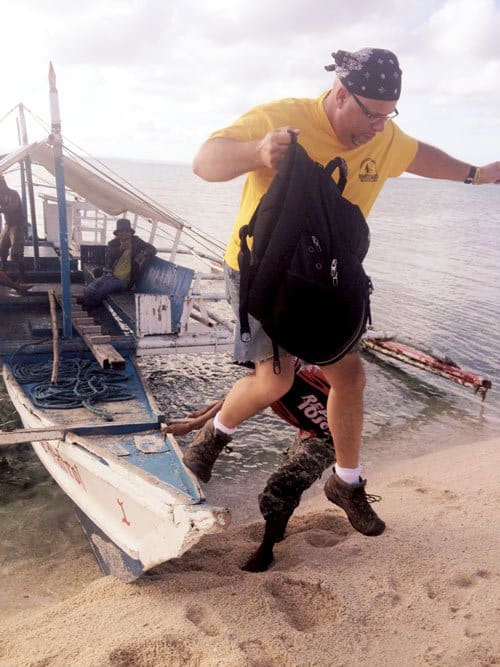 Pathway photo by Brian Koonce GIBITNGIL, the Philippines – Dwain Carter, director of disaster relief for Missouri Baptist Convention, jumps off a canoe to begin recovery work on a school here. Teams from Missouri will be returning to the Philippines through February. See related stories and pictures on pages 12-13.

GIBITNGIL, the Philippines – While most of Missouri was wading through snow drifts and scraping ice off windshields, six Disaster Relief (DR) volunteers were wading out to an ocean-going canoe and reusing bent, rusty nails in an ongoing effort to rebuild a Filipino school damaged by November’s typhoon.

Teams from Baptist churches across Missouri will be going to the tiny island through the middle of February – the first team returned just before Christmas – helping to rebuild a school that is the center of life on the one-square-mile island. Specifically, the teams aim to replace roofs that funnel rain into cisterns and provide the only freshwater source for the volcanic island’s 450 families.

Typhoon Haiyan (or, as it’s referred to in The Philippines, Typhoon Yolanda) passed directly over Gibitngil Nov. 8, as families crammed into the school buildings seeking shelter. They were considered to be the strongest and safest buildings on the island as the winds topped 200 mph and sea swells reached 50 feet. One building’s walls collapsed and the roof or parts of the roofs of three buildings were blown into the Visayan Sea while they huddled inside. Miraculously no one on the island was killed, and there was only one serious injury. Nationwide, more than 5,900 people lost their lives, and thousands more were injured. Missouri Baptists were asked by Baptist Global Response (BGR) – the disaster relief arm of IMB) – to adopt the island as BGR continues to coordinate Baptist recovery and food distribution across the country.

“Missouri has been great from the very first days after the storm,” said BGR president and former missionary to the Philippines, Jeff Palmer. Two Missouri Baptist volunteers were on the initial assessment teams in immediate days after the typhoon. “This kind of sustained, multi-team response is going to be huge for this community. It’s not just the school. It’s a tremendous witness to each person that sees you working here.”

The first team from First Baptist Churches, Desloge and Salisbury, Freshwater and Concord Baptist, Jefferson City, faced challenges and delays, but the trip still yielded Kingdom results. They brought their own food from the U.S. and waded out to a large canoe each morning to make the 30-minute ride to Gibitngil. Though it is technically winter in the Philippines, the temperatures regularly climbed above 100 degrees with humidity hovering around 80 percent. The team brought as many tools as they could carry, but materials and things normally taken for granted, such as ladders, were either slow to arrive, too expensive or simply unavailable. Initially, the Missourians were forced to pull lumber from debris piles, straighten used and bent nails by hand and make their own ladders to begin tearing off the damaged roofs and begin the reconstruction. Local believers and the International Mission Board have begun a house church on the island and the principal – who is a believer – allowed the team to share Jesus with the older students.

“This trip was very successful in multiple ways,” said Dwain Carter, director of disaster relief for the Missouri Baptist Convention. “We got to do the work we came to do, but we also built some great relationships with the students and encourage parents and teachers. We told them they, their school and their students mattered to us and to God. He was glorified in absolutely everything that happened. It was mind blowing that I and Randy Asbury (of First Baptist, Salisbury) got to stand up there and share from the bottom of our hearts and God’s Word to the students with no fear. In fact, the principal told us she was praying we could come and ask her if we could talk about the Lord.”

The volunteers were introduced to the school as “Yellow Men from Missouri” (a reference to their yellow Disaster Relief shirts and hats), and took time to interact, joke, or play basketball with the students. As the volunteers hammered nails straight to build the ladder, groups of kids gathered off to the side and imitated them, using rocks to hammer sticks. By the end of the week on the island, the students had made Christmas cards thanking the team “for sharing God’s love,” and the teachers had written and performed a song saying thank you.

Parents of the school’s students joined the Missourians climbing on the hot tin roof, and carried the lumber, metal, two generators and a welder up the rocky, winding half-mile path to the school at the top of island. Carter built a relationship with the mayor of the larger city on the mainland, who embraced the mission and provided the team with boats, scaffolding, equipment and more