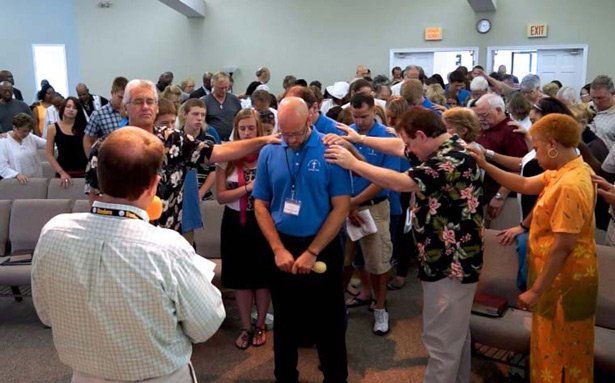 They minister at a halfway house, truck stop, school and race track.

They’re also involved in biblical counseling, community outreach and planting churches locally – in the Harrisburg, Pa., area – and globally – in the Caribbean and Africa.

“Our call is to do what God desires,” said Brian Harrison, pastor for the past 11 years. “We want to do more than simply do church. We’re getting to the heart of what God has truly called East Shore to do and to be in the context of our community and our world.”

East Shore gives 13.5 percent of its undesignated receipts to missions through the Cooperative Program, the way Southern Baptist churches work together to minister through their state conventions and around the world.

“Our giving to missions through the Cooperative Program is what we give to God and His Kingdom as a church body,” Harrison said. “We are investing in God’s Kingdom.”

While East Shore has received CP support for some of its ministries, such as for a sound system for a church plant, the benefit of Cooperative Program giving is more intangible, Harrison said.

“The biggest benefit, for me, is what we see God doing through the Cooperative Program in Pennsylvania, South New Jersey and throughout the world,” the pastor said. “To be a part of that is awesome and a blessing.”

East Shore used the Transformational Church assessment tool from LifeWay Christian Resources to learn how God can most effectively use the church in the expansion of His Kingdom. At a retreat in November, members got a better handle on what God’s desire is for East Shore, the pastor said. Church planting will continue to be a major thrust.

“I am so passionate about helping plant churches in our area,” Harrison said. “We grow, and we give families away to church plants.

“A church needs to give itself away,” he said. “There are not very many biblical churches or evangelical churches in our area, and there are a lot of people who don’t go to any church on Sunday.”

East Shore helped plant Living Legacy Church in Hershey, Pa. Now the two churches are partnering to plant churches in the Capital Region of Pennsylvania and are working with Transcend Church and Redeeming Grace Church, both new launches in Harrisburg.

Partnerships – such as the one between East Shore and Living Legacy – multiply effectiveness, said Harrison, president of the state convention’s executive board for the past four years.

“It’s a blessing to both churches when together they can do something neither one could do alone,” the East Shore pastor said. “That same principle is what makes the Cooperative Program work so well. Together we can do so much more than any of us could do on our own.”

Pennsylvania, an ethnically diverse state and state Baptist convention, has more than 12 million unreached people, Harrison said. This includes a fairly large refugee community of Bhutanese who were settled in the central part of the state by the United Nations.

East Shore, outside the beltway and northeast of downtown Harrisburg, is in the planning stages of a partnership with an inner-city African-American church. In addition, a church planter from the Congo is in Harrison’s Leadership Training Program. He is training to reach people from Africa who live in Pennsylvania.

“Some years ago our church hosted and helped plant a Ukrainian church,” Harrison said. “While that church has since flourished and gotten out on its own, it wasn’t always easy. There were a lot of lessons learned. …

About half a dozen East Shore members lead a Bible study each Wednesday at the Keystone halfway house for soon-to-be-released prison inmates; and on Sunday, the church van brings those who want to attend Sunday morning worship.

Another group of East Shore members ministers through KidsHopeUSA at an elementary school near the church. Still other members provide meals several times a year at the back side of the Penn National Racetrack, which is near the church, to support and encourage the ministry of Chaplain David Dow, who links with the Baptist Resource Network. Another couple have faithfully ministered for more than 11 years to truckers passing through on Interstate 81.

Co-pastor Bryan Lingle leads the East Shore Biblical Counseling Center, where several members have been trained to share Scripture as a way of helping people address issues in their lives. The church also helps with the local recreation center and many other community projects.

“We are a very busy church,” Harrison said. “We cannot do all the good things that come along …, and sharing Christ in our region can be a real challenge. We just desire to do what God has called us to do, and do it very well. Another [challenge] is that we are failing to properly disciple our people, and we are working hard to correct that.

“But we are already seeing God at work,” the pastor said. “I think God has given us a unique calling because of the number of people with unique skills He has brought here.”