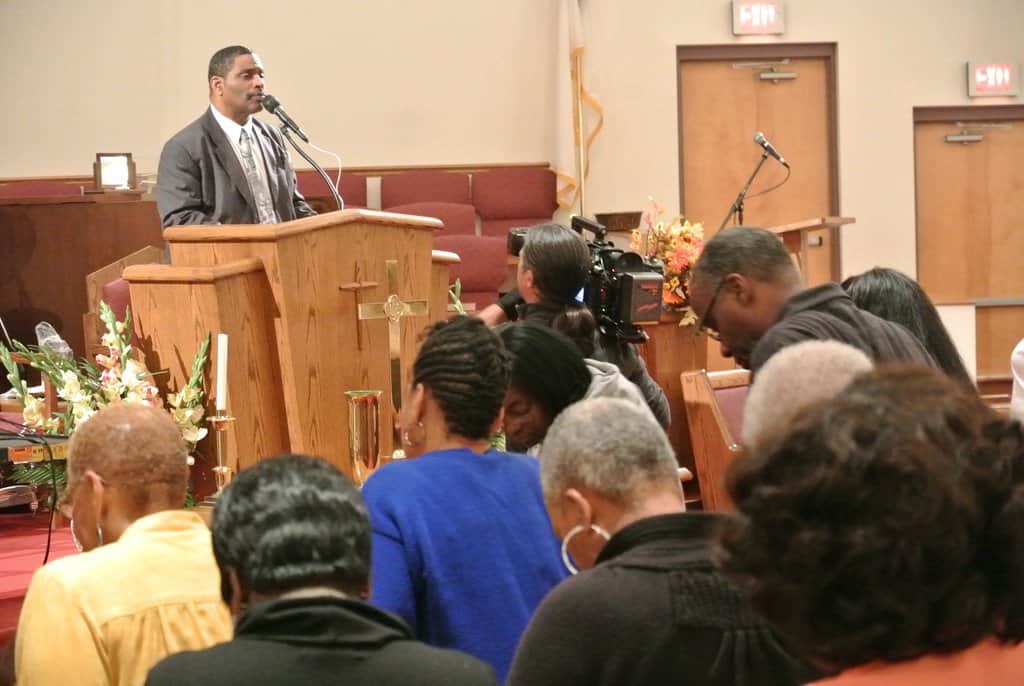 PHILADELPHIA (BP) – My Hope America with Billy Graham has provided a catalyst for Christians to live evangelistic lives extending outside church walls and into all walks of life, said K. Marshall Williams, an inner-city Southern Baptist pastor in Philadelphia. Williams will be one of the featured speakers at the Sowing in Tears conference Jan. 27-28 at Crossway Baptist Church in Springfield.

“I think the problem today is not the increase of darkness,” Williams said. “It’s the absence of light. And it’s time to get the saints up off the pews and out into the marketplace, sharing the gospel first by allowing people to see the gospel.

“People have heard a lot of sermons. They want to see your sermon,” the pastor said. “Once they see your sermon, now you have maximum capacity to allow them to hear it.”

A viewing of “The Cross,” a My Hope film featuring Graham, drew 300 members and nearby residents to Nazarene Baptist Church, a congregation of 600 in a neighborhood wrought with classic inner-city problems, including a poor education system, high crime, drug and alcohol addiction, unwed mothers and child abuse.

Of the 50 or so who walked to the altar after the film, 15 made professions of faith in Christ. Others rededicated their lives and accepted prayer.

“If you’re here today and you want to receive Jesus Christ as your personal Savior and Lord,” Williams had said in extending an invitation to the audience, “I want you to just step out from wherever you are and come down.”

“When everybody starting coming forward, I said thank You, Lord; You answered prayer, that our labor was not in vain,” Williams recounted. “So many times you plant and water, but don’t see the increase. But God did it.”

Among those saved was 11-year-old Aaliyah Allen.

“I was watching the film, and [Billy Graham] said that God loves us all,” Allen said on a video the church recorded and placed on YouTube. “And I was getting into a lot of trouble when I felt really guilty about it. And when I got saved, I felt like everything was just like I started from a new slate.”

Rhonda Oliver, an adult who had visited Nazarene at times with her family, also turned to Jesus.

“Billy Graham … when he was talking about Jesus and how when He died on His cross – some parts [Graham] was saying in the Bible kind of touched me,” Oliver said. She could picture “in my mind of what He really went through. And I just felt how He died on the cross for us, it kind of hurt my heart.”

Williams plans to follow the program with several initiatives aimed at encouraging church members to engage in daily evangelism. The church will hold another evangelistic outreach preceding Thanksgiving, including a dinner and service; participate in the Angel Tree Christmas program for children whose parents are incarcerated; and continue to offer training in new member and discipleship classes.

“The greatest way to share [the gospel] is as a way of life with people that you meet every day that you have natural relationships with,” Williams said. “And how many people do we know [whom] we’ve never shared the love of Jesus with?

“It’s time for the body of Christ to get serious about sharing the gospel of Jesus Christ because men, women, boys and girls are dying every day without Jesus.”

The tri-state area of Philadelphia, Camden, N.J., and Wilmington, Del., has more than 1.3 million people who have not accepted Jesus, Williams said.

“Lostness is rampant,” he said. “There’s a sense of hopelessness.”

In addition to the Nov. 6 My Hope outreach at the church, about a dozen Nazarene Baptist members hosted events in their homes.

In slating an outreach also at the church, Williams noted “there are challenges in the urban environment with inviting people, especially strangers, into your home. That was something that was unique, and I guess it’s not only in the city, but anywhere today. Door-to-door evangelism is not as effective anymore because of that. People won’t open their doors.

“So I’ve been promoting evangelism as a way of life,” Williams said. “All of us have friends, relatives, acquaintances, neighbors who don’t know Jesus. And I used this My Hope training as an effective way of giving them another tool to reach anybody in their concentric circle of contact with the gospel.”

Individuals, churches and community groups across the nation participated in the grassroots My Hope campaign, which encouraged Americans to invite neighbors and others into their homes to view a gospel message from Billy Graham and give them an opportunity to accept Jesus. The Billy Graham Evangelistic Association provided discipleship and evangelism training in person and online to participants.

The Cross, the culminating message of the My Hope initiative that spanned several days in November, is available via Internet downloading and DVD and was billed as perhaps the last message of the 95-year-old iconic evangelist. Reports of salvation decisions were relayed from across the nation, according to the My Hope website. Individuals in at least 28,000 churches in the U.S. and Canada participated, according to the website.

Since its birth in 2002, My Hope with Billy Graham has been held in 57 countries.