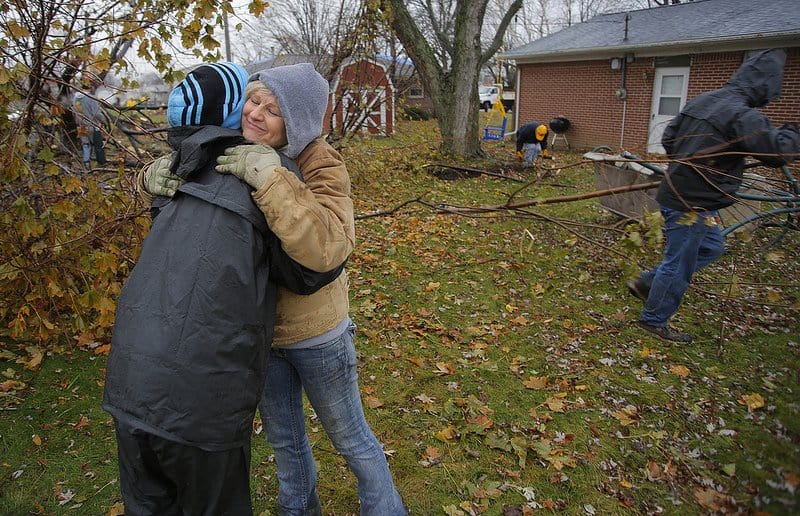 KOKOMO, Ind. – For many exhausted homeowners in Kokomo, Ind., working around the clock to clean up their homes, Southern Baptist Disaster Relief (SBDR) has been a welcome reprieve.

SBDR volunteer Karol Jones, a member of Ladoga Baptist Church in Jamestown, Ind., says over and over this week she has talked to worn-out homeowners who can’t believe Southern Baptists would help them—even in the midst of freezing rain—with cleanup, yet not ask anything in return. One homeowner on Thursday, Jones adds, was so grateful she volunteered to serve others.

“It’s the same response we’ve heard everywhere,” Jones said. “They just feel so blessed that God has sent hands to help them.”

Jones and other Indiana Baptist volunteers are helping with cleanup work in Kokomo, which was hit by one of several tornadoes that ripped through the Midwest on Sunday, Nov. 17. Tornado damage was reported in Missouri, Illinois, Indiana and Michigan. Southern Baptist Disaster Relief has been involved in cleanup work in Missouri, Illinois and Indiana.

“Right now there is a big push of volunteers just showing up in these areas,” said Fritz Wilson, the North American Mission Board’s disaster relief executive director. “In a week or two others will be gone, but Southern Baptists will still be there in weeks and months to come.”

Indiana Southern Baptists focused much of their cleanup work on the hard-hit town of Kokomo. Larry Gates, the leader of the team in Kokomo, estimates that about 5 percent of the homes in the town have been destroyed. Many other homes have been damaged, he said.

“When the yellow shirts come in, they know who you are and what you stand for,” said Gates, a member of Plymouth Baptist Church in Plymouth, Ind. “Southern Baptist Disaster Relief does what’s needed for as long as you need it. I don’t care how long it takes; we’ll be there until they don’t need us anymore.

SBDR work in the hardest-hit area of Illinois—near the cities of Washington and Peoria—has been slowed by security concerns. Illinois Baptists have had feeding units set up in Peoria since Monday and expect to do so through next week. The city of Washington, one of Illinois’ hardest-hit towns, has been closed off to everyone but homeowners. Earlier in the week, SBDR volunteers were able to help a few Washington homeowners who made specific requests for assistance.

Illinois Baptist Disaster Relief coordinator Rex Alexander says he expects the city of Washington to open for outside help—including SBDR—this weekend. SBDR has been asked to help with childcare tomorrow at a disaster response center opening up in the Washington area. Alexander says a team of seven or eight volunteers will provide childcare and man an SBDR booth at the center to further help homeowners coming to the center for assistance.

Illinois Southern Baptist volunteers have had some of their most significant ministry opportunities in the town of Brookport, one of the hard-hit communities in the state’s southern tip. Chainsaw teams, along with chaplains, have served in the city throughout the week.

Jan Kragness, a volunteer chaplain from Third Baptist Church of Marion, Ill., says her team from the Williamson County Baptist Association had several opportunities to share the love of Christ with hurting homeowners in southern Illinois. Twice her team encountered residents who were near suicidal because of the tornado’s aftermath.

One of those was a despondent 16-year-old boy who had seen his deceased father be pulled out of his house. Kragness encouraged the boy, reminding him that his father wouldn’t want his legacy to end in his son’s suicide.

NAMB coordinates and manages Southern Baptist responses to major disasters through partnerships with 42 state Baptist conventions, most of which have their own state Disaster Relief programs.