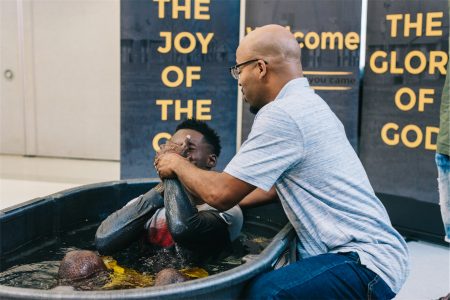 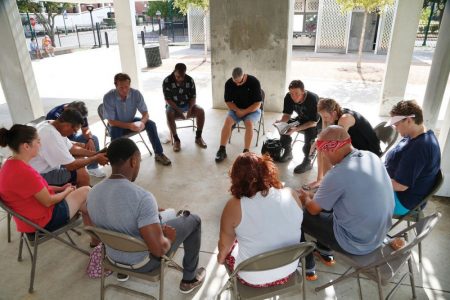 CONROE, Texas (BP) – Jeff Foshee was at the end of his rope. Haunted by depression, fear, and his own misfortunes, he felt he could not hold on any longer. Thanks to a friend’s guidance, Foshee’s next step landed him at the Houston-area Under Over Fellowship in Conroe. “When I first came to a Sunday service with Under Over, something clicked. It just felt like home,” Foshee says. “I have been here ever since.” Jerry Vineyard, meanwhile, also found himself at the end of his rope. After … END_OF_DOCUMENT_TOKEN_TO_BE_REPLACED 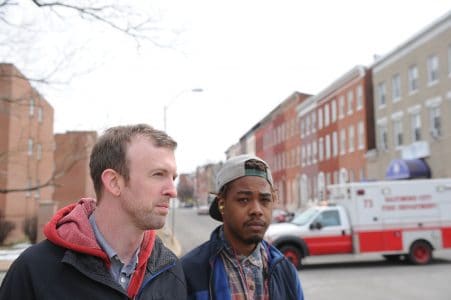 By Mike Ebert BALTIMORE – Joel Kurz watched in disbelief Monday night as the Baltimore neighborhood where he has pastored since 2008 erupted in violence and flames. “The CVS Pharmacy that was looted and set on fire is the place where our sick and elderly people go for their medicines,” Kurz said. “As you walk up and down the street, every strip of stores has broken glass. Many of them have been looted and damaged.” Kurz pastors The Garden Church, a congregation he started shortly … END_OF_DOCUMENT_TOKEN_TO_BE_REPLACED 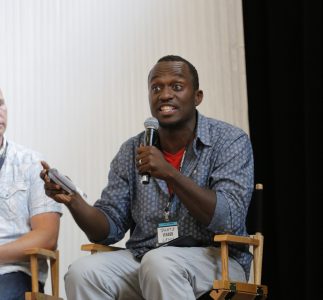 ALPHARETTA, Ga. – Abby Hughes is one of only two Generation Send (GenSend) campus mobilizers in the Northwest who is taking on the responsibility to find other college students to participate in GenSend 2015. “I have been working alongside my church, as well as reaching out to pastors around the Northwest to connect with students who could potentially take part in GenSend,” said Hughes, who will be leading a GenSend team in New York City this summer. GenSend is a development process … END_OF_DOCUMENT_TOKEN_TO_BE_REPLACED

BOSTON – In a meeting room at Boston’s Fenway Park, Southern Baptist church planter and Boston Red Sox chaplain Bland Mason explains how much members of his plant, City On A Hill church, long for community. “This is their family. This is who they pray with, worship with, grow with and do life with,” said Mason, whose church launched almost seven years ago in Brookline, Mass. “When it comes to church people, in this city you are either all in or not in at all.” There are no cultural … END_OF_DOCUMENT_TOKEN_TO_BE_REPLACED 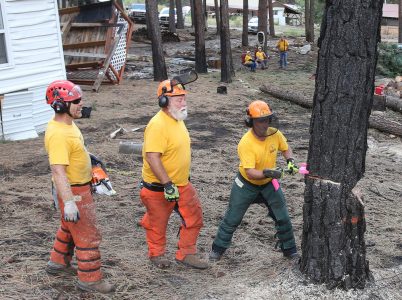 TWISP, Wash. – Patty Wetzel already knew the life-altering devastation that can come when fire strikes her home. She remembers well the night 37 years ago—as a young mother—when she and her family were forced to flee their burning home while still in their pajamas. Her family lost “everything” that night. Last month fear gripped her as she was given 20 minutes to leave her Twisp, Wash., home before the fire she could already see in the horizon reached her property. “It was just pure … END_OF_DOCUMENT_TOKEN_TO_BE_REPLACED 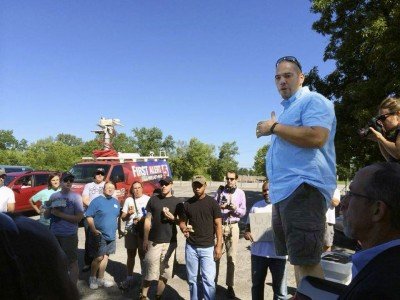 FERGUSON, Mo. (BP)—When The Passage Church, on the border of the St. Louis suburbs of Florissant and Ferguson, partnered with local church plants to initiate a cleanup effort of the area following Sunday night’s rioting and looting and multiple days of heated protests, they weren’t doing anything new. “We bring in anywhere between 8 to 15 mission teams every summer to serve the cities of Florissant and Ferguson — putting on block parties and reaching out to the community,” said Joe … END_OF_DOCUMENT_TOKEN_TO_BE_REPLACED 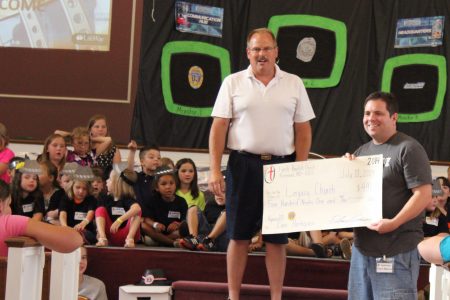 RICHMOND, Mo. - Children have been carrying bags full of pennies, nickels and dimes into Vacation Bible School in order to donate to Southern Baptist missionaries for years. Many never see what happens through their gifts or who benefits from them. But that changed this year at First Baptist Church of Richmond, Mo. July's VBS at the church concluded a week of learning about Send North America: Kansas City church planter Kevin Barnes-along with other missionaries-by meeting his family on … END_OF_DOCUMENT_TOKEN_TO_BE_REPLACED 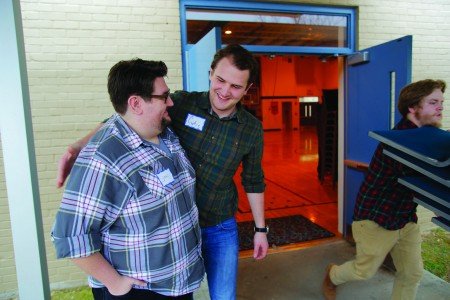 When Steve Tiebout planted a church in northern California in the late 1990s, he would have relished the help of a worship leader like 23-year-old Curtis Looper. Young, talented, full of energy and with a passionate love of Jesus, Looper already shows the God-given ability to prepare a congregation for corporate worship. And at age 23, he'll likely only get better. "Man, if someone would have sent me a 20-year-old who loved Jesus, could play the guitar and wanted to lead worship, I would … END_OF_DOCUMENT_TOKEN_TO_BE_REPLACED 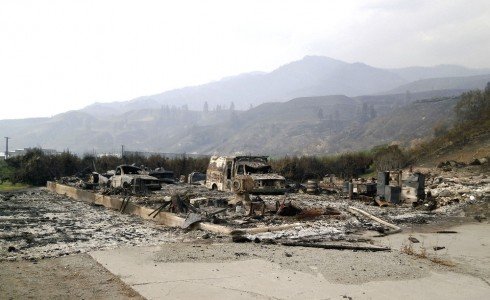 CHELAN, Wash. - Gerry Roe can't help but wipe away a tear when she thinks about it. An older gentleman limped on two crutches into an American Red Cross (ARC) feeding station servicing fire survivors at a senior center in Twisp, Wash. Though Roe was told later he was partially paralyzed, he wasn't looking for food for himself. He wanted to take the meals provided by Southern Baptist Disaster Relief (SBDR) volunteers to others in the community in need after fires in eastern Washington state … END_OF_DOCUMENT_TOKEN_TO_BE_REPLACED 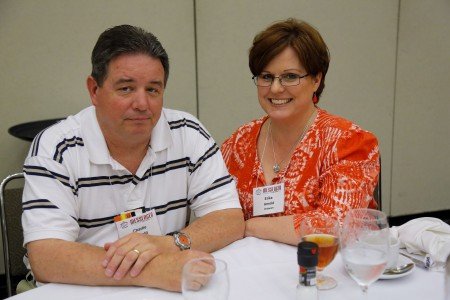 Joe Conway/North American Mission Board BALTIMORE – Some 200 Southern Baptist bivocational and small church pastors and their families gathered for fellowship, lunch, networking and encouragement on the final day of the Southern Baptist Convention (SBC) Annual Meeting in Baltimore, June 11. The SBC Executive Committee, the North American Mission Board and the New Orleans Baptist Theological Seminary partnered to sponsor the event. For Charlie Arnold the lunch was a reminder that he is … END_OF_DOCUMENT_TOKEN_TO_BE_REPLACED 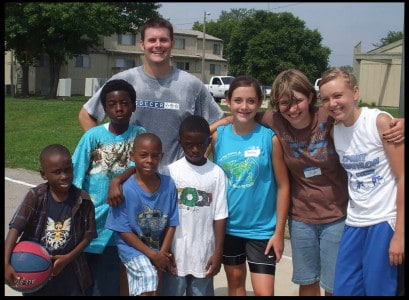 TOBIN PERRY/North American Mission Board LENEXA, Kan. – Westside Family Church feeds 3,000 kids daily in four countries. Families from the church have adopted more than 100 children in the United States and internationally. The Southern Baptist church helps fill backpacks with food for hungry children and teenagers. It is a regional support and training center for foster care and adoption in the Kansas City area. Yet, according to the Lenexa, Kan., church’s executive pastor Dan Chaverin, … END_OF_DOCUMENT_TOKEN_TO_BE_REPLACED