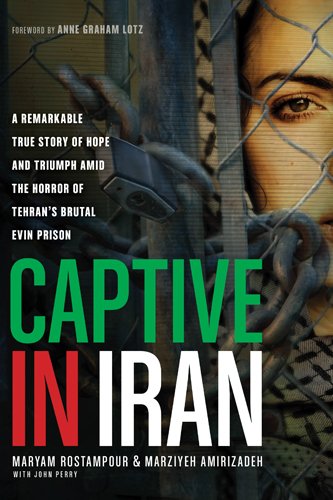 A powerful book by two Iranian Christian women who spent 259 days in the notorious Evin Prison in Tehran, Iran, in 2009, gives outsiders a look at the harsh conditions and brutal persecution Christians face within the prison’s confines.

Captive in Iran is the story of Maryam Rostampour and Maziyeh Amirizadeh who – over a three-year period – covertly put New Testaments in the hands of 20,000 of their countrymen, knowing that Islamic laws in Iran forbade them from sharing their Christian faith. They started two secret house churches, including one for prostitutes – many of them women who had been abandoned by their husbands and had no other way to support themselves and their children. Both knew they were putting their lives on the line. They had nearly been caught several times and it seemed like divine intervention when they were not.

But finally – perhaps inevitably – in 2009, the two young women were arrested and held in Evin Prison, a place where inmates are routinely tortured, and executions are swift and sudden.

“For all we knew, this could be our last day on earth,” they write.

“I hope you’ve been thinking carefully,” the interrogator said, nibbling on a piece of bread. ‘Have you?’

“I wondered if he knew how hungry we were, or if he always ate in front of prisoners.

“‘What should we have been thinking of?’ Maryam asked.

“‘About telling us what we want to know about you and your activities. I have checked your laptop and read all the evidence against you,’ he said sternly. ‘You must tell us everything about people you have contact with, which organizations you work with. Otherwise, we will lock your hands and feet together and beat you until you die.

“‘Think about that as you prepare for your interrogation.’ Pushing back abruptly from the table, he walked out.

“Despite our earlier bravado, we were afraid. For all we knew, this could be our last day on earth. We held hands and prayed for strength: ‘If we are tortured, give us the power to stand fast.’”

But something remarkable happened: Instead of succumbing to fear, they chose to take the radical—and dangerous—step of sharing their faith inside the very walls of the government stronghold that was meant to silence them.

In Captive in Iran, Rostampour and Amirizadeh recount how God used them to bring about a miraculous reversal: shining light into one of the world’s darkest places, giving hope to those who had lost everything, and showing love to those in despair.