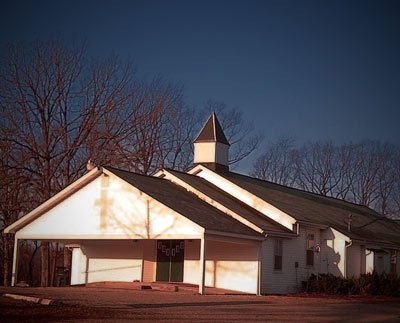 The Fulton team arrived April 1, finding a concrete slab north of the sanctuary building poured in November 2012. The Macon group arrived April 2. They left April 5, with the 1,500 square foot addition framed, minus roof, windows and doors.

Phyllis Rogers, wife of church pastor Jesse Rogers, said the day after the Baptist Builders left men of the church put most of the metal on the roof. Windows have since been installed on the west and north sides.

Danny Middleton of the Macon group said Baptist Builders go all over the country on such week-long projects.

“Last year we were gone 10 weeks (to building projects),” Middleton said, naming several upcoming in-state construction projects. “A month ago, we were working on the new state disaster relief building and they are talking about us putting a new addition on that.”

Baptist Builders often bring their air mattresses and sleeping bags. For the Mt. Olivet project, they slept in rooms at the nearby Heartland Christian Academy near Bethel.

One familiar face with the Macon group is Bob Klingenberg. The 81-year-old and early 1990s charter member is often on building and other mission projects.

“The Lord keeps me going, I say,” he said. “I endorse mission work. It keeps you young and healthy. They let me run my air nailer once in a while.”

He and several other Baptist Builders chuckled at the memory of that, recalling a mission trip where he accidentally nailed his air hose.

“We had scheduled this (fellowship hall construction) for March 1, but snow was so deep in Macon and Fulton, you couldn’t back up a trailer,” pastor Rogers said.

“This building provides handicapped access for the kitchen. The kitchen is now in the basement and when it rains, the basement floods, and sometimes the sump pump quits. We have a mold problem. The new fellowship hall will give us more space and will be more convenient.”

“I met a lot of the guys (Baptist Builders) through Disaster Relief. Dwain said they’d be glad to come here,” Rogers said.

The church is located west of Ewing on Missouri Route 156. Approximately 40 people attended Easter Sunday services before the teams arrived.

Rogers said Baptist Builders drywallers are to arrive around July 4, but he said there is a lot of work to do before then.

“God’s been good and he’ll provide the rest of the things we need,” Rogers said.