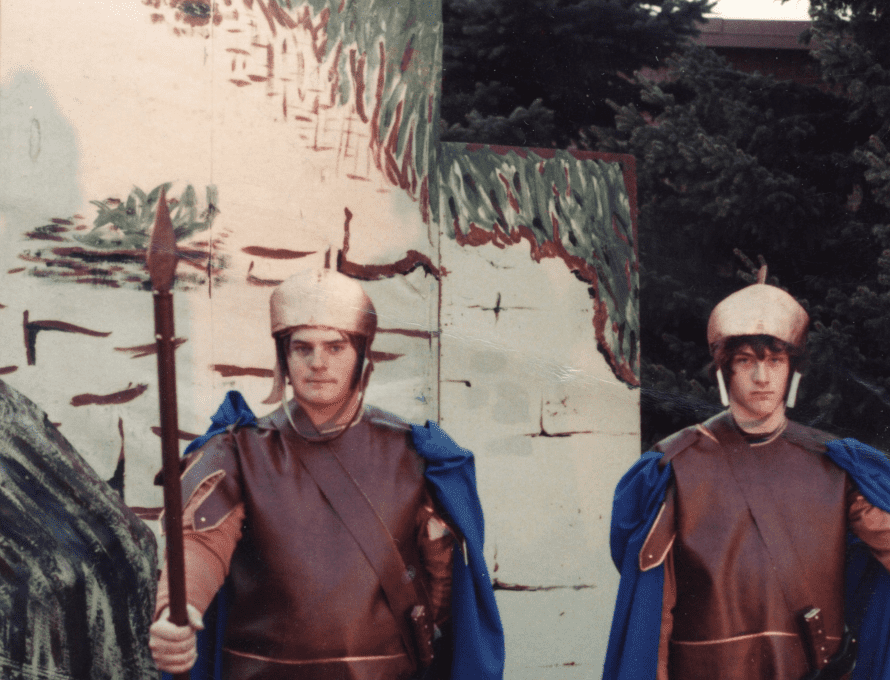 At left, Garry Garrison stands beside fellow church member Steve Biles as a Roman guard during Northwest Church's Good Friday dramatization in the early 1980s. Garrison, a deacon, has been part of the production for 45 years in that role. (Photo courtesy of Northwest Church)

MILWAUKEE (BP) – For Easter weekend 1972 Pastor Paul Becker decided to take advantage of Northwest Baptist Church’s location, adjacent to a main thoroughfare in the suburb of Wauwatosa. The result became a long-running witness to the community now spanning generations.

“The observance of Holy Week prior to Easter is particularly significant in Milwaukee, where liturgical churches predominate,” says an excerpt of “From a Small Stream: A Forty Year History of Minnesota-Wisconsin Southern Baptists 1953-1993.” Published by that state convention, it goes on to describe the tomb replica as consisting of plywood, paper mâché and canvas. A small campfire officially sanctioned by city leaders as a “barbecue pit” provided warmth for early spring nights that typically include chilly temperatures and even snow.

“It was the only sacred cow I was told the church had when I came here,” said the church’s current pastor, Paul Springer, Jr., on his arrival three weeks before Easter in 2017.

As the drama celebrates 50 years this weekend, Springer’s reasons for not changing it have nothing to do with keeping feathers unruffled.

“We’re known for it in the community,” he said. “I met folks last year who brought their grandkids to it and told me how they had attended when they were children.”

During the weekend the church also hosts an Eggstravaganza for children, where members in biblical dress tell the Easter account. Another outdoor drama Sunday morning depicting the Resurrection serves as the completion of the one that began on Good Friday. Afterward, a community pancake breakfast is held in the fellowship hall followed by another Easter service, this one indoors.

The staging and two Roman guards standing sentry draw attention throughout the weekend. Church members sign up for three-hour shifts in teams of three for breaks from the cold. A fire pit provides some warmth, but overnight temperatures this weekend are forecast to go below freezing, with wind gusts up to 20 mph.

“We might make it a group of four in each shift,” said Springer, which would allow more breaks.

Serving in the dramatization has become as much of a tradition as observing it. Northwest deacon Garry Garrison first suited up as a Roman guard when he was 15 – 45 years ago. In a video last month, he encouraged others to join him.

Garrison joins others who have contributed to interesting conversations in the role. Over the years patrons at area bars have pulled over late into the night, their attention snagged by the guards posted beside the large circular rock marking Jesus’ tomb.

“The Gospel has been shared during those times, with at least one person making a decision for Christ,” said Springer, a Minnesota native who previously lived in Chicago with his wife, Melissa, herself a missionary kid who grew up in Japan.

“Every year, the message of Good Friday and the entire Easter weekend remains relevant and helpful for people trying to make sense of their lives and the world around them,” Springer said. “Together, we ask the question, ‘Who is Jesus?’”

The church’s Good Friday Outdoor Crucifixion Drama will begin at 6 p.m. CST April 15 and can be viewed online. The Saturday Eggstravaganza occurs at 10 a.m. April 16, with the Easter Morning Resurrection Drama starting at 9 a.m. CDT.