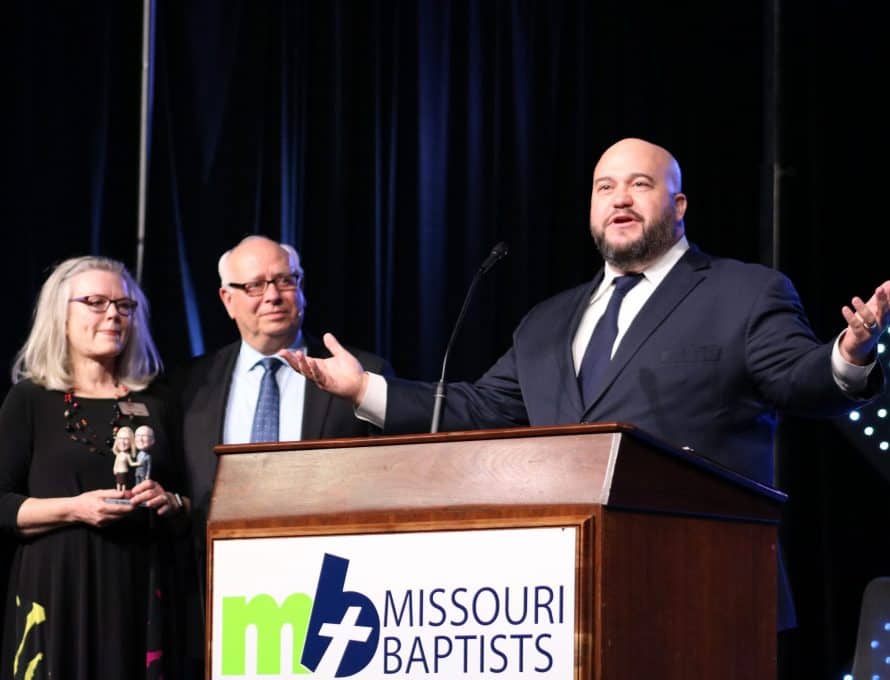 BRANSON – It was on the stage at the 2011 Missouri Baptist Convention (MBC) Annual Meeting that John Yeats was officially installed as the executive director of the MBC, so it was only fitting to mark his 10-year anniversary during the 2021 annual meeting here.

MBC First Vice President Chris Williams recognized Yeats prior to the executive director’s report to messengers, honoring him for 10 years of service not just Missouri Baptists, but “10 years of Kingdom work.”

“I think about the stability, reunification and Kingdom advancement throughout our state,” Williams said. “Your work has had gospel ripple effects not just across Missouri, but across the nation and the world.”

This also marks 25 years of Yeats serving the Southern Baptist Convention as its recording secretary.

Yeats has served Missouri Baptists alongside his wife, Sharon.

During his presentation, Williams told Missouri Baptists that Midwestern Baptist Theological Seminary is in the process of establishing an endowment for the John & Sharon Yeats Chair of Baptist Studies.

Messengers at the annual meeting also received a commemorative booklet highlighting Yeats’ ten years of service to the MBC. The booklet is titled, A Defining Decade: Missouri Baptists 2011-2021.

To say it has been an eventful 10 years is an understatement. Some of the notable events that have taken place during Yeats’ tenure include:

• Bringing litigation between the MBC and former/current entities to an end. By 2019, The Baptist Home (now Baptist Homes & Healthcare Ministries), Missouri Baptist University, and the Missouri Baptist Foundation had returned to the MBC fold. In the end, insurance paid back every dollar the MBC spent on legal counsel and using these proceeds, the MBC became debt-free.

• Revising governing documents, including the charter, constitution, bylaws and procedures. The revised documents allow greater synergy among the entities and ensured the protection of religious liberties for affiliated churches.

• A strategic shift toward greater ethnic reconciliation. “As a missionary staff under biblical authority,” Yeats said in a 2020 address to the annual meeting, “we embrace a calling that goes beyond tolerance, compliance, or obligation. We genuinely seek personal and community transformation with the gospel of Jesus Christ. Our community of Missouri Baptists should present a foretaste of the scene in heaven in which a rich diversity of people made in the image of God and transformed in to the image of Christ engage in a unified worship around the throne.”

• A renewed emphasis on the Missouri Missions Offering. Giving fell short of the goals every year between 2001 and 2011, including five years totaling less than $700,000. Beginning in 2012, with a focus on missions projects tied to the Cooperative Program, giving topped $700,000 for eight years running, including a record $821,799 in 2019.

Hundreds of convention-goers joined Yeats and his wife, Sharon, for a breakfast reception before the Oct. 26 session of the annual meeting, greeting them and expressing their appreciation for their service.