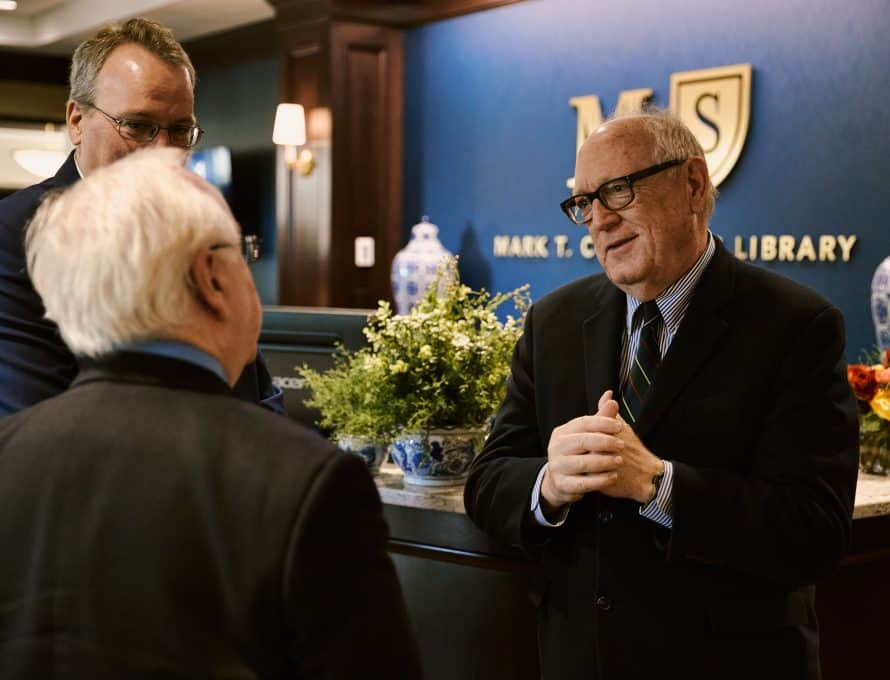 KANSAS CITY (MBTS) – Midwestern Seminary’s Fall Trustee Meeting, which was held Oct. 18-19, focused on gratitude for enrollment growth, the dedication of the seminary’s newly renovated library, the announcement of a forthcoming graduate-level missions’ program, and the election of new faculty members.

During his President’s Report, Jason Allen reminded trustees of the current state of theological education and reported record enrollment gains.

In presenting the school’s fall semester enrollment, Allen celebrated another year of enrollment growth, noting significant gains at the undergraduate, graduate, and doctoral levels. He also expressed thankfulness to God for continued enrollment increases, even as the institution has navigated challenges posed by the Covid-19 pandemic.

“We fully understand the environment in which we are operating,” Allen shared. “By God’s grace, we have weathered many challenges in the past 18 months. Now, we can look forward to all the Lord will continue doing at Midwestern Seminary and Spurgeon College. We remain grateful, too, for Southern Baptists’ continued trust and support as we press forward for the Church.

“Over the past academic year, our total headcount reached 4,720 students, compared to 4,374 for the 2019-20 academic year. Our continued focus is on our residential M.Div. degree program, but other avenues of training continue to flourish, including our online and doctoral studies programs.”

In his presidential address, Allen reiterated three critical questions that remain before the seminary. The questions were: 1) How do we maintain continued doctrinal faithfulness in the midst of a rapidly secularizing culture? 2) How do we ensure that we are most effectively carrying out our mission to be for the church?, and 3) How do we ensure that we are an ever-strengthening seminary in the ever-weakening context of theological education?

In answering these questions, Allen pointed to the essential role trustees must play in theologically securing and financially stewarding the seminary for future generations.

The seminary community celebrated the dedication with a formal ribbon-cutting ceremony in the library courtyard on Midwestern Seminary’s campus.

“This is a special day in the history of our institution,” Allen said, commemorating the occasion. “Dr. Coppenger and his wife, Sharon, served faithfully for four years here at Midwestern Seminary and did so at a critical juncture in the history of our Convention more broadly. Dr. Coppenger played a pivotal role in repositioning Midwestern Seminary theologically, bringing it into doctrinal alignment with the churches of the Southern Baptist Convention. In so doing he added many key faculty members who have been an important part of our work here over the last three decades.

“We are honored to recognize Dr. Coppenger in this way for his years of faithful service and for the courage and commitment to biblical orthodoxy he demonstrated in his role as president at Midwestern Seminary.”

Coppenger served as president at Midwestern Seminary from 1995 to 1999. Before taking on the role at Midwestern, Coppenger taught philosophy at Wheaton College (1975-81). He also served as senior pastor of FBC El Dorado, Arkansas (1983-1988), executive director of the State Convention of Baptists in Indiana (1988-1991), and vice president for Convention Relations at the SBC’s Executive Committee (1991-1995). Dr. Coppenger retired from the United States Army Reserve as a Lieutenant Colonel.

Coppenger, who was joined by his wife, Sharon, and several family members for a ribbon-cutting ceremony and library renovation unveiling, expressed gratitude for the recognition, reflecting on his experiences serving at Midwestern.

“I’m still astonished that the Lord would save me and use me, but what a privilege it was to serve at Midwestern,” Coppenger said. “When I first went to seminary, it was like drinking out of a firehose; it was a remarkable experience.

This fall, several display cases were installed throughout the library’s reading rooms, highlighting the contributions of Midwestern Seminary’s first four presidents, a sampling of the library’s rare book collection, a historical overview of the 1961 “Ralph Elliott-Genesis Controversy,” the seminary’s involvement with international missions’ efforts, and a display of artifacts from the seminary’s William Morton Collection.

A second major item of update was the announcement of a new graduate-level missions program aimed at equipping students desiring to serve in overseas ministry contexts.

The program is conceived as the master’s level equivalent of the FUSION program, a robust missions intensive program offered to undergraduate students through Spurgeon College. Like FUSION, the graduate-level iteration will be cohort-based and will feature opportunities for training and mentorship.

Midwestern Seminary President Jason Allen said the opportunity to extend Midwestern’s missions training efforts to the graduate level is the culmination of extensive planning and comes at an opportune time.

“Thanks to generous ministry partners, we can move forward with plans to further equip students for faithful work in ministry contexts around the globe,” Allen said. “We are hopeful students will benefit from close proximity to like-minded students in missions’ cohorts while receiving world-class training through a robust seminary-level curriculum. Due to generous donor support, the missions’ students will also be eligible for substantial scholarship support.

“Additionally, the investment of faculty members like Dr. Joe Allen and others who have a keen sense for how to pair missions’ knowledge with on-the-field experience will aid our students in preparing them for effective gospel ministry.”

“There are endless opportunities available for interested men and women to partner with Southern Baptist initiatives to bring the gospel overseas,” Duesing said. “Through this new graduate-level missions initiative, we hope to encourage students to consider career options for overseas ministry following an extensive short-term experience with Midwestern and the IMB. On the strength of our undergraduate FUSION program, our institution is well-positioned to equip and train master’s-level students for maximal gospel impact, partnering with SBC churches and the IMB, to the ends of the earth.”

Details about Midwestern Seminary’s graduate-level missions’ program, including admissions requirements and program structure, will be available later this fall.

Additional trustee business included the election of two professors to the faculty, the re-election of two professors, the approval of two sabbatical requests, and the reappointment of one faculty member. Trustees also approved an updated campus housing plan, adopted responses to two SBC referrals, and received and reviewed reports on the seminary’s financial position and endowment performance.