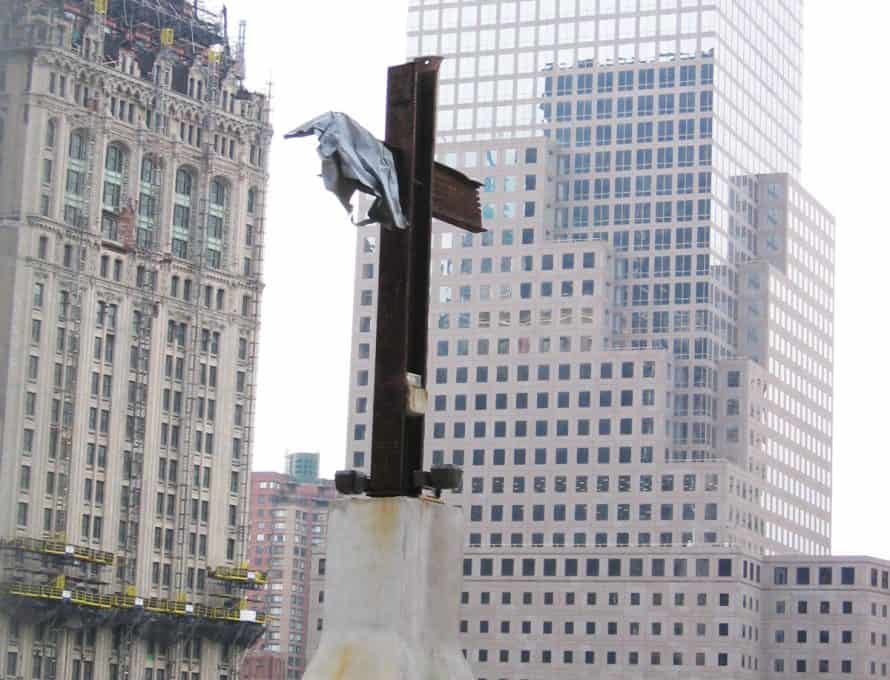 NEW YORK – The “Ground Zero Cross,” was discovered by Frank Silecchia in the wreckage of the World Trade Center here, Sept. 13, 2001. (Wikipedia photo)

Amid the tragic events of 9/11, many of us were dumbfounded by human depravity as we watched violent men, out of hatred and spiritual blindness, kill nearly 3,000 men, women and children.

Yet many of us were also speechless when we caught glimpses of the splendor and nobility of humanity.

We witnessed the depth of human wickedness on 9/11, represented by the terrorists who attacked the United States. But we also saw the greatest virtues of humanity, represented by the selfless heroes who risked – and often lost – their lives to save others. Among these heroes were:

• Todd Beamer and fellow passengers on United Flight 93, who resisted the plane’s hijackers, giving their lives to prevent more men and women from dying.

• Benjamin Clark, a former marine and a chef at the Fiduciary Trust Company in the World Trade Center, who helped save hundreds of lives from the 96th floor of the building. But, stopping on the 78th floor to help a woman in a wheelchair, he wasn’t able to escape before the building collapsed.

• Moira Smith of the New York Police Department, who died in the South Tower Sky Lobby of the World Trade Center as she directed people to safety. Twenty-two other police officers, as well as 37 Port Authority officers, died that day.

• Former New York City Fire Department Lieutenant Joe Torrillo, who was buried alive twice during rescue efforts at the World Trade Center. Though he has sustained lifelong injuries, he told visitors to a 9/11 memorial event at the Missouri State Capitol that he now lives to tell the stories of 343 other firefighters who died that day.

The 19th-century Anglican bishop J.C. Ryle once wrote that the paradox of human nature – with its strange blend of depravity with splendor, and baseness with nobility – “is a sore puzzle” to unbelievers.

“But,” he writes, “it is a knot that we can untie with the Bible in our hands. We can acknowledge that man has all the marks of a majestic temple about him—a temple in which God once dwelt, but a temple which is now in utter ruins; a temple in which a shattered window here, and a doorway there, and a column there, still give some faint idea of the magnificence of the original design, but a temple which from end to end has lost its glory and fallen from its high estate.”

Nothing explains this paradox except the Christian view of humanity’s creation in the image of God and subsequent fall into sin, Ryle reminds us.

But nothing truly solves the problem of human nature except Christ’s cross. For at Calvary, love collided with hatred, wrath with mercy, sin with righteousness and pain with healing. At Calvary, Christ “was pierced because of our rebellion, crushed because of our iniquities; punishment for our peace was on him, and we are healed by his wounds” (Isaiah 53:5). By His death and resurrection, Christ Jesus defeated human depravity, and He offers salvation to all who place their trust in Him. And, as He promised, He will soon return to make all things new and wipe away all sorrow and death.

In the long hours after the 9/11 terrorist attacks, excavator Frank Silecchia dug through the wreckage of New York City’s World Trade Center, searching for bodies and, hopefully, for survivors.

“I’ve been through hell,” Silecchia said a year later, describing his experience to the Canadian Bible Society. “I’ve seen hell on the inside. It’s a raw force. I have no desire to see it for all eternity.”

But at dawn of the third day, just after he helped pull three bodies from the debris, Silecchia spotted something that brought hope not only to himself, but also to the nation. Amid the rubble of the World Trade Center’s North Tower, there lay a 20-foot cross of steel. Broken and exhausted, he fell to his knees and wept.

Even so, 20 years after 9/11, God still hasn’t deserted us, but He continues to offer us hope, healing and salvation through the cross of Christ. For that reason, as Silecchia said, we should bring “all our sorrows and burdens to the cross, all our pain and suffering. … God is still here helping people.” Why not come to Him today?