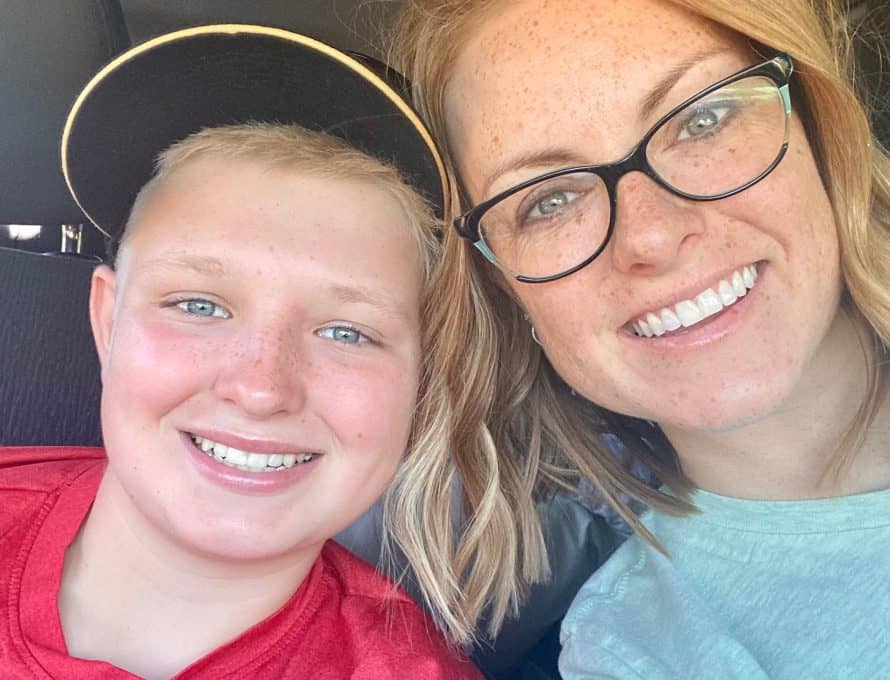 HANNIBAL – Amber Grayson passed along the blessing of Super Summer to another generation, attending the Missouri Baptist Convention camp with her son, Gaven, last month. (Photo courtesy of Amber Grayson)

HANNIBAL – Nearly two dozen teenagers professed faith in Christ during the Missouri Baptist Convention’s (MBC) Super Summer last month, and many more students grew in their faith throughout the camp.

The MBC’s Making Disciples group held two sessions of Super Summer at Hannibal LaGrange University, hosting 174 teenagers during the first session and 95 during the second session.

Amber Grayson, a member of First Baptist, Owensville, isn’t surprised that Super Summer transforms students’ lives. As a teenager, she surrendered her life to Christ, grew in her faith and learned how to share the gospel through Super Summer. She came back year-after-year, and now as a teenager’s mother she was back at the camp this summer.

“I am now 36 years old, and Super Summer remains one of the most spiritually influential aspects of my life,” she said. “God blessed me with the ability to go, and I believe I am where I am now because of it.

“I’ve attended 11 years total, as a student for five years, and I couldn’t get enough, so I came back as a ‘mom’ to lead small groups for four years while in college. I then went while my four children were babies with our church youth group ….

“2021 was the first year my son, Gaven, was old enough to go,” Grayson added. “So we loaded up and went, just the two of us! My son absolutely loved it and learned to ‘SOAK’ Scripture and share his testimony. He wants to come back next year and bring friends. It is my goal to see our church youth group begin to attend Super Summer again, so look for more than just my son and me next year!”

Travis Smith, student pastor at Calvary Baptist Church, Republic, said this year was his students’ first experience of Super Summer. And he had no regrets in bringing them.

“Plenty of camps will be a blast for your students, teach solid biblical truth, and be a safe environment for your students,” Smith said. “Super Summer is no exception. My students had an absolute blast. However, Super Summer outshines them all with a focus on the Gospel of the Kingdom of God, discipleship, networking, and training up leaders. I have been to a lot of camps in my time in student ministry. There are other camps that come really close to the caliber of Super Summer, but they are also double the cost.

“With the impact of the pandemic on families, I needed a camp that was cost effective for families but I didn’t want it to feel subpar in anyway,” Smith added. “I am so grateful to the MBC and it’s leadership who made camp happen this year.”

Although Super Summer had a different dynamic this year because of COVID-19 precautions, MBC Making Disciples Director Brad Bennett said he hopes the camp will return to its more regular schedule next year, if possible.

Bennett also said he wants to see an even greater emphasis on preparing students to share their faith and to go on mission for Christ on their school campuses.

To learn more about Super Summer or to see video highlights from this year’s camp, visit https://mobaptist.org/student-ministries/super-summer/.