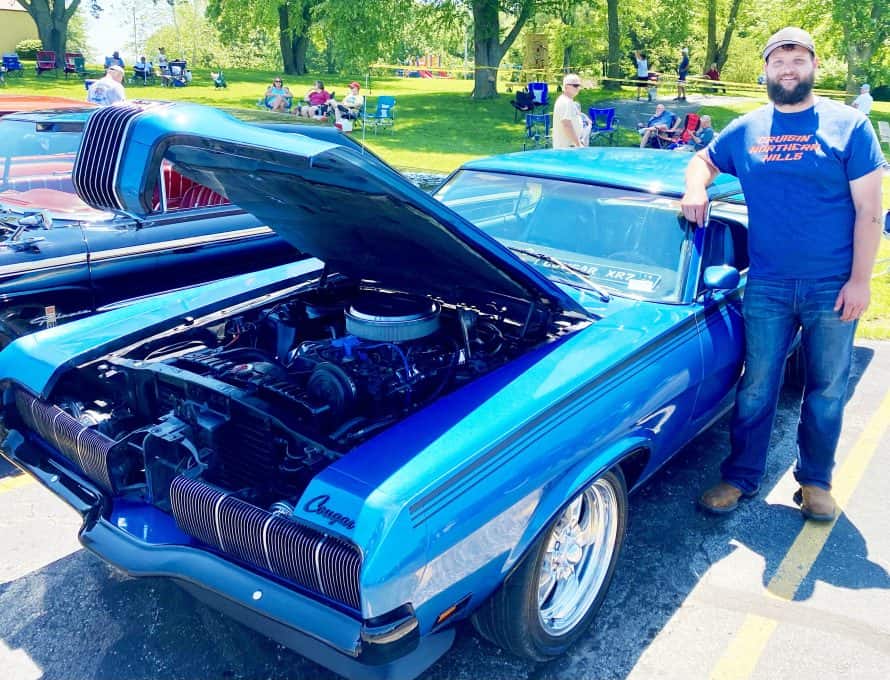 HOLT – John Newsome, a member of Northern Hills Baptist Church, here, stands by his 1970 Mercury Cougar XR7. Newsome’s car was one of 70 cars that came to Cruisin’ Northern Hills, a car show hosted by the church. (Pathway photo by Brian Koonce)

HOLT – There were a lot of conversations happening at Cruisin’ Northern Hills, a June 5 car show at Northern Hills Baptist Church just north of Kansas City, and only some of them were about cars.

For example, John Newsome, a member at the church, was more than willing to talk about his pride and joy, a 1970 Mercury Cougar XR7. For those in the know, the details are everything.

“It’s a 351 Windsor,” he said, referring to the car’s powerplant. “There weren’t a lot of ‘70 Cougars that came with that motor. It’s Bright Blue Metallic with Medium Blue interior, has Eliminator side stripes and the Eliminator hood scoop, PROMAXX heads, 17-inch wheels. Another thing that makes it different from most is that it has blacked out bumper trims. It’s a toy my wife and I have fun with.”

But among the engine revs, food truck and giveaways, there were other conversations happening beyond which factory options were on which car.

“What a good way to get everybody out, meet new people, fellowship around cars and have some gospel conversations,” Newsome said.

Newsome and his Cougar have been a part of various car events throughout the region, so he reached out to groups that made the trip to Holt.

And the turn out made it clear Newsome isn’t alone in his passion for the automobile. More than 70 people – the vast majority from outside the church – brought cars to be to be part of the church’s first car show, and hundreds from the community came to see the chrome and carefully waxed paint. The rides on display ranged from a 1929 Model A to brand new Mustang Shelby GT350s. Along the way, they made contact with the church and heard the gospel.

Newsome said he hopes this is the first of an annual event at the church.

“For the first time, I’m really pleased,” he said.