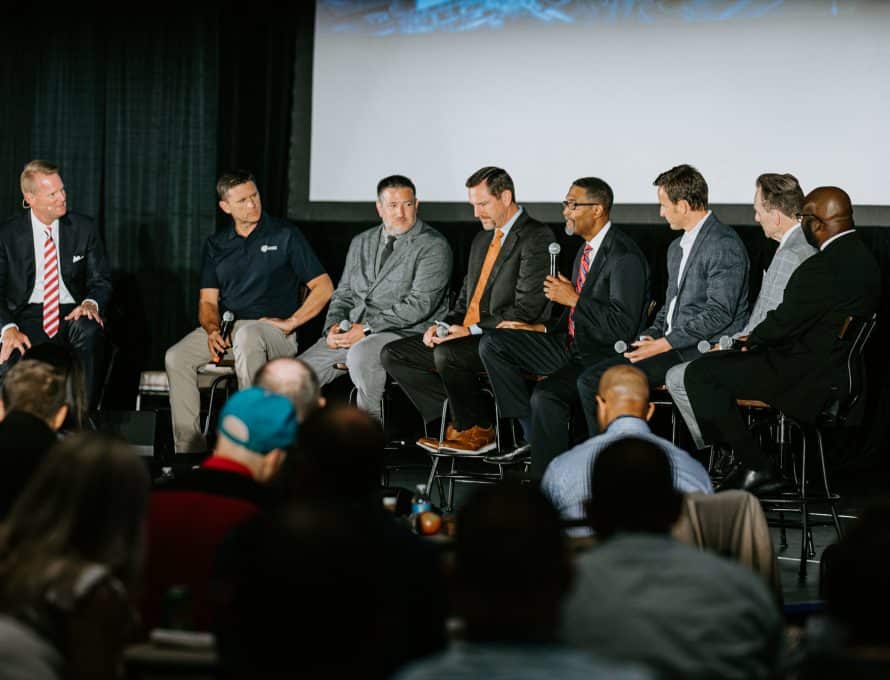 NASHVILLE (MBTS) – Focusing on the topic of the future of ministry and mission within the Southern Baptist Convention (SBC), Midwestern Seminary President Jason Allen moderated a panel discussion during the 6th annual For the Church Regional Micro-Conference held June 15 at the SBC annual meeting here.

In his opening remarks, Allen noted the 2021 Annual Meeting is a “historic” occasion with a compendium of issues bringing the future of Southern Baptists to the fore of online and offline conversations.

“In recent days, I’ve encouraged many to think about their own personal experience within the Southern Baptist Convention. To me, the Convention is countless churches I know of that are doing faithful work. The Convention is dozens of missionaries around the world and church planters around the country who are doing faithful work. The Convention is churches I preach in, and the one I am a member of, doing good and faithful ministry, and it is thousands of students training at Midwestern Seminary who are full of conviction and gospel passion.”

Drawing on the theme of Southern Baptist perspectives, Allen posed a question to Paul Chitwood related to the “This is the SBC” hashtag, which trended in recent weeks on social media. Chitwood reflected on his upbringing in Southern Baptist churches and Southern Baptist’s generosity and impact at various stages throughout his life. He noted the hashtag was a simple way of celebrating what is good about the SBC.

“The Convention is far more diverse in terms of opinion, and even in terms of ethnicity, than many people realize,” Chitwood said. “But what brings us together is not so much a shared opinion on every issue, but an insistence on fulfilling the Great Commission and the recognition that we have a better opportunity to advance the Kingdom together than we do on our own.”

Smith and Charles Jr. added their own perspectives as African American pastors within the SBC.

“I’ve spent 30 years answering why I’m Southern Baptist,” Smith said. “It’s a common question, and the answer is always the same: missions, methodology, capacity, and breadth. The most budget-friendly congregation still can’t do individually what it can do as it partners with the Southern Baptist Convention. The congregation raising up missionaries and church planters cannot do individually what it can do when it partners with other churches. Our theological convictions, the Baptist Faith and Message, and our missions methodology allow us to cooperate for the spread of the gospel around the world.”

Charles Jr. added that he is often unable to speak about contentious issues theoretically because members of his church are busy living through many of the problems in their day-to-day lives.

“It takes only a few voices to disrupt unity in our churches,” Charles Jr. said. “I pray that those who have voices (in our Convention) use them to provide ‘air cover’ for those of us on the ground. This is spiritual warfare, and there are young African American pastors who need the ‘air cover’ that the SBC can provide on doctrinal matters, mission education, and church planting.”

Allen then prompted Carter, Wilson, and Mandrell for comments related to the next generation of Southern Baptists and the zeal many young people in the Convention demonstrate for gospel ministry.

Carter noted previous generations of pastors and ministry leaders have done an excellent job of setting systems in place that future generations can build upon to advance the mission of the Church.

Wilson, citing his experience training young men for ministry in his local church’s pastoral residency program, added that the next generation of ministry leaders demonstrates strong fidelity to Scripture.

“They are anchored in the Word of God,” Wilson said. “They are anchored in its inerrancy, but also its sufficiency and its authority. That makes me hopeful. I can’t wait to be pastored by these men, to be a faithful older saint in a church that is energized by this younger generation.”

Floyd noted that a strong sense of vision has strengthened Baptists’ combined efforts in every generation, saying, “We’ve been commissioned to take the gospel to the world. We will continue talking about missionary sending. We’re going to talk about planting gospel churches. We’re going to talk about the importance of issuing a massive invitation to people to follow the Lord and to go into