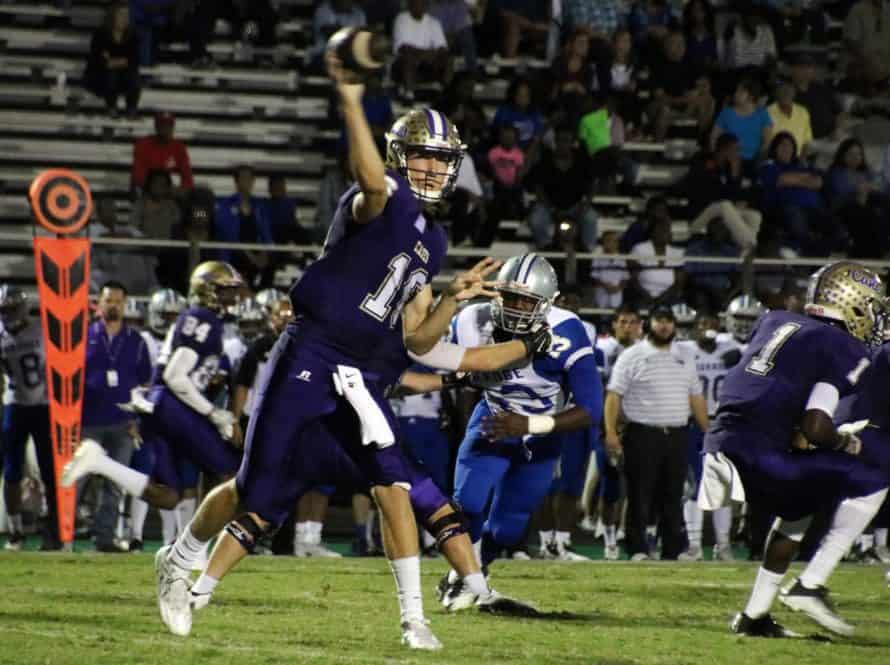 CARTERSVILLE, Ga. – Trevor Lawrence rolled up the stats in his four years as starting quarterback for the Cartersville Purple Hurricanes, including career state records in passing yardage and touchdowns while compiling a 52-2 record and two state championships. (BP photo)

In January 2019 Lawrence hit the national spotlight in leading Clemson over Alabama in the national championship, the fantastic opening act of a collegiate career that culminated in his all-but-guaranteed place as the top pick in tonight’s NFL Draft. Over that time, the spotlight has only grown hotter and the magnifying glass larger. Qualifiers like “generational” follow him in articles and tweets.

And as his fame grew, so did the recognition of Lawrence’s grounding as a follower of Christ. And yet, Jeremy Digsby also remembers him as the 12-year-old kid hanging out with his buddies in Sunday School at Tabernacle Baptist Church. 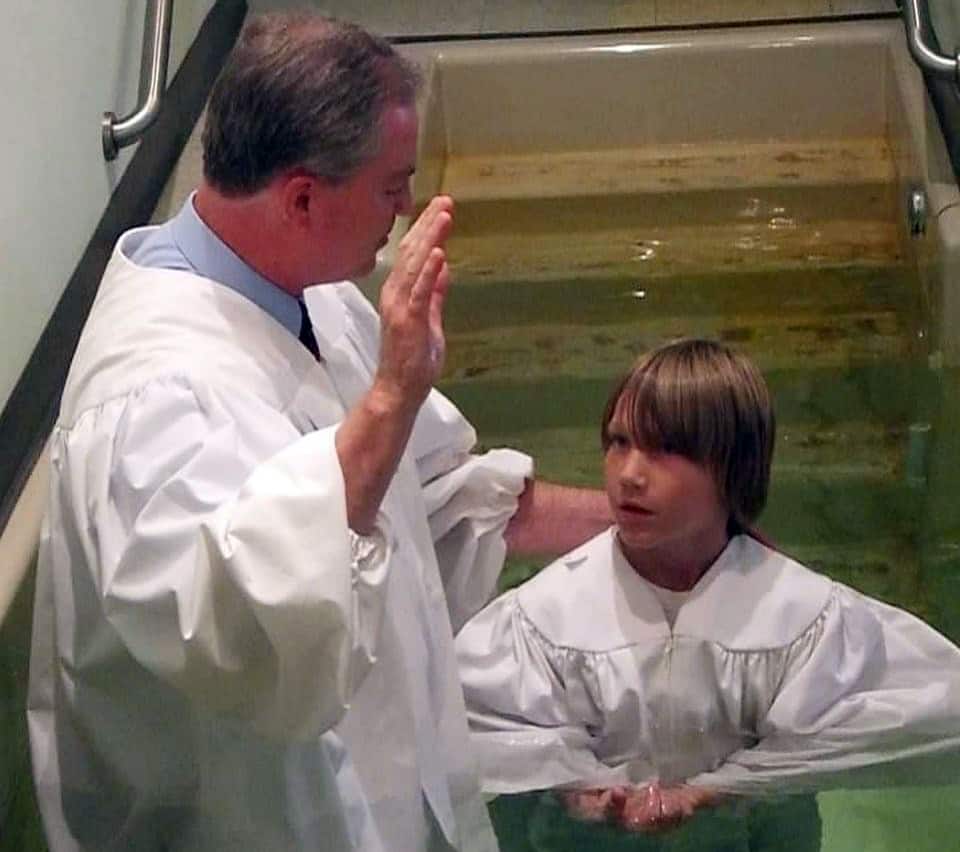 “His family was faithful attenders. Trevor was part of a Life Group (small group) study and was there most Wednesday nights. He was a pretty consistent attender,” said Digsby, who was Tabernacle’s middle school pastor during most of Lawrence’s time in school.

“He was pretty faithful in attendance and just one of the guys. He wouldn’t just sit there, but answer questions and be a part of the discussion,” said Tipper, now pastor of Greenlee Baptist Church in Old Fort, N.C.

Lawrence wasn’t as active at church in his later years of high school. During that time, he became nationally known among football recruiters, and in his senior year, he established new Georgia state records in passing yards and touchdowns. Those things don’t happen without hours of preparation and work on the field.

But that doesn’t mean that Christian leaders were absent or a spiritual groundwork missing. Cartersville’s head coach at the time, Joey King, was known for modeling his faith among players and was a popular speaker at men’s ministry events at area churches.

“Trevor was blessed to be around a lot of good, Christian people in Cartersville,” said Jay Mayo, a longtime friend of the Lawrence family and deacon at Tabernacle. “His quarterback coach, Ron Veal, and Joey are two really strong Christians. Any dad would want Joey King to be his kid’s head coach.

“My dad was a high school coach for 36 years and was around a lot of people like Joey. I saw what a Christian man should be when I was around them. God uses those circumstances, and when I look back on the people the Lord put in Trevor’s life, I see the results today.”

When Mayo was a Cartersville City rec basketball coach for 7-year-olds, he saw the kid with the “surfer haircut” and knew that Lawrence wasn’t going to be just any athlete. Instead, Mayo nicknamed Lawrence “the squirrel” that season for the frenetic way he covered the court as a pretty good shooting guard.

“He was always everywhere all the time,” Mayo said.

Mayo’s son on the team, Joshua, and Lawrence became close friends, spending time together on trips for their travel baseball team and with the Tabernacle youth group.

“Sports helped us form bonds with his family and others,” Mayo said, adding that similar bonds formed at a weekend discipleship events or other church excursions in which Lawrence took part.

Richard Brown, longtime education minister at Tabernacle, and his family began forming a close bond with the Lawrences not long after the Browns moved in next door.

“We became good friends as neighbors,” said Brown, whose daughter, Erin, graduated alongside Lawrence at Cartersville High in 2018. Each Christmas the families and several others without relatives in the area would pool their leftovers from dinner and hang out.

“[The Lawrences] were some of the best neighbors we ever had,” said Brown, who is now interim pastor at Friendship Baptist in Cartersville. “Jeremy and Amanda were part of our Sunday School and discipleship program for years. When school started there were times they couldn’t take Trevor to school, so he’d ride with my wife (Denise) and daughter.”

After Lawrence’s stellar prep career at Cartersville High, he enrolled early at Clemson in January 2018. Being the hotshot recruit on campus and out of his parents’ house at a time when he should still be in high school might not have the been the best for him, he admitted to Sports Illustrated last summer.

Dan Lian, associate pastor at Newspring Church in Anderson, S.C., said that at the time Lawrence wasn’t living in an “honorable way.”

Later on, Lawrence met Lian and the two clicked. They grew closer, and when Lawrence attended a Christian retreat with thousands of others in Florida later that summer, something shifted. He began to realize that he wasn’t just a football player, but something much more.

“As you grow in your faith, there is a defining moment where you’re mature in it. That’s what happened to Trevor,” said King, who, after leaving Cartersville, had a couple of coaching stops in college before becoming head coach at Carrollton (Ga.) High. “When you go to college, people are pulling you in different directions. Sometimes it’s isolation and solitude, not doing what everyone else is doing, that helps.”

Since that time Lawrence’s walk and witness have become more pronounced. It’s common to see Bible verses in his social media feeds. And he is known to use his platform for the sake of others. Last summer, the college football player with the most to lose led the #WeWantToPlay movement on social media when colleges were thinking of shutting down the season. Lawrence also lent his support and voice to an on-campus event calling for racial equality and unity.

Those values showed through on a muggy, August Saturday morning in Cartersville after the first game of Lawrence’s senior year. The night before, the defending state champion Purple Hurricanes had easily dispatched another defending state champ – one division higher, mind you – and Lawrence joined his teammates for an 8 a.m. two-hour minicamp for kids in the local parks and rec football program.

Of course, at the end of it, you-know-who was bombarded by parents wanting a photo of him with their son (this author included). Lawrence obliged with no hint of superiority or indication that he just wanted to leave so he could cross highway 41 for some chicken minis.

In January 2019, the Browns lost their 23-year-old son, Lane, to suicide. Immediately the Lawrences joined others in ministering to the grieving family. Amanda Lawrence, in particular, took charge in organizing the flow of well-wishers into the Brown home that night.

“Jeremy and Amanda did a magnificent job of loving on us,” Brown said. “They wanted to protect our privacy as much as possible and helped with those bringing food in. She was one of several to do it and my family will never forget that.”

Lawrence attended the viewing at Tabernacle two weeks after the biggest win of his career. Unannounced except to his family and the Browns, he drove in from South Carolina to pay his respects and let his former neighbors know he loved them and was praying for them.

“He didn’t have to do that,” Brown said. “It was a surprise to many because he didn’t want to take any attention from us or Lane. We’ll always appreciate the fact that he wanted to minister to us.”

In June 2019, young Brody Parker, 9 years old and a member of First Baptist Church, experienced a heart emergency that required a transplant and two-month hospital stay in Atlanta. Like so many other kids in Cartersville, he had – at least temporarily – switched his normal college colors to Clemson orange and number 16 jerseys.

Brody’s Lawrence fanaticism was solidified when his hero spent a few hours with him one day at the hospital.

Early in the COVID shutdown, Lawrence and his then-fiancé Marissa Mowry (also a Cartersville native) received permission from the NCAA to begin a relief fund for those affected by the coronavirus pandemic in their hometown and upstate South Carolina (While Trevor led the Tigers, Mowery played soccer for nearby Anderson College.).

“Trevor asked us if he could help provide food for people,” said Steve McCombs, who has been on staff at Tabernacle for more than 27 years, 13 of those as student pastor before his current position as missions/outreach pastor. “The foundation set up by him and Marissa helped our Bread of Life ministry as well as so many others in the area.”

More recently, the couple, who married April 10, announced they would donate $20,000 to Jacksonville-area charities after Jaguars fans bought items off the registry for their future quarterback.

Such acts aren’t surprising for Lawrence’s former high school coach. King, a pretty decent Georgia high school quarterback in his own right for the Cedartown Bulldogs with 5,000 career passing yards, had no relationship with his father and learned about being a man from coaches. Most notable among them was his grandfather, Joe Kines.

Those lessons taught him that football can be important, but it can’t be the main thing.

“To whom much is given, much is required,” King told the Cartersville Daily Tribune Tuesday (April 27) in paraphrasing Luke 12:48. “[Lawrence] understands that and is grateful for that. That’s one of the things I always preached to my teams [in Cartersville] and to my new team. One of our core values here is gratitude.”

Yes, Lawrence is different. What other sure-fire top draft pick goes out of his way to risk injury by advocating for a season that will give teammates a chance to increase their own NFL stock? What 21-year-old soon-to-be multi-millionaire marries his junior high sweetheart? What face of the franchise is comfortable enough in his own skin to say, as he did recently, that he doesn’t need football to be OK?

Such positions can shock a world that lives in extremes. Those who know Lawrence laugh at any notion that he lacks in competitive fire. It’s just that he’s extremely focused and alright with who he is.

“He’s attained such a big platform and is saying what we’ve heard all along, that’s he’s a child of God,” Mayo said. “God gives us our talents to develop for His glory and His purpose.”

The kid Mayo nicknamed “the squirrel” keeps things a little more under control these days. With the platform he’s received, there’s a purpose behind his actions.

“He doesn’t get distracted about what he’s supposed to do,” Mayo said. “The only expectation he’s worried about is God’s expectation of him.”