Coronavirus activity in Missouri has declined steadily for the past two months and average number of daily cases remains the second-lowest in the United States, trailing only Hawaii. COVID-19 hospitalizations fell below 1,000 for the first time since September and have dropped by 64 percent since the first week of January. Deaths are rapidly declining as vaccines become more available, especially to those 65 years of age and older. Three vaccines have now been approved and are being distributed. They include the two-shot Pfizer and Moderna vaccines and the latest Johnson and Johnson vaccine which requires only one shot. 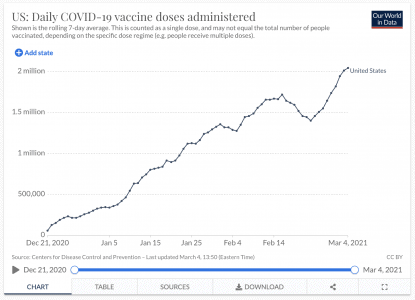 I received the Moderna vaccine in February. I am thankful to The Baptist Home staff and President Rodney Harrison for making it possible. The two shots were administered within three weeks of each other, and I had no side effects in either case. I do not know of anyone who has experienced any negative side effects.

My 86-year-old mom recently received her first shot (the Pfizer vaccine) and will receive her second dose in a few days. She, too, has suffered no negative side effects. My brother and sister – both in their 50s – have chosen not to vaccinate and both have suffered from COVID, though both recovered after being bedridden for nearly two weeks.

There has been much written and discussed about the vaccines, and leading Christian ethicists have concluded that anyone choosing to take any of the vaccines may do so safely and with a clear conscience. Much of the controversy has stemmed from reports that the vaccines are derived from stem cells of aborted babies in the 1970s. Southern Baptist ethicists like C. Ben Mitchell, Andrew Walker and Matthew Arbo have written that an individual is not formally cooperating with a moral evil when using a vaccine developed thanks to an abortion. Furthermore, no abortions occurred in the development of the COVID-19 vaccines. “Nor is it certain the original abortions from which the cell lines were initially established were performed for the sake of research or developing vaccines,” the three ethicists wrote for the Witherspoon Institute’s journal, Public Discourse. “The cell lines involved in developing and confirming the viability of COVID-19 vaccines were used as a result of previous abortions. They were not the cause of any new abortion.”

Some have worried that the speed with which the vaccines have been created has made them unsafe. There is no scientific evidence to support such claims. In fact, just the opposite is true as protocols followed by the Federal Drug Administration are rigorous and include months of safety surveillance. Whatever side effects surface – like headaches, fatigue and pain at the injection site – are real, but relatively minor and manageable.

I urge Missourians, especially those with serious pre-existing conditions and those over age 65 to get vaccinated. Christians should vaccinate because we love our neighbors, nor do we give in to fear mongering. Being vaccinated demonstrates that we are about the common good. Likewise, we must acknowledge the sincerity of those whose consciences disagree in good faith. Christian liberty requires that each person be free to choose whether or not to receive these new vaccines.