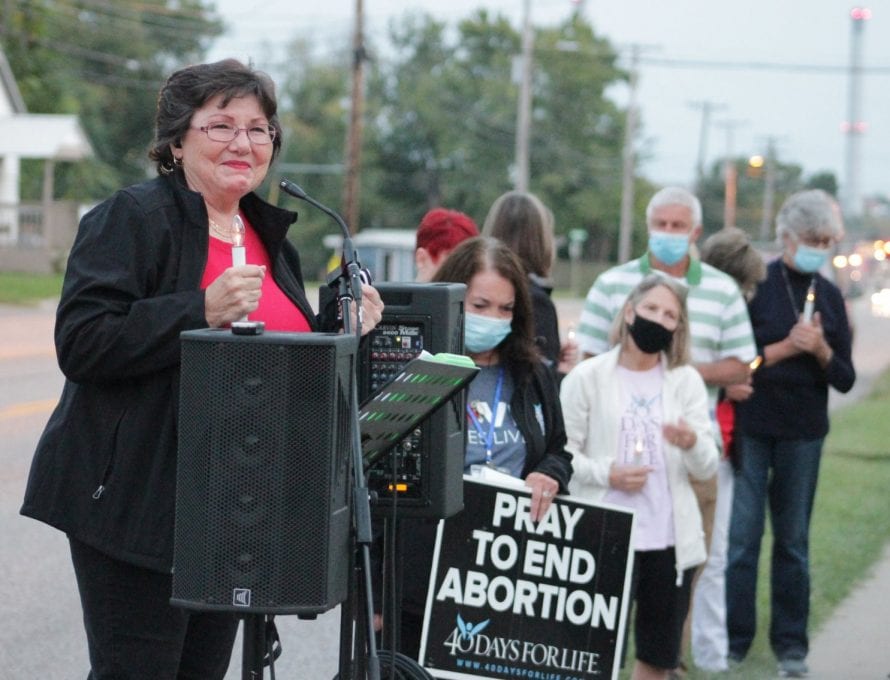 COLUMBIA – Pro-life advocate Bonnie Lee, a member of the Missouri Baptist Convention executive board, leads about 60 participants in prayer to begin a Sept. 22 kickoff rally and candlelight vigil on the public right of way outside Planned Parenthood in Columbia. The group of Christian prayer warriors had gathered to mark the beginning of the 40 Days for Life Campaign here, which continues through Sunday, Nov. 1.

But, if Roe v. Wade is overturned, Missourians must be all the more vigilant to protect the unborn and to reach out to hurting parents and children across the state, they said.

Barrett’s confirmation hearing in the Senate began, Oct. 12. Both Missouri Senators Roy Blunt and Joshua Hawley have expressed their support for the Supreme Court nominee.

This summer, Hawley also expressed his intention to vote only for a Supreme Court nominee who “explicitly acknowledged that Roe v. Wade is wrongly decided.”

“I don’t want private assurances from candidates,” Hawley said, according to a July 26 Washington Post article. “I don’t want to hear about their personal views, one way or another. I’m not looking for forecasts about how they may vote in the future or predications. I don’t want any of that. I want to see on the record, as part of their record, that they have acknowledged in some forum that Roe v. Wade, as a legal matter, is wrongly decided.”

According to the Associated Press, Barrett wrote in a 2013 Texas Law Review article that the reversal of judicial “precedent” is not “out-of-bounds” in the American legal culture. Also, according to FOX News, she signed onto a newspaper ad in 2006 that called for the overturning of Roe v. Wade.

Susan Klein, the executive director of Missouri Right to Life and a member of Cedar Grove Baptist Church, Holts Summit, said Barrett’s opposition to abortion has largely set the tone of her Supreme Court confirmation process.

“Make no mistake, the battle to confirm Amy Coney Barrett as the next U.S. Supreme Court Justice will be about abortion because the Democrat party and pro-abortion Democrat Senators will oppose any nominee, no matter how qualified, if the nominee has not pledged to uphold and maintain abortion on demand,” Klein said. “Barrett is well qualified and is a strict constitutionalist and will serve our nation well as the next U.S. Supreme Court Justice.”

Timothy Faber, a member of the Missouri Baptist Convention’s (MBC) Christian Life Commission (CLC) has called for the abolition of abortion, including in a recent resolution he submitted to the MBC. Nevertheless, he said, a Supreme Court nominee’s commitment to the “original intent of the Constitution,” rather than to any views on particular issues like abortion, should be key in determining his or her qualification to serve on the nation’s highest court.

MBC Executive Board member Bonnie Lee agreed. Lee serves as the discipleship ministry and religious liberty and ethics specialist at Mid-Missouri Baptist Association, as a Sidewalk Advocate with 40 Days for Life, and as part of the legislative arm for Team P.L.A.Y. (Prayer, Legislation, Activity, and You; a collaboration of organizations and individuals dedicated to protecting unborn babies in Missouri).

A call to vigilance

But how should Missouri Baptists respond if Barrett is confirmed in the U.S. Supreme Court and if Roe v. Wade is ultimately overturned?

According to Lee, they should be even more vigilant in advocating for the life of the unborn and for the wellbeing of hurting parents and children across the state. If Roe v. Wade is overturned, the question of abortion goes back to each state, and in Missouri that would mean the end of legalized abortion.

Last year, Gov. Mike Parson signed into law the “Pain-Capable Unborn Child Protection Act,” which bans all abortions in the state – except those necessary to save the life of the mother – if and when the U.S. Supreme Court overturns the Court’s 1973 Roe v. Wade decision. But proponents of abortion have and will push back against such legislation,  however they can.

“The battle will not end until man’s heart changes,” Lee said. In the meantime, unborn babies are still dying, and parents are feeling the emotional pain of past abortions – even in many churches.

Lee said that one-in-four women in the nation have received an abortion, according to some statistics. “If that is true,” she said, “how many of those women and men … sit in our pews, silent and unhealed?”

Evangelical churches, especially, need to become more active in advocating for the life of the unborn and for the healing of hurting parents, she added. They can join pro-life groups praying on the sidewalks across from abortion centers. They can volunteer to help at pregnancy health centers or to mentor a young mother or father.

“Battles are not won sitting at home,” she said. “The church needs to have feet on the ground.”

Faber agreed. “We should support pregnancy help centers throughout our state. We cannot just say we are pro-life. We need to show our faith by our works,” he said.

“We need to also work with our legislators and others to make adoption easier and more affordable,” he added. “If we truly believe that the child deserves a right to life, we need to do what we can to give them a decent start at life. Our Missouri Baptist Children’s Home helps hundreds of children and families every year, but there are so many more who could be helped if our laws and regulations were more favorable to adoption.”

Faber also encouraged Missouri Baptists to always pray and to vote for leaders who value the sanctity of life. More specifically, he added, “We should advocate for the passage of a personhood amendment to our state Constitution that recognizes the unborn children as fully human persons deserving of the right to life as all other individuals.”