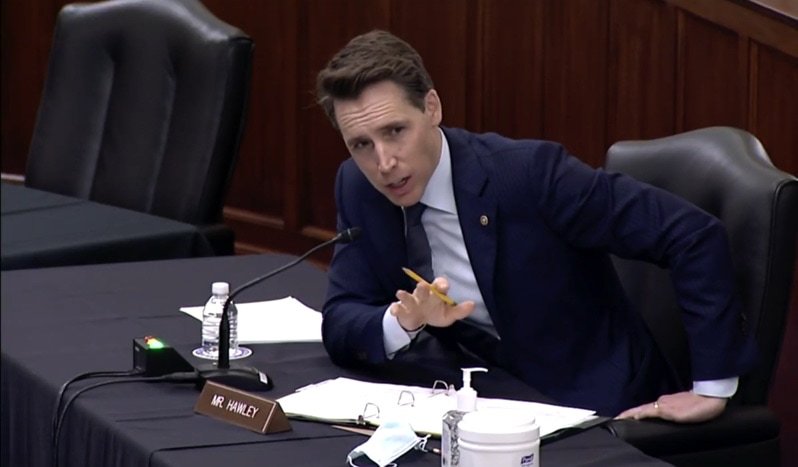 Sen. Josh Hawley, R-Mo., has called for a federal civil rights investigation of states that have continued during the coronavirus (COVID-19) pandemic to place strict limitations on religious gatherings while permitting massive protests of the police killing of George Floyd. Screen capture from hawley.senate.gov

WASHINGTON (BP) — A United States senator has called for a federal civil rights investigation of states that have continued during the coronavirus (COVID-19) pandemic to place strict limitations on religious gatherings while permitting massive protests of the police killing of George Floyd.

The viral video of Floyd’s death while pinned under the knee of Minneapolis officer Derek Chauvin prompted protests by thousands of Americans in some large cities and hundreds in some smaller ones, often without the precautions called for by public officials to prevent the spread of COVID-19. At the same time, authorities in some states and cities maintained stringent caps on worship attendance for churches and other religious groups.

“Churches need to be treated the same as similar kinds of activities, where they are actually similar,” said Wussow, vice president for public policy of the Ethics & Religious Liberty Commission, in written remarks. “Church leaders can be trusted to keep their congregations safe and love their neighbors.

“At the same time, when civic leaders offer counsel rather than directives, they are far less likely to overstep the constitutional bounds of the First Amendment.”

“Churches have done extremely well in following the desired safety restrictions throughout this pandemic but are more than ready to see those restrictions eased so gathered worship can resume. The worship of God has always been a first liberty in America.

“I would appeal to all local and state authorities to treat churches equitably so they can reopen as soon and as safely as possible. Religious liberty has always been the highest commodity in American life, and it needs to continue to be so both now and in the future.”

In the wake of Floyd’s death, Southern Baptist leaders have spoken out for justice while urging government officials to treat religious groups with equity. On May 30, all SBC officers, entity heads and state convention executive directors signed a statement that grieved Floyd’s death and called for the end of “racial inequity in the distribution of justice in our country.”

In his letter, Hawley said millions of Americans “are rightly angry about the death of George Floyd, and they should be able to protest peacefully. At the same time, state officials must not use their support for this protest to infringe the free exercise and free speech rights of religious Americans. Yet that is happening across the nation.”

Southern Baptist leaders commended guidelines issued May 22 by the Centers for Disease Control and Prevention (CDC) for restoring in-person worship gatherings. The guidance reminded state and local officials to take the First Amendment right of religious liberty into account when they institute re-opening policies. No church or other religious group should be called on to enact “mitigation strategies” stricter than those requested of “similarly situated entities or activities,” according to the CDC.

In a May 19 letter, U.S. Assistant Attorney General Eric Dreiband told California Gov. Gavin Newsom regarding his state’s policies, “Simply put, there is no pandemic exception to the U.S. Constitution and its Bill of Rights. Religious gatherings may not be singled out for unequal treatment compared to other nonreligious gatherings that have the same effect on the government’s public health interest, absent the most compelling reasons.”

Newsom had issued an executive order permitting businesses such as retail stores and restaurants to open with social distancing during Phase 2 of reopening the state, but he had postponed worship services until Phase 3. On May 25, the state issued new guidelines that permitted churches and other religious groups to meet at 25 percent of building capacity.

In Nevada, a federal judge refused Tuesday (June 9) to halt the state’s ban on worship gatherings of more than 50 people even though evidence was provided that social distancing was not being practiced at reopened casinos or protests against Floyd’s killing, The Associated Press reported. Two churches in the state had asked for temporary injunctions to nullify the 50-person limit.

The overwhelming majority of churches and other religious bodies have abided by government policies during the pandemic. This has resulted in such alternatives to in-person, corporate worship as online and drive-in services. Many Southern Baptist and other churches have resumed in-person worship in recent weeks while following government guidelines.

As of 11:30 a.m. CDT Thursday (June 11), more than 113,000 deaths from COVID-19 and two million confirmed cases have been reported in the United States, according to Johns Hopkins University.