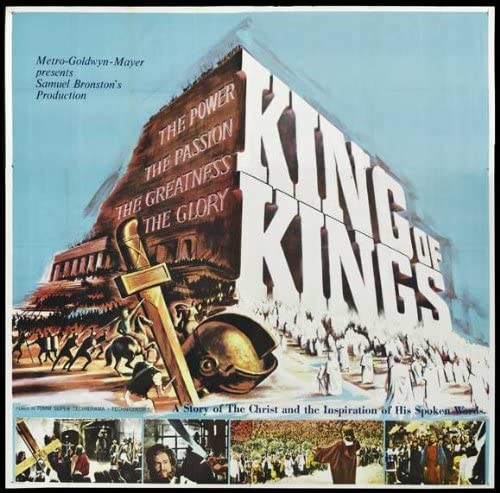 Here we have an interesting selection for our classic biblical movie club: 1961’s “King of Kings.” Perhaps more than the other entries on our list so far, it’s a movie of highs and lows. The highs as told by director Nicholas Ray are marvelous, but wow, those lows are hard to watch.

As you might expect, King of Kings spans the life of Jesus, from just before His birth to the moments after His resurrection. And yet while Ray tried to inject drama into His life, the end result seems less about the actual King of Kings than the political intrigue and power struggles of the Roman and Jewish leaders of the day. Jesus – as played by Jeffrey Hunter – is the nominal star of the movie, and yet he often feels like supporting player to His own story. This is a dramatic story, not a theological one.

Critics at the time weren’t thrilled. Time called it “[i]ncontestably the corniest, phoniest, ickiest and most monstrously vulgar of all the big Bible stories Hollywood has told in the last decade.” I can testify that it’s fun to be snarky and mean in a movie review, so Time is exaggerating a little. And yet they aren’t entirely wrong. John the Baptist (Robert Ryan) in particular has some very cringeworthy dialog performances. Siobhán McKenna, who plays Mary, is a fine actress, but she was 39 years old during production; she’s a distractingly odd choice to see as a pregnant teenager riding into Bethlehem on a donkey. Still, audiences have warmed over time. It has an 85 percent rating on RottenTomatoes.com.

We’ve talked before about how even though Scripture is profitable for teaching, for rebuking, for correcting and for training in righteousness, it may not lend itself to an imminently watchable movie. With that in mind, telling a biblical story based on the point of view of secondary or even tertiary characters is a decent idea. For one, it lets the filmmaker flex his creativity while leaving certain fundamental elements of the story faithful to the Scripture. Seeing the extended interplay between Pilate and the high priests or Barabbas plotting a rebellion is indeed interesting, but it feels out of place in a narrative ostensibly about the King of Kings.

Still, Ray makes some very odd choices to alter the biblical account. Jesus’s baptism left me very confused. I can’t find any record of Ray’s faith, but judging from some of the scenes with Mary, it seems he had Catholic influences. On the other hand, the Sermon on the Mount is left largely intact and is read word for word, presenting a fuller picture of what that moment may have been like.

With a critical eye, yes. Production value is very high and the excellent soundtrack redeems – pardon the phrase – what otherwise might be a pass. Some of Ray’s visuals are extremely striking, such as the temple, the healing of the blind man and Christ’s reappearance to the disciples. Orson Welles narrates the picture, and his voice is always a welcome addition.

Herodias’s daughter’s dancing to earn the head of John the Baptist is… well, it’s creepy. It’s presented negatively, but just be aware.