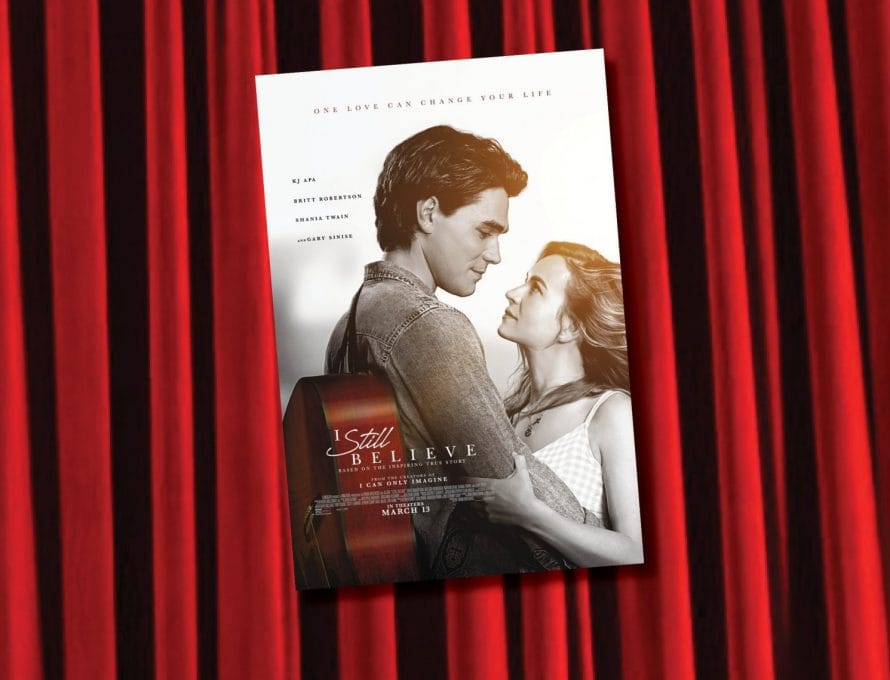 If you’re in a rush, you can just read these first three sentences. If you enjoyed “I can only Imagine,” you’ll enjoy “I Still Believe.” I happen to think both are very well-done and represent important steps forward in “Christian” movie making.

Both are true stories based on Christian musical acts’ origin stories, both are love stories and it’s not a spoiler to say both are wrapped up in great loss and sadness yet end in triumphant victory. They’re both also very, very well done.

I Still Believe tells the story of Christian recording artist Jeremy Camp. In real life and in the movie, Camp begins his musical career and meets his soon-to-be wife, Melissa. Though theirs is a Christ-centered, God-honoring relationship, their marriage is cut short by… well, I suppose going into that much detail would be a spoiler. I knew the basic plot points going in, and I still didn’t know exactly where the movie would take me or how it would take me there.

K.J. Apa, who plays camp does a fine, job, but the star is Britt Robertson’s Melissa. She makes the most of every second she’s on screen, and it’s easy to see how Camp falls in love with her. It seems like every Christian movie needs a surprise A-lister in the cast. For “I Can Only Imagine,” it was Cloris Leachman and Dennis Quaid. For “I Still Believe,” it’s Gary Sinise and Shania Twain as Jeremy’s parents. They and the rest of the cast are good, and with no obvious weak links.

Again, like I Can Only Imagine, the strength of the story comes from knowing it’s based on true events. What would seem cheap melodrama if concocted out of thin air by screenwriters, takes on new weight when it’s a real-life drama penned by the all-knowing Creator, whose ways are not our ways, and even the “happy” endings are not always what we would choose.

I hope you and I never have to face some of the trials depicted in I Still Believe, but I hope you and your family can find one of those connection points and see it. Christian movies as an art form have made tremendous strides in the past couple of years; this represents another step forward. The acting is excellent, the music is excellent and the characters’ faith is integrated into the script better than any other movie I can remember. If you want these movies to continue and grow, you need to vote with your wallet.

Kevin Downes, one of the movie’s producers, candidly told me that while they’re primarily concerned with telling God-honoring stories, audience reception is key toward more movies like I Still Believe making it to theaters.

“Filmmaking is not easy,” he said. “It’s more than just getting out there with a camera and a script. We’re making tremendous strides with our storytelling, production value and actors. We’re taking excuses away. We’ve come a long way to be able to deliver that, but it can go away in a flash if people don’t support the films.”

I Still Believe opens March 13, and is rated PG.