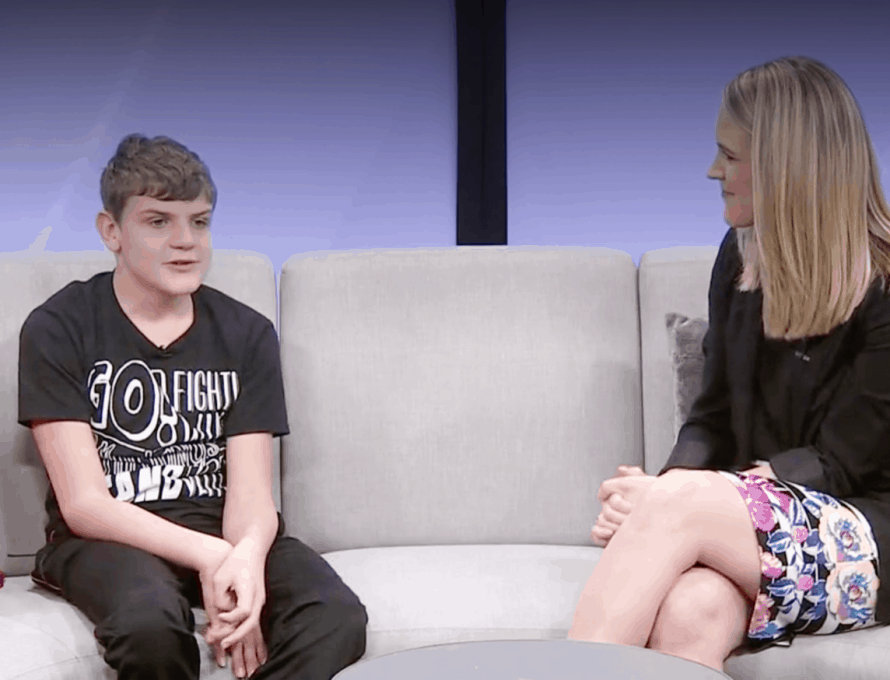 Kevin is one of more than 13,000 children in Missouri’s foster care system. Kevin has been waiting since he was six. That was ten years ago. Back in December, Kevin was featured on KOLR Channel 10 in Springfield on their weekly feature on foster kids like Kevin in search of a home and forever family.

After footage rolled of him working behind the scenes at school theatrical productions, Kevin took a whirl at the weather man’s green screen, then looked at the anchor interviewing him about what kind of family he might want and asked a question: “Can I say something?”

“Of course,” she said, as Kevin turned to face the camera.

“I want a Christian family,” the high school sophomore said. Just get ahold of Ms. Krystal and tell her that you want to adopt me, and she’ll try to get it figured out.”

“Ms. Krystal” is Krystal Neal, his caseworker. But Neal is more than just his caseworker. She’s an employee of the Missouri Baptist Children’s Home Children and Family Ministries, which in turn handles Kevin’s case through a contract with the state. Because of MBCH’s mission to serve God by responding to the needs of children, youth and families, thousands of foster kids like Kevin have been served not just by the Department of Social Services, but by caseworkers and foster families that know a God-centered family is the one that works best.

During 2019, MBCH facilitated 187 children finding permanent homes (76 reunified with family, 24 through guardianships, and 87 through adoption). More than a thousand families were part of the MBCH extended family through the foster care, crisis pregnancy services, and human trafficking rescue ministries. Each person touched by MBCH heard the gospel.

Kevin’s story caused nearly every eye to tear up during the Jan. 28 MBCH trustee meeting here. But even as they prayed for a family for Kevin and praised God for the Christian influence that has clearly taken place, they contemplated a time when state regulations may not make it so simple.

Trustees began to look at developing a five-year strategic plan for MBCH and its affiliates to be finalized by the end of the year. This is part of the normal planning process, but potential threats from those who feel Christian values and mission do not have a place in the public sphere means this strategic plan is coming at a crucial time.

For example, MBCH and its subsidiary ministries receive funding through the Cooperative Program, the Missouri Missions Offering, as well as gifts and donations from individuals. While these are vital sources to funding ministries to children and families in need, the bulk of funding comes from bidding on contracts through the state’s Department of Social Services. Should a day come when the state or federal overseers object to MBCH enforcing its statement of faith on its employees and integrating it into its services, they must develop a plan to continue serving with dramatically reduced revenue streams.

Critics of serving the Lord through ministries that have a tie to state funds – such as foster care through MBCH’s Children and Family Ministries – argue that Christians wrongfully discriminate and turn away otherwise qualified prospective parents based on sexual orientation, gender identity, and religion.

It’s a day MBCH hopes and prays never arrives, but it’s not that farfetched. In Kentucky, Sunrise Children’s Services, a Southern Baptist Foster Home, has been embroiled in a legal battle after the American Civil Liberty Union brought suit against them in 2000. Like MBCH, Sunrise provides foster care, therapeutic treatment, residential care and community-based services and does so with state contracts. A federal judge dismissed the suit in May of 2018, but the case is still looming, with the ACLU claiming that Sunrise forces religion on children and does so with state funds.

On the federal level, MBCH and many of its  sister organizations opposed the Every Children Deserves a Family Act introduced in Congress this past summer. If passed, it would bar discrimination based on sexual orientation, gender identity, and religion.

Thankfully, MBCH leaders don’t see the bill getting much traction, but elections this fall could change that.

“If these laws become effective and begin to affect us as an agency how will we do services?” said Ron Robinson, chairman of the MBCH board and pastor of First Baptist, Van Buren. “If we no longer get contracts from the state because we’ve discriminated on sexual orientation and religious beliefs, how will we serve these kids? We want to be proactive and not to get caught where we have to make a sudden decision. We are beginning to walk through that and we’re beginning to say, this is the red line; this is what we can’t cross over. This is how we’re going to do ministry, this is how we’re going to provide services and so on and so forth.”

Russell Martin, MBCH’s president, said the tension between standing firm on Christian convictions and the cries of discrimination is a topic discussed among the leaders of Baptist children’s ministries such as MBCH and Sunrise and agreed that they all desire to be proactive, not reactive to any potential threats.

“God has a plan for MBCH,” he said. “We’re not where we were 134 years ago, when the Baptist Orphan’s Home opened its doors. I will have been here 43 years in June and we’re not the same as we were then; things have changed. Even in the last five years, things have changed. In the next five years, things are going to change. God has a plan and we want to be sensitive to His will, and seek His face and direction. It may be that we will be sitting in this meeting five years from now and nothing will have changed. I think things will change, and hopefully there will be good changes.”