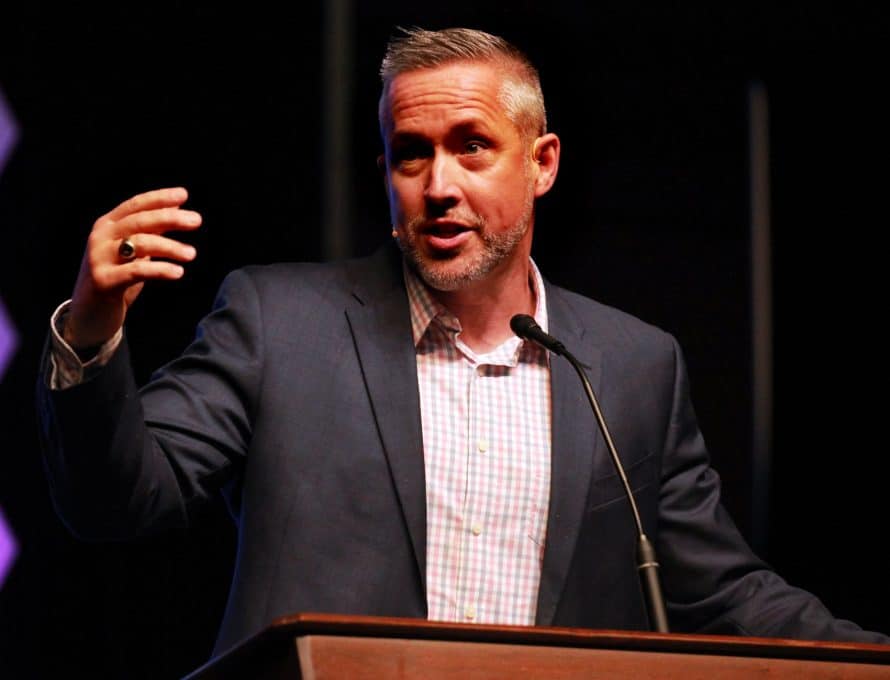 BRANSON – J.D. Greear, pastor of The Summit Church in Durham, North Carolina, and president of the Southern Baptist Convention, spoke to Missouri Baptists, Oct. 29, at their annual meeting here. He preached from John 14, calling for Missouri Baptists to be less concerned with growing large churches, and instead multiplying those churches, even at the cost of the “best” and most reliable church members.

“Jesus’s way of reaching the world would not come from one seed growing larger and larger,” Greear said. “It would come through that seed dying, being broken open and scattered. Whenever Jesus talked about the greatness or the effectiveness of the church or the completion of the Great Commission, He always focused on leaders being raised up and sent out. Not audiences being gathered in and counted.”

Greear read John 14:12, which says “Truly I tell you, the one who believes in me will also do the works that I do. And he will do even greater works than these, because I am going to the Father.”

“How we have built our churches turns this principle on its head because we celebrate churches and pastors with great anointing who gathered great audiences around themselves,” he said. “But the ‘greater works’ that Jesus spoke of are realized only when ordinary believers are raised up and sent out. It’s the principle of the harvest; God only multiplies what we sow.”

Greear said there are several obstacles the church places in its own path. One is selfish desire and wanting to be comfortable, and the other is fear.

“What keeps the farmer from sowing is because when you plant that seed, you can no longer use it,” Greear said. “We’re afraid of giving away what we need. There is a risk in planting, but it is a risk that God has commanded us to take it. He only multiplies what is sown, and He only blesses what is given away.”

“The Christian community has bought into a dangerous, dangerous myth about calling,” he said. “There’s this idea of a calling as a sacred, mystical experience that is reserved for a select few of us in the body of Christ. I call it the Cheerios method of discerning the will of God, where you stare into your cereal and expect your Cheerios to spell out what you want God to do.

“In Matthew 4:19 Jesus said, ‘Follow me and I will make you a fisher of men,’ which means when you accepted the call to follow Jesus, you also accepted the call to leverage your life for the Great Commission. Whatever God made you good at, you should do it well for the glory of God and do it somewhere strategic for the mission of God.”