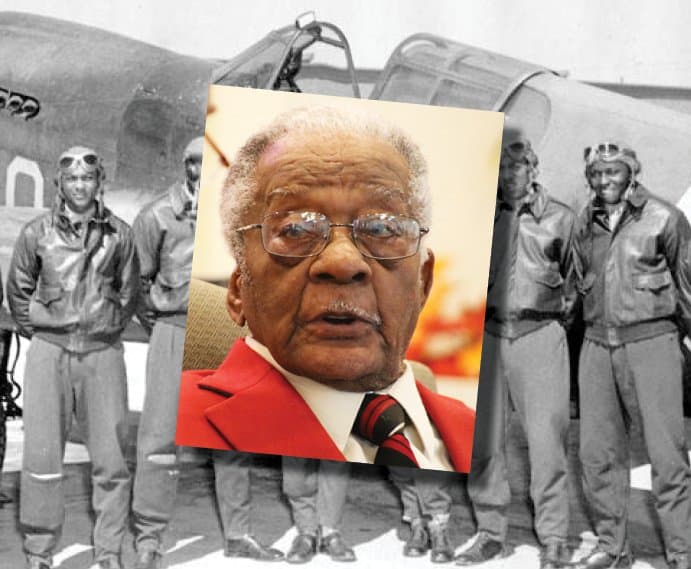 HOLTS SUMMIT – The Cedar Grove Baptist Church here celebrated Veteran’s Day, Nov. 11, with not only one, but two, World War II veterans in attendance. They welcomed, as a special guest, Tipton native James Shipley, who served as a mechanic with the famous Tuskegee Airmen during the war.

Shipley joined the Air Force in 1942 at the age of 19, spending two years, 11 months and 29 days in service during World War II.

“We flew over 200 missions and never lost a bomber,” Shipley said. Such a feat didn’t come easily. Not only were pilots in danger of enemy attack while on mission, but on one day 35 planes were damaged when their airfield was bombed. Also, Shipley had to ensure that the aircraft he maintained hadn’t been sabotaged. Despite the dangers, his pilots survived the war.

“They all came home,” he said. “No early returns.”

Because of the color of their skin, the Tuskegee Airmen were often discriminated against and had to struggle for their achievements during World War II. Shipley shared how his commanding officer, General Benjamin O. Davis, Jr. (1912-2002), was treated during his training at the U.S. Military Academy at West Point, N.Y.: Davis had no roommate; he ate alone; and his classmates refused to speak to him outside the line of duty. But this treatment hardened Davis’ determination. “He stayed and graduated,” Shipley said.

After the war, Shipley returned home to Tipton, where he later met his wife Mildred, who is 10 years his junior. The couple has been married for 69 years. Longtime members of Prairie Grove Baptist Church, they spent many years serving at the Concord Baptist Association’s summer camp for children.

In marriage, as in all things, they told Cedar Grove church members that faith has been central in their lives.

“We’ve been highly blessed of God,” Shipley said. Speaking of the importance of prayer, his wife added, “It’s about Him. It’s not about us. We’re here to glorify Him.”

Clarence Richards, another World War II veteran and a member at Cedar Grove Baptist Church, told The Pathway that it was a blessing to hear from Shipley and his wife. During the war, Richards served with the U.S. Navy for four years, stationed on the U.S.S. Tryon in the South Pacific.