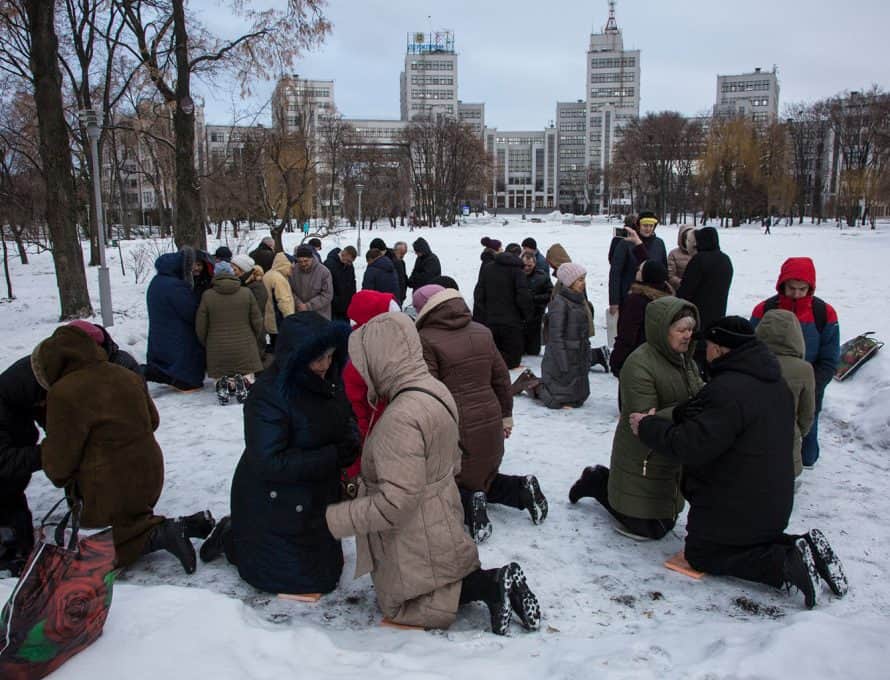 KHARKOV, Ukraine – It was still dark outside as I rose to go to prayer. A chill in the room told me that it was going to be a frigid mile-walk to the square. I wanted to crawl back under the covers, but resisted. “I’ve been doing this for only three days while my Ukrainian friends have done it every day for five years,” I rebuked myself.

Leaving the hotel, I picked my way around frozen piles of ice and deep muddy puddles, bent my head away from the wind, wrapped my scarf a little tighter, and walked in the early morning light to Freedom Square in Kharkov. It was only 26 degrees with fresh snow falling and a bitter wind beating at my face, but I arrived to find big smiles, hearty handshakes, and warm cheek-kisses from a jovial group who seemed not to notice the cold at all. The contagious joy warmed me from inside out and made me glad I’d come.

But every day? For five years? I don’t know if I could do it. What compels these people to get up early and kneel in the snow? Why is it so important to meet together when they could whisper a prayer from the warmth of their beds?

In March of 2014 tanks and guns and men with masks appeared on the streets of Kharkov, Ukraine, throwing everything into upheaval and threatening the twenty-three-year religious freedom that had nurtured this post-Communist generation. Nearby cities of Lugansk and Donetsk were also under attack by separatists, but those battling in Kharkov didn’t know what they were up against.

Pastors and evangelical leaders put out a call for prayer—seven o’clock every morning, in the city square, for anyone who wanted to fight the real battle taking place for their city—the spiritual battle. Within a week, 150 to 200 believers showed up to fight on their knees because they remembered the spiritual darkness that shadowed their land under Communism. This wasn’t a political battle, it was and is a spiritual battle of epic proportion as their freedom to worship, meet together as churches, pray publicly, and share their faith with others was all being threatened.

“This is the generation of the children whose fathers were killed for their faith, whose fathers spent most of their time in prison for their faith. We knew the real face of Communism, and it was trying to come back. We were standing on our knees, and we said, ‘Lord, we don’t know what to do. Our eyes are on you, Lord.’ The only hope was on the Lord,” said Pastor V, a Baptist pastor and one of the leading organizers of the prayer meeting.

During the 72-year Communist rule, evangelical churches and activities were outlawed. Ukrainians who preached, taught from Scripture, or shared the gospel were forced underground and severely persecuted. Two generations of children grew up being taught in school that there was no God. After WWII, conditions were especially dangerous. Baptists and other Protestant believers in the USSR were compulsively sent to mental hospitals, were forced to endure trials and imprisonment, and were even deprived of their parental right in some cases.

After years of praying and paying dearly for their faith, God brought religious freedom to the country. Since that time Ukraine has become the Bible Belt of Eastern Europe. It is the hub of evangelical life throughout the former Soviet Union, leading the way in new churches and sending missionaries.

In contrast, the still-occupied territory in Eastern Ukraine is presently seeing the same attitude toward evangelicals that they remember all too well from their childhood. In the wake of the 2014 takeover by separatists, evangelical churches have been closed and threatened with fines in the main cities in the occupied territory.

Now, when these brothers and sisters gather, they pray for those in the war zone and for long-lasting peace, knowing that it will only come if God’s spirit moves to bring people to repentance and faith in Jesus.

This is why Ukrainians pray every day, on their knees, regardless of the weather.

Joe Ragan and Linda Gray, who serve in Kharkov as IMB missionaries, lived through the scariest times of the invasion. Joe had to flee his home in the war zone in 2014, leaving all his earthly possessions behind. Linda was in Kharkov, then and now, and remembers almost fleeing the city in fear during those days. God used this prayer group—their fellowship and faithfulness—to keep Linda grounded.

“In some ways I was in awe of my Ukrainian brothers and sisters and their passion for prayer, only watching from afar. But after a short time, I found myself kneeling alongside my friends. I always rose up from the time of prayer with a sense of knowing I was still exactly where I was meant to be,” she said.

Hebrews 11 is a roll call of those who came before us, an encouragement to learn from those who exemplified faith. Though the Ukrainians on the square are not figures of the past, they are present day examples of faith in a world not so different from our own. As Joe and Linda can testify, they have a lot to teach us. As conflict rises and anti-Christian rhetoric begins to influence the culture where we live, might we be wise to follow the example of our Ukrainian brothers and sisters? What might we learn from these faithful prayers?

When the events of March 2014 took place, the Ukrainian church felt it was a wakeup call and was strongly convicted that they had not been already praying for their country and their leaders (1 Tim. 2:1-3). In the 23-year period after Communism, enthusiasm had waned, and the church had quickly become complacent.

“When we started praying at the square, I had to repent, because I hadn’t been praying for our president or our government. Because we didn’t like them, we didn’t pray, even though we are Christians and the Bible tells us to pray,” said Nadia, my translator and a pastor’s wife in Kharkov. Now they pray every day for those in power over them, whether they like them or not.

Even though the immediate threat of violence has passed in Kharkov, the dedicated group (about 20 people now) continues to meet and pray faithfully. Through the events that took place five years ago, their eyes were opened to the threat of danger and the privilege of peace. They prayed frantically for safety from immediate danger. Now when they gather, they pray not only for God’s blessings, but for revival in their churches and on their streets so that God’s name can be known to all Ukrainians.

3. Pray even in the midst of social or political pressure to stop.

When the prayer group began in 2014, they were threatened by soldiers and violence as well as policemen who said they had to disperse or face jail. “In the first days when we began to pray in the square, we were afraid because we knew that we might be beaten,” said Nina, an Orthodox believer who has been a faithful prayer since the beginning.

The fears weren’t imagined. In Donetsk, where the battle also raged, a prayer tent was set up, and the leader was beaten and hospitalized. He later died.

“We have to stand on our knees and overcome our fears,” said Ivan, an 80-year-old man who arises at 5:30 every morning to travel to the square and pray. “You must understand that when you kneel in prayer, big things happen. God gave us power to overcome fear.”

4. Join with other denominations to seek God together.

Two of the founding members of this prayer group were an Orthodox priest and Pastor V, a Baptist. The fear of war brought believers of all denominations together in a new and unique way. Pastor V said that these “prayer friends” made their Christian world wider and helped them see what God is doing. No one ever asks a new prayer what church they belong to. All are welcomed. “The church gathered, and Christians came out together,” said Nina. “On the square, the church became one.”

5. Know that the sweet fellowship of prayer is worth the effort.

Despite long travel routes and bad weather, the ones who come together each day now depend on the encouragement and fellowship of communal prayer. The big smiles and hugs and laughter among the group make it obvious that the joy is greater than the inconvenience. Pastor V says the practice has become a welcomed routine and a great start to the day and makes them stronger in their spirit.

“Whatever the weather is, after prayer and fellowship with brothers and sisters, moreover, with God almighty, I just fly back home on the wings of faith,” Ivan said.

As I rise from my kneeling position, my toes are a little numb and, well, honestly, I’m freezing. But it doesn’t really matter because my heart is warm and full of gratitude for the witness of these people.

I live in Prague, Czech Republic, the atheist capital of Europe. There is a group that meets every morning in the center and prays. I’ve never been because I’m not a “morning person,” a reason that seemed legitimate until now. Today, I decide, I will join the group of prayers in Prague one day soon, and as we pray for our city, I will also be praying for Kharkov and thanking God for the fellowship of standing on our knees together. Will you pray for your city?

EDITOR’S NOTE: This article is by Nicole Leigh, a writer with IMB, living in Central Europe. She has joined others in her city for prayer after being inspired with the faithfulness and fortitude of Ukrainian Christians.