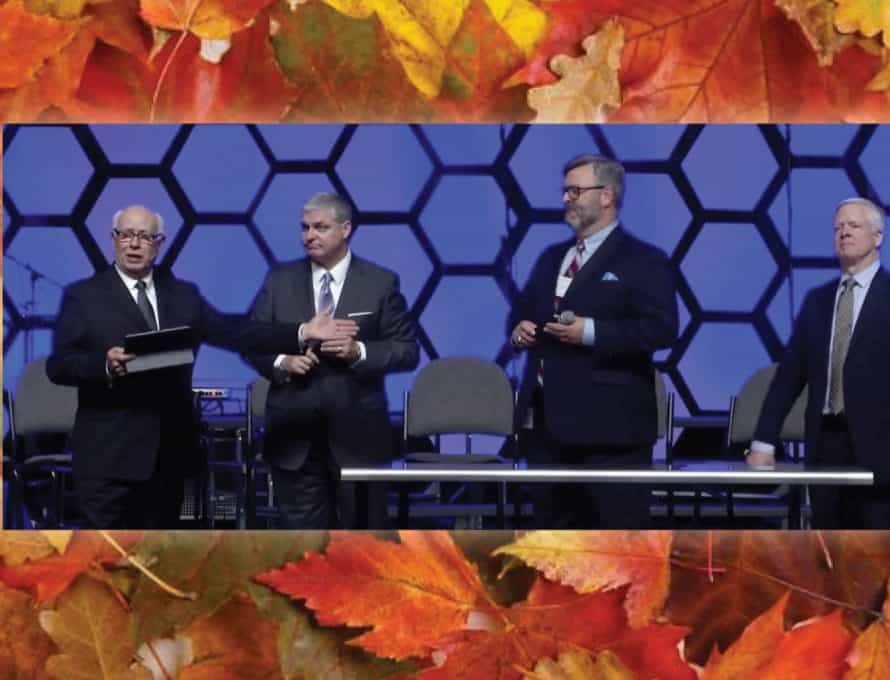 BRANSON – Missouri Baptists gathered during their annual meeting at the Branson Convention Center here to celebrate restoration and renewed cooperation for transforming lives and communities with the gospel.

Attendance for the Oct. 28-29 meeting rose considerably in comparison to the previous few years, drawing 1,277 messengers and 262 visitors from 499 churches.

‘We have come to celebrate restoration’

The Foundation, the Home and MBU were among five Missouri Baptist Convention (MBC) entities – including also the Windermere Baptist Conference Center – that broke away from the MBC in 2000-2001. After months of seeking private reconciliation and even binding Christian arbitration, Missouri Baptists directed the MBC to seek a legal remedy as a last resort.

This led to protracted litigation, which finally ended this February, when the Home and MBU decided not to appeal a ruling by the Missouri Court of Appeals returning both institutions to MBC control. The Foundation was welcomed back into the MBC family in 2016.

“We have come to celebrate restoration,” MBC Executive Director John Yeats told messengers during his annual address. During his address, he welcomed to the stage and briefly interviewed the presidents of each MBC entity, as well as the MBC’s ministry leaders.

“We truly are better together, believing with all our hearts that the cooperative message is a biblical message for today,” Yeats told messengers. “When we say we believe the message of cooperation, it is not mere intellectual assent. It means we practice it, we teach it, and we glorify our Lord through it.”

Prior to his address, Yeats also recognized Randy Comer, chairman for the MBC’s Agency Restoration group, which has overseen the MBC’s efforts during the past two decades to win back its entities.

“Tonight, we would like to share this plaque with you – that is, a plaque with a resolution from the executive board, declaring that your task is finished,” Yeats said. “And we thank God for everyone coming home! Let’s stand and give praise to the Lord!”

During his address, MBC President Jeremy Muniz also signaled a step toward reconciliation with the Windermere Baptist Conference Center. The MBC’s efforts to restore Windermere ended unsuccessfully in 2014, when the Missouri Supreme Court denied the MBC’s bid for a jury trial to determine the legal ownership of the conference center.

Muniz preached from Colossians 1:15-23, which inspired the theme for the annual meeting, “Christ is all.” According to this passage, he said, Christ is the author of creation, the genesis of resurrection and recreation, and the agent of reconciliation.

“The agent of making peace is the blood of Christ. We need to plead the blood of Jesus,” Muniz said, urging messengers to seek reconciliation and peace with God and others. To exemplify the power of reconciliation, he welcomed on stage Windermere President Tim Huddleston.

“I have been praying for this day, daily, for months,” said Huddleston, who began his tenure at Windermere, March 1. He told Missouri Baptists that he accepted this position at Windermere “on one condition: that we would fully reconcile with the Missouri Baptist Convention.”

Earlier this year, Huddleston sent a letter to the MBC Executive Board, asking for forgiveness on behalf of Windermere. In response, the board authorized Muniz in its August meeting to appoint “a task force for the purpose of initiating conversations with” Windermere’s administration and trustees. Members of the task force include Muniz and Executive Board members Ron Boyer and Richard Rogers, alongside MBC Collegiate Ministries Director Gene Austin and Missouri Baptist Foundation President Neil Franks.

“In the days and months to come, we’re going to see more and more opportunities to partner with this dear brother and Windermere,” Muniz told Missouri Baptist messengers. “This issue of Windermere has been one of those things that has broken our hearts for so long and that the world has used to point a finger at us, but here we have a beautiful illustration of how Christ is all, and how we are applying the biblical principle of reconciliation.”

Also at the recommendation of the Executive Board, messengers approved the amended Articles of Incorporation and received the amended bylaws for Hannibal-LaGrange University, Missouri Baptist University, and the Baptist Home and Baptist Home Foundation. These approved amendments brought the governing documents for these entities into line with the MBC’s revised governing documents, which messengers approved during their annual meeting in 2017.

During the annual meeting, messengers and guests heard from various speakers from around the nation, including Johnny Hunt, senior vice president of evangelism and leadership at the North American Mission Board; Carlos Smith, lead pastor of The Journey Hanley Road in University City, Mo.; and Southern Baptist Convention President J.D. Greear, pastor of The Summit Church in Raleigh-Durham, N.C.

After the meeting, on the evening of Oct. 29, Missouri Baptists also enjoyed a concert with the preeminent modern hymn writers Keith and Kristyn Getty. During the concert, they welcomed Missouri Governor Mike Parson and the first lady, Teresa, members of First Baptist Church, Bolivar, Mo., as a special guest.

The MBC’s 2020 annual meeting is scheduled for Oct. 26-27 at the St. Charles Convention Center and Hotel in St. Charles, Mo.