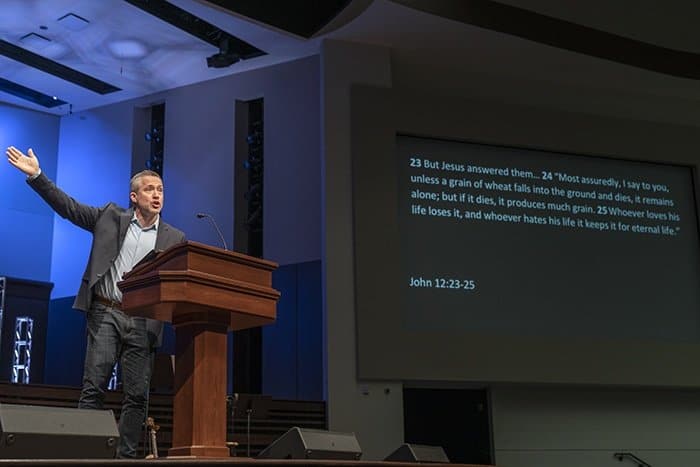 The challenging work of missions is the core directive of the Great Commission and the mandate of “ordinary believers” to reach beyond their comfort zone to serve God, Southern Baptist Convention President J.D. Greear told the Southwestern Baptist Theological Seminary community during chapel services, Oct. 17.

“Those who believe must be sent,” he said.

Preaching from John 12:20-25, Greear called upon churches to raise up ordinary people and send them out to do mission work and plant churches, even when it may strain those churches to lose faithful members in the effort. “A call to be fishers of men is a call to missions,” Greear said. “There is nothing more exciting you can be involved in than church planting.”

At The Summit Church in Durham, North Carolina, where Greear is pastor, sending out their best has yielded exciting results, he said. There are 120,000 students living in the vicinity of The Summit Church. “We have a lot of potential missionaries. For every one person we have sent out from our church, there are now 30 people worshiping,” he said.

“Our church has taken on the responsibility of planting a thousand churches within our generation. We teach all of our students that by the time they graduate or turn 30, they need to plan on spending two years on one of these church plants. Give us your first two years and we will change the world.”

This corresponds to one of Baptists’ core convictions, he said — “that every single believer is called. The calling to leverage your life for the Great Commission was included in the call to follow Jesus. Matthew 4:19 said, ‘Follow me and I will make you a fisher of men.’ When you accepted Jesus, you also accepted the call to missions. Everybody is called. The question is not if you are called, but where and how.”

“Leverage your career,” Greear continued. “Whatever God made you good at, you should do that well, to the glory of God, but you should also do that for the mission of God. You should do it someplace where you strategically can be used.”

The words of John 12:20-23 changed his ministry and life, Greear said: “Since Abraham, God has promised that he was going to send salvation to all the nations. Now you’ve got the Greeks, the Gentiles, these other nations, and they’re actually coming to Jesus. This is a pivotal moment in salvation history. Jesus tells His disciples that unless a grain of wheat falls into the ground and dies, it remains alone. If it dies, it produces much grain.

“Through that death, new life comes forth. It’s called the principle of harvest. True growth comes only through scattering.”

The need for sending out Christians is growing, Greear believes. He encouraged Christians to expand their view of what ministry should be.

“We celebrate churches and pastors that draw great audiences around themselves, but the greater works that Jesus spoke of are realized when ordinary believers are raised up and sent out.”