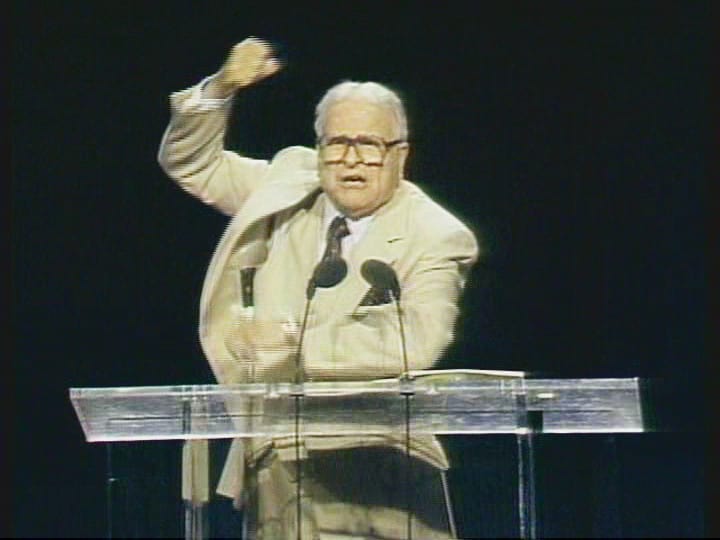 DALLAS – W.A. Criswell’s famous 1985 Pastors’ Conference sermon, “Whether We Live or Die,” roused Southern Baptist Conservatives to make every effort possible to save their convention from theological drift. It would later be called one of the most significant sermons of his ministry.

Missouri Pastor Greg Dixon of First Baptist Church, Maysville, admits that as a “16-year-old hayseed from rural Kansas”, he didn’t realize in 1985 the central role the Southern Baptist Pastors’ Conference played in the ongoing struggle to revive the SBC’s commitment to biblical inerrancy. As such, he missed Criswell’s sermon. Nevertheless, he saw its impact.

“I flew into Dallas-Fort Worth Monday afternoon where my friend (a student at Southwestern Baptist Theological Seminary) picked me up and took me on a little tour of the seminary,” Dixon recalled. “That night we watched as the Pastors’ Conference was featured on the nightly local news, with Dr. Criswell’s message receiving the most attention.

“The news anchor then cut to a live remote interview with Dr. Criswell and Cecil Sherman (who was pastor of Broadway Baptist Church, Ft. Worth, and a leader of the moderates) on a split-screen,” he added. “The camera cut immediately from the recording of Dr. Criswell in the throes of emotion on the convention platform to Dr. Criswell live in the studio with a cherubic smile. Dr. Sherman was stone-faced. As they answered questions in turn about the conservative/liberal rift in the SBC, I realized how deep the divisions ran and how important this meeting would become. The convention would be divided as none had previously been.”

Criswell’s famous sermon surveyed the history of theological drift among Baptists since the rise of Charles Darwin’s evolutionary theory in the 19th-century up to his own day. He recounted Spurgeon’s stand against doctrinal downgrade among British Baptists and lamented the tragic fall of former Southern Baptist professor Crawford Toy to liberal theology. If Southern Baptists in 1985 followed Toy’s errant example, he declared, they could be sure their efforts to reach the world for Christ would fail.

“Some say the position taken by Spurgeon (to defend biblical authority) hurt the mission movement,” Criswell said. “My brother, if the higher critical approach to the Scriptures dominates our institutions and our denominations, there will be no missionaries to hurt! They will cease to exist!”

Criswell urged Southern Baptists to join together and uphold the inerrant Word of God for the sake of winning the world to Christ. They must do so, he proclaimed, before it is too late.

“Years ago, I saw a pathetic picture in Life magazine,” Criswell said. “A little boy had been lost in a horizon-to-horizon Kansas wheat field, had wandered away from the house, and had lost his way in the vast sea of standing stalks.  Frantically, the parents had searched for the small child to no avail.  The sympathizing neighbors helped, but without success.  Finally, someone suggested they join hands and comb the fields by sections.  The picture I saw was the sorrowing neighbors with the family standing over the dead body of the little boy, and the cry of the father printed as the caption below: ‘Oh, if only we had joined hands before!’

“United in prayer, preaching, witnessing, working, not around the higher-critical denial of Scripture, but around the infallible Word of God in Christ Jesus, we cannot fail. If we join hands with the blessed Savior, and deliver the message of the inerrant Word of God, God will rise to meet us.”

Though Dixon missed the 1985 Pastors’ Conference, he has since listened to Criswell’s message repeatedly.

“Without a doubt,” he said, “Dr. Criswell’s address was a watershed moment for the direction of the convention. His zeal for the inerrant and infallible word of God, his command of the English language, his historical, biblical, and literary allusions (especially that flourish from William Blake’s “Jerusalem” at the finish), combined to provide one of the most moving, inspirational, and persuasive addresses in recent memory.”

Indeed, shortly after Criswell’s death on Jan. 10, 2002, Baptist Press reported that “Whether We Live or Die” may have been the most important sermon of his ministry. Criswell himself singled out this sermon in a letter to Jerry Sutton, author of The Baptist Reformation, a well-known history of the Conservative Resurgence.

According to Sutton, Criswell said the sermon was his most significant because – in Sutton’s words – it “set forth the two directions and the implications of those directions in the Southern Baptist Convention.”