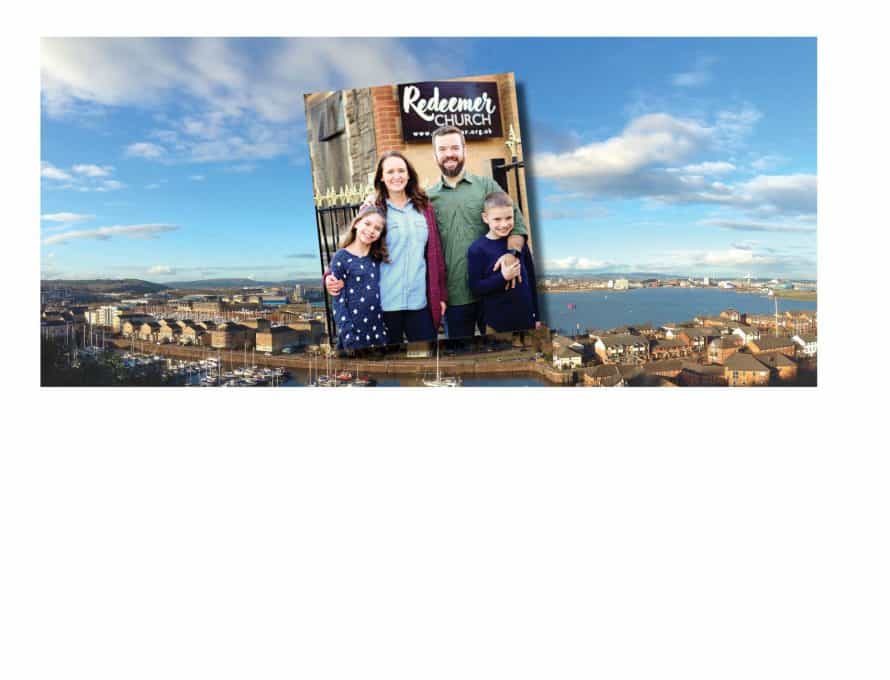 CARDIFF – With roots in Missouri, the Frierson family serves as IMB missionaries here. Pictured here are Dena and Ross, with their children Masha and Timothy. Submitted photo

CARDIFF, Wales – The Welsh capital city of Cardiff, nestled on the country’s southern coast, is the end of the line for many refugees and immigrants who’ve traveled across Europe seeking a better life. Born in Southeast Asia, Tai* arrived in the city several years ago with little hope. He was a victim of human trafficking – a globally rampant, modern-day form of slavery.

But after coming to Cardiff, Tai found hope after meeting a missionary family from Missouri, who serve with the Southern Baptist Convention’s International Mission Board (IMB).

Tai first came into contact with Welsh ministers from Redeemer Church, Cardiff, who were working with a job training program for men and women who escaped human trafficking. Then, through the church, he met IMB missionaries Ross and Dena Frierson.

Like Tai, the Friersons traveled a long way to settle in Cardiff. Born in Arkansas, Ross lived overseas for several years as a child when his parents served with the IMB. Afterward, his family settled in Springfield, where he and Dena met in the youth group at Southgate Baptist Church. A lifelong Missouri Baptist, Dena later went to college at Southwest Baptist University in Bolivar, while Ross attended school at Missouri State University. Then, after attending seminary in Fort Worth, Texas, they eagerly applied to serve with the IMB.

Though Cardiff wasn’t their first destination, they finally arrived in the city – along with their two children, now aged 9 and 12 – in 2017.

It’s not uncommon that the Friersons meet men and women from across the globe who’ve settled in Cardiff. Though it started in a national church planter’s home, Redeemer Church now meets for worship in an old Welsh Baptist chapel in inner-city Cardiff that was built in 1884. From there, the church reaches out to two ethnically diverse neighborhoods.

“You hear all kinds of languages out on the street here,” Ross said, explaining that the government has resettled many asylum-seeking refugees in the area. The church’s website “welcomes” them in 15 languages, and recently there were 17 different ethnic groups represented among 40 people gathered for a Sunday service.

Since they all live in the neighborhood, they often spend time not only at the chapel, but also in each other’s homes. Last month, in the few days before they spoke with The Pathway, they welcomed into their home three young Muslim men, one from Yemen and two from Sudan.

And, of course, the Friersons have also welcomed Tai into their home.

“It was right around Easter time this year, that he was over at our house,” Ross told The Pathway, “and we were in the backyard grilling. Through his broken English and Google translate, we shared that he can be at home and put his faith in Christ. He believed that Jesus was the son of God, had died, had risen from the dead and has forgiven him from his sin.”

The Friersons, along with other church members at Redeemer Church, Cardiff, celebrated with Tai when he was baptized, July 21.

The Friersons asked that Missouri Baptists pray for them as they seek to bring gospel transformation to Cardiff and other regions of Wales. Pray for them:

• as they aim to start four streams of multiplying churches in Wales;

• as they develop national leaders who can make disciples and serve churches;

• as they seek a godly couple who can help in leadership at Redeemer Church, Cardiff;

• as Dena makes disciples by studying Scripture with women in the area;

• and as they bring the hope of the gospel to men and women who come to Cardiff from around the world.

As is the case with all IMB missionaries, the Friersons are able to serve overseas because Missouri Southern Baptists give through the Cooperative Program and the Lottie Moon Christmas Offering for International Missions.

“We want to say thank you,” Ross and Dena said, “for the support they give.”