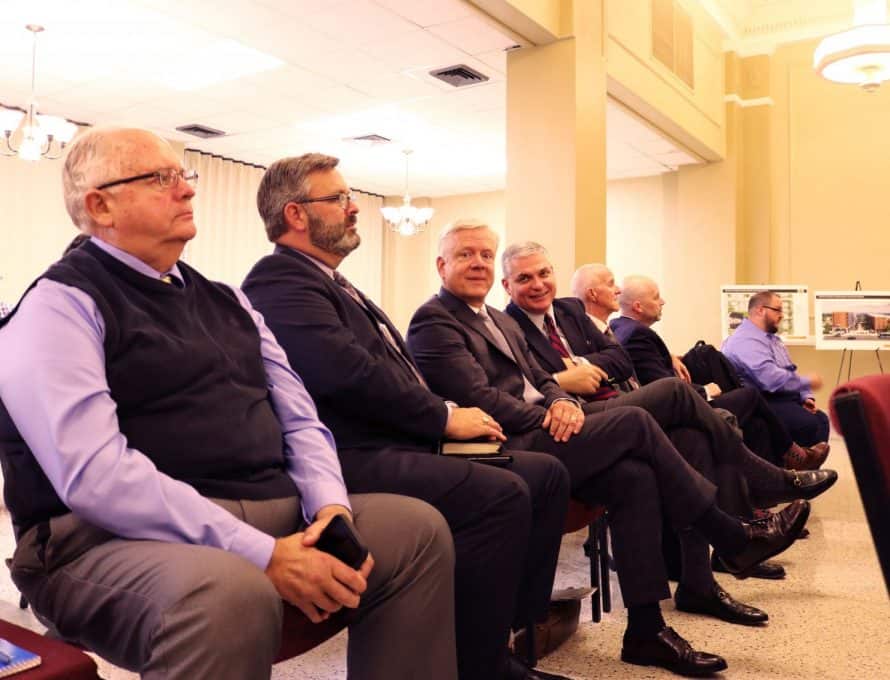 JEFFERSON CITY – The Missouri Baptist Convention’s (MBC) Executive Board approved a 2020 MBC budget of $7,068,280 during their latest meeting here, Aug. 20. In other business, the Executive Board celebrated renewed synergy among the MBC and its entities and also approved the creation of a task force to initiate conversations with the Windermere Baptist Conference Center’s administration and trustees.

The proposed budget for 2020 reflects a slight drop of $2,500 from the approved 2019 budget. During their annual meeting in Branson, Oct. 28-29, MBC messengers will have a chance to give a final vote of approval to the 2020 budget before it goes into effect.

The board meeting was also marked by a moment of celebration, when MBC Executive Director John Yeats welcomed the presidents of the MBC’s six entities to the meeting. As a result of litigation that began in 2001 and ended earlier this year, it was the first time that all of the MBC’s entity leaders had attended the Executive Board meeting together in nearly two decades.

Additionally, the Executive Board unanimously rose in applause after voting to recommend that MBC messengers approve the amended articles and receive the amended bylaws of three of these entities – namely, Hannibal-LaGrange University, Missouri Baptist University, and the Baptist Home. As amended, the documents are compatible with the MBC’s governing documents.

In similar fashion, the Missouri Baptist Foundation and the Missouri Baptist Children’s Home have already updated their own governing documents. Southwest Baptist University has received an extension to present the first draft of its revised articles and bylaws by March 1, 2020.

This decision was in response to a letter of apology from Huddleston. In the letter, Huddleston wrote, “Resolved this day as the representatives of Windermere Baptist Conference Center we seek divine forgiveness….”

Huddleston added, “We also seek forgiveness on behalf of those whom we represent. We know what has transpired cannot be changed, but we are asking the forgiveness of all those who have been hurt by past issues surrounding the relationship with the Missouri Baptist Convention. We seek to lock arms and be fully reconciled as Christ followers.”

In his letter of response, Muniz wrote, “We welcome the opportunity to explore ways the ministries of the MBC and Windermere might advance the work of the kingdom in a manner that benefits and blesses Missouri Baptists and others.” He also made it clear that no member of the MBC Executive Board “harbors any personal animosity toward Windermere board members, staff, or ministry.”

In 2001 Windermere’s self-perpetuating board voted to break away from the MBC. For more than a decade afterward, the convention sought through litigation to return Windermere to the governance of the MBC. However, in 2013, a Camden County judge denied the convention’s bid for a jury trial. In 2014, the Missouri Supreme Court refused to reconsider that ruling, ending the litigation with Windermere.

In other business, the Executive Board:

• recommended that the 2019 MBC Annual Meeting Offering “be given to the Tri-County Baptist Association to use in partnership” with First Baptist Church, Kimberling City, for the church’s Reeds Spring ministry project.

• approved changes in the MBC Nomination Committee Profile Form by adding a question about the nominee’s willingness to submit to a background check prior to serving as a board member with the MBC or its entities. Though background checks are often required by the MBC and its various entities, the Executive Board proposed this further safeguard “in light of the climate” in the SBC and wider culture “regarding sexual abuse”;

• approved a request to “begin a capital campaign to help renovate the interior and exterior” of the Baptist Student Union building in Rolla. The board also granted permission to pursue renovations once the funds have been received;

• recommended that “the Approved Investment Institution Section of the MBC Investment Policy be changed to read ‘The MBC shall invest its funds with the Missouri Baptist Foundation (MBF), financial institutions with which the MBC has a banking relationships and any other institution approved by the Business Services Committee’”;

• recommended the list of exhibitors for the 2019 MBC annual meeting;

• recommended that MBC host its 2021 annual meeting at the Branson Convention Center and Hotel in Branson, Oct. 25-26;