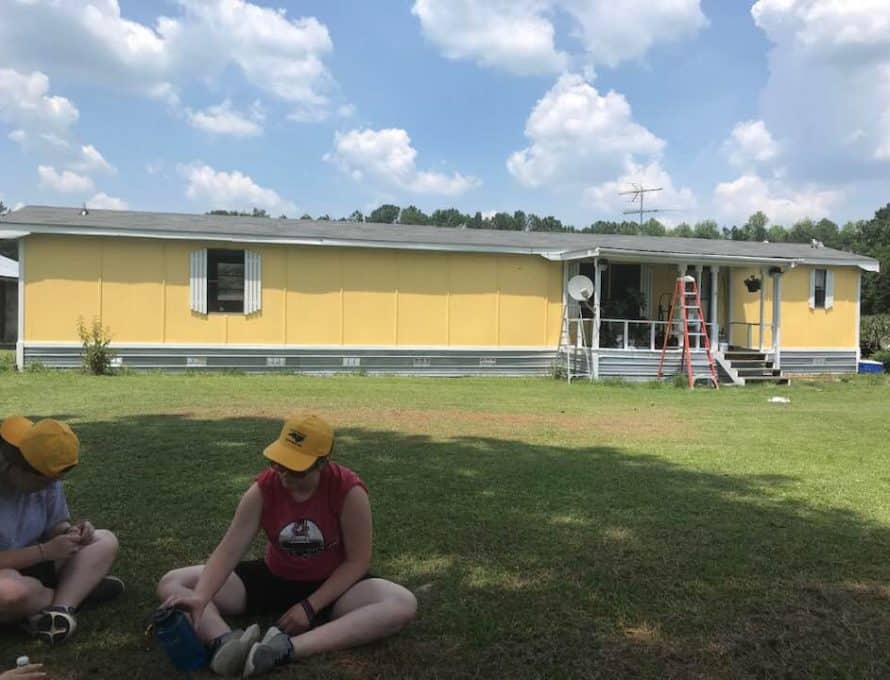 WALLACE, N.C. – It’s been nearly a year since Hurricane Florence left the North Carolina coast water-logged and battered, but the survivors of the storm are still in the process of getting their lives back to normal. And even though the initial headlines have faded, Missouri Baptists are still at work bringing help, hope and healing to their brothers and sisters 1,000 miles to the east.

Union Hill Baptist Church, Holts Summit, sent four adults and four students to Wallace, N.C. in late July for a week of work in Jesus’s name. There, they were dispatched by other Southern Baptist Disaster Relief workers to two homes. One, they painted for the homeowner. In the other, they tore out plaster and lath. That a job like demoing plaster still remains 11 months after the storm testifies to just how massive the disaster was, and to the need for an ongoing, long-term response.

“The amount of work is staggering,” said Frank Whitney, pastor of Union Hill. “They have jobs lined up two or three years out. Disaster Relief is going to be going on there for a long time.”

But for those two homeowners, some help from Missouri Baptists made the recovery task seem just a little more manageable. Despite temperatures well over 100 degrees, oppressive humidity and no air conditioning, the Union Hill team got the job done and saw some of the impact a helping hand can have.

“Both homeroom owners were familiar with Disaster Relief,” Whitney said. “None of us can really imagine what it really feels like for everything to be destroyed. But our kids showed compassion, and they not only witnessed by example, but they shared their love for Christ. We went for the purpose sharing the gospel but also working, getting some things done. And we did that, and they were both homeowners were very, very appreciative.”

While the need is great during the first days after a disaster, having a deep bench of trained volunteers ready to keep up the work and ministry weeks, month and even years after the skies have cleared is key to continued Disaster Relief ministry. With that in mind, Missouri Baptist Disaster Relief has two more training events on the calendar this year: at First Baptist Church, Dexter, Sept. 13 and 14, and at Baptist Ridge Camp in Warsaw, Oct. 4 and 5. Those interested can go to www.mobaptist.org/dr/dr-training/ or call 1-800-736-6227 ext. 317.