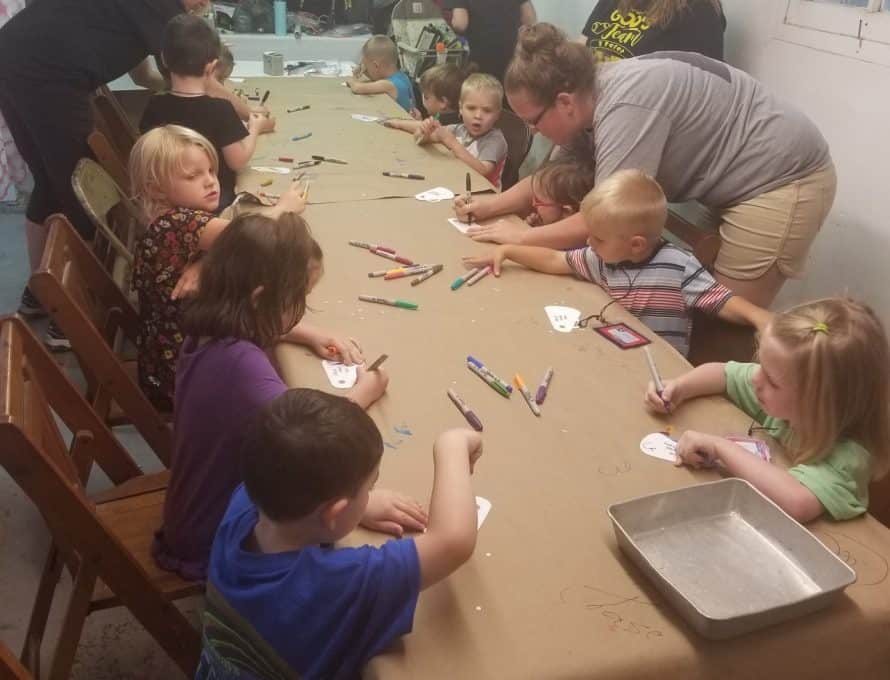 OWENSVILLE – After a schedule trial and error method, Mount Pleasant Baptist Church outside of Owensville discovered a winning and unusual time for Vacation Bible School.

“We started VBS on Wednesday night,” Dennis Spurgeon, pastor, said, “then, Thursday and Friday nights. On Saturday morning, we met 9-11:30 with our last session on Sunday morning.”

“This schedule just clicked for us,” Donna Spurgeon, VBS director and pastor’s wife, said. “We are a small country church 13 miles south of Owensville, out in the middle of nowhere.”

“Many people asked us,” she continued, “where all these kids came from. But we were diligent in promoting. Many of the church members brought children in and word of mouth really worked for us. We increased enrollment with each session.”

On Sunday morning, the church turned their service into Family Day. “We were very excited about this celebration service,” Dennis said. “We gave the children their awards, used them in skits, songs and showed the video of the week. We had 90-100 people there. Last year, for Family Day, we only had 70-80 people.”

“Our mission project was Operation Christmas Child,” Dennis continued, “so we showed a Samaritan’s Purse video to show the parents where their gifts were going. They brought so many nice gifts that we will be able to increase our shoeboxes this year.”

After the service, the church invited the children and their families to a tailgate party. “It was just like an old fashioned VBS out under the oak tree,” Dennis continued. “We grilled burgers, brats and hot dogs,” he said. “We had the church members bring some side dishes and we asked the others to just be there.”

According to Dennis, one of the highlights for the children after the tailgate lunch was the water balloons. “Tim Jenkins, our recreation leader,” Dennis chuckled, “worked all the kids up to throw water balloons at the pastor. So, I had 2-300 water balloons thrown at me. They loved that.”

Mount Pleasant used the “Game On” theme from a previous LifeWay year. “We get the VBS curriculum from FBC Owensville after they use it,” Donna said. “Each year, after they have VBS, I go to their church and pick up the items for use the following year. I sometimes go to two churches to get the materials to make sure that I have everything for the following year. We keep them in a storage locker until the following spring.”

“It is so wonderful for the churches to cooperate and work together,” Dennis said. “We are a small country church and we can’t afford all of the great VBS materials. When they pass on what they have used, it saves us an expense.”

Both Spurgeons enjoyed using the “Game On” theme. “The kids loved to focus on sports and Team Jesus,” Dennis said, “Every classroom shared teaching about Jesus.”

“The children seemed to do even better on the Bible verses this year,” Donna said. “Usually they have some trouble, but they worked hard and knew the whole verse this year.”

One of the boys in the fourth-sixth grade class accepted Christ on Sunday. “I asked his dad if he knew that his son was going to come forward,” Dennis said. “He said, ‘I didn’t know, but he has been asking me a lot of questions after VBS.’”

Both Dennis and the boy’s father agreed that the young man’s decision was the best Father’s Day gift ever.