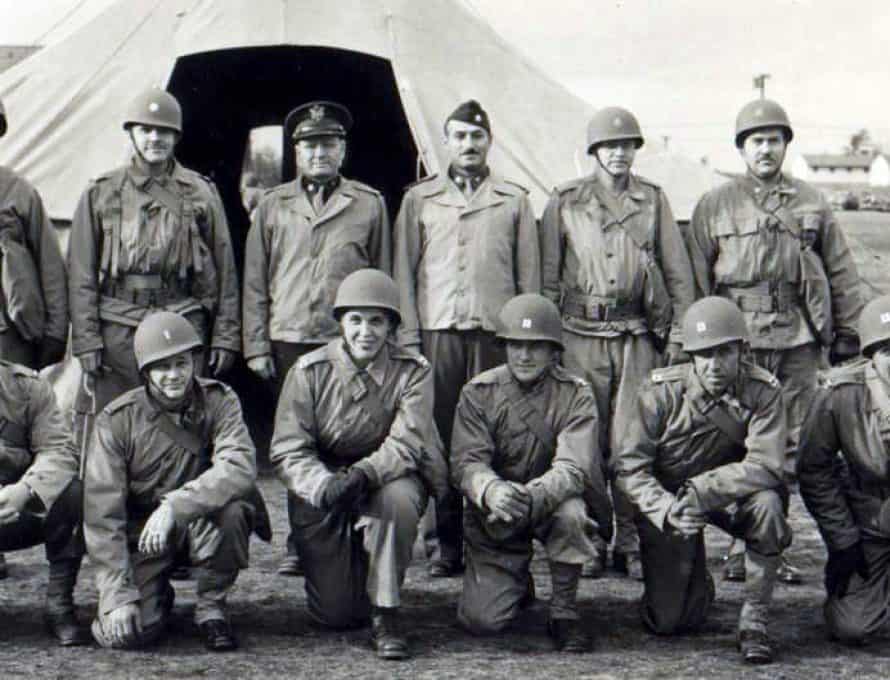 Southern Baptist chaplain John G. Burkhalter (first row, left), who was in the initial wave of Allied soldiers landing at Omaha Beach, recounted that he "prayed so hard, especially as I saw those suffering men (my men) scattered here and there and seemingly everywhere in front of me." Arlington Cemetery photo

EDITOR’S NOTE: This is a first-person article by Chaplain (MG) Doug Carver, USA-Retired, executive director of chaplaincy for the North American Mission Board. The article is adapted from his address honoring veterans on the opening day of the June 11-12 Southern Baptist Convention in Birmingham, Ala.

BIRMINGHAM, Ala. (BP) – Seventy-five years ago, in June 1944, after the largest amphibious landing in history, U.S. and Allied forces began their offensive push from the blood-soaked beaches of Normandy to the east of France and deep into Germany with the intent of restoring freedom to Europe and preserving it for the rest of the world.

More than 160,000 troops landed at Normandy on D-day. An unknown number of chaplains were there as well, providing a comforting glimpse of God’s presence in the chaotic fog of war.

One of those chaplains was Southern Baptist chaplain John G. Burkhalter. In 1943 he left his pastorate at West Flagler Park Baptist Church in Miami, to become an Army chaplain. A year later he deployed with the 1st Infantry Division to Europe and became part of the initial wave of Allied soldiers landing at Omaha Beach. In a letter to his wife Mable (published in the Miami Daily News on Aug. 6, 1944), he described his combat experience at Normandy:

“I prayed through the night as we approached the French coast but now I began praying more earnestly than ever as I stood in line waiting to get off the landing craft to go onto shore. Danger was everywhere; death was not far off. As we lay there hugging the earth … to escape shrapnel from artillery fire and bullets from snipers, the birds were singing beautifully in the trees close by. Nobody can love God better than when he is looking death square in the face and talks to God and then sees God come to the rescue.

“Ernie Pyle (a war correspondent) came ashore the morning after the assault and after seeing the results of what took place the day before he wrote, ‘Now that it’s all over, it seems to me a pure miracle we ever took the beach at all.’ There were a lot of miracles on the beach that day … because God was on the beach; I know He was because I was talking with Him all the time. I prayed so hard, especially as I saw those suffering men (my men) scattered here and there and seemingly everywhere in front of me.”

Today our 3,627 endorsed Southern Baptist chaplains carry the torch of “Who’s your one?” into difficult and, at times, dangerous places hard to reach by most churches.

They find that one during a ride along with a police officer; at the bedside of a terminally ill patient; in an ICU waiting room with a spouse anxious to hear a word of hope from the surgeon; at a disaster site with a family who just lost everything; in a corporate office with an executive who needs Jesus as his CEO; in front of a prison cell with an inmate facing a life sentence; or praying with an anxious service member in a combat environment.

Regardless of the institutional environment, our chaplains tirelessly look for that one God sends their way. And when they find that one, they have the complete freedom to preach the whole counsel of God, to offer our Bibles and Christian literature, to promote the Gospel freely as guaranteed by the Constitution of the United States and, yes, to pray in the name of Jesus. Soul-winning not only remains one of the many priorities of a chaplain’s ministry, but we as Southern Baptists expect them to practice evangelism. Our chaplains, in fact, keep the Gospel above all in their ministry. They have recorded nearly 40,000 professions of faith in Jesus Christ in the past two years.

Chaplain (Major) Phil Kramer is the lead pastor at Fort Benning’s Crossroads Chapel in Georgia, where each week more than 400 soldiers and family members attend vibrant, Jesus-centered services. He’s also the senior chaplain for the Army Rangers, where he and his team have cultivated