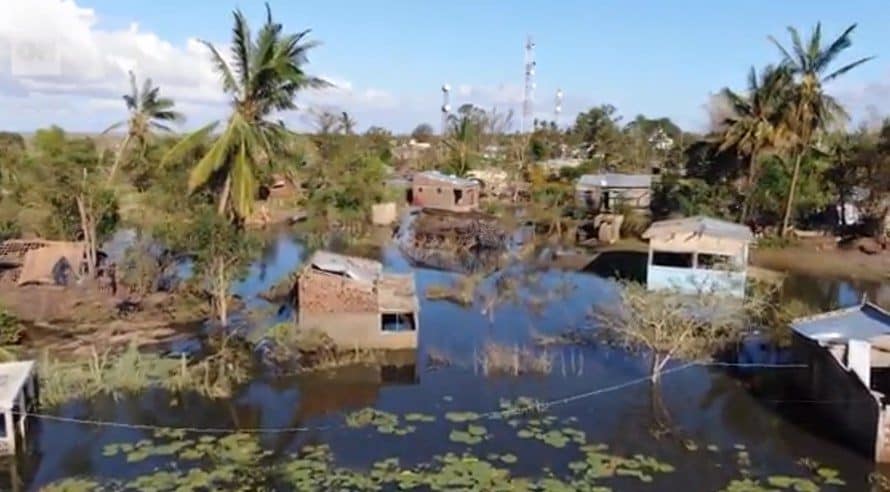 Cyclone Idai in Mozambique has left at least 446 people dead and nearly 110,000 in shelters. Screen capture from CNN

TICA, Mozambique (BP) – Following a cyclone in Mozambique that killed at least 446 people, Baptist Global Response and the International Mission Board have begun disaster relief ministry in the southeast African nation and are preparing to broaden their response.

“We have implemented a water and sanitation project in one of the displaced communities but are gearing up for some food and household goods distributions,” said Jeff Palmer, executive director of BGR, a Baptist relief and development organization.

“Food, water and shelter are the greatest needs at this time as well as the need for the &#91;floodwater to recede&#93; to allow response to the needy and displaced. We are currently distributing plastic sheeting/tarps to help with temporary shelter and privacy barriers in the makeshift camps.”

One challenge, Palmer told Baptist Press via email, “has been access to the &#91;affected&#93; areas due to the floods and damage to transportation.”

Cyclone Idai made landfall March 15 as a Category 2 storm with 110-mile-per-hour winds, according to media reports. The death toll is expected to rise as floodwaters recede and response teams can reach victims, the United Nations Office for the Coordination of Humanitarian Affairs reported March 25.

More than 1,500 people were injured by Idai, and nearly 110,000 are in shelters, according to the UN. One eyewitness reported seeing 300-400 dead bodies wash up on a flooded stretch of road, CNN reported.

Some $10,000 in BGR aid released thus far has gone toward buying the plastic sheeting used for latrines and temporary shelters, Palmer said. IMB workers have distributed nearly one mile of plastic sheeting in all — every bit of sheeting that could be purchased locally.

An additional $50,000 in BGR aid is expected to be released in the next two weeks, Palmer said. It will be used for “food and household goods such as cooking sets &#91;and&#93; hygiene kits.”

Located east of Zimbabwe along the Indian Ocean, Mozambique covers nearly twice the geographic area of California, according to the CIA World Factbook. Most Mozambicans speak one of several local languages. Only 10 percent speak Portuguese, the official language.

Mozambique’s population of approximately 30 million is 53 percent professing Christians, including 13 percent evangelicals, according to Joshua Project, a website that provides religion data on world nations.

Relief efforts in the weeks to come likely will rely heavily on Mozambican national Baptist partners, Palmer said, but there may be opportunities for U.S. volunteers.

“The center of our Baptist partners in Mozambique is in some of the hardest-hit areas,” Palmer said. “Pray for our churches and leaders there who are stepping up and seeing this as an opportunity to reach out to their neighbors with kindness, compassion and the love of Jesus.”