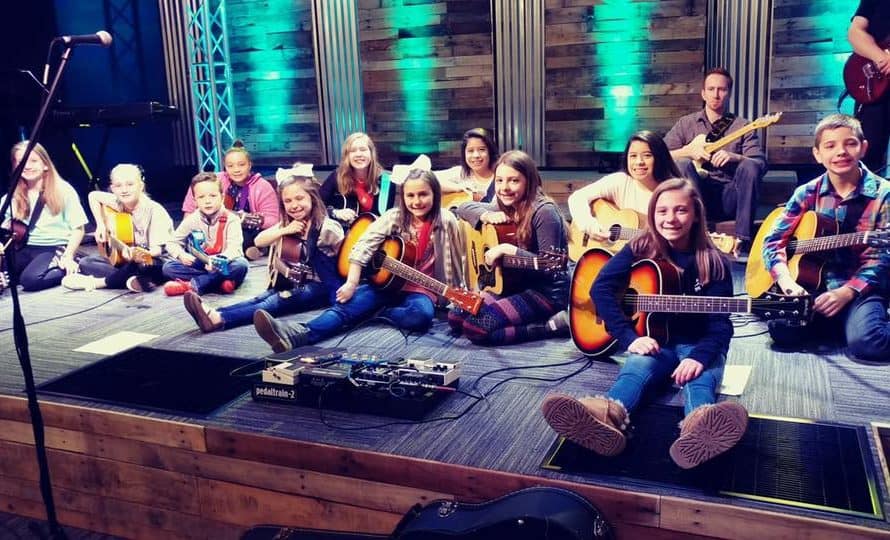 FENTON – Connect Church here holds Guitar Clubs for children as one method for reaching out to the community with the Gospel.

FENTON – One church plant’s musical method for building relationships has struck a note for residents of this St. Louis suburb.

Connect Church, a Missouri Baptist affiliated church plant here that launched on Easter 2015, is making connections in Fenton by hosting a Guitar Club for area children. During Guitar Club, Connect Church’s founding pastor Chris Perstrope – also one of the Missouri Baptist Convention’s newest multiplying churches missionaries – helps children learn the basics not only of playing the guitar, but also sometimes of playing the piano or singing.

Occasionally, the church invites children in the Guitar Club to perform for them. The children are motivated, Perstrope said, by the thought of performing in front of a live rock band – that is, Connect Church’s worship band. The parents, many of whom are unbelievers, appreciate the opportunity for their kids to perform.

“I see music as a tool to share the gospel,” said Perstrope, a Southwest Baptist University graduate in music education who served as a worship leader at churches in Missouri, Florida and Indiana for 13 years before sensing God’s call to plant a church.

But for Fenton and others at Connect Church, the Guitar Club is not ultimately about music. Rather it is a way to build relationships and, ultimately, to make disciples in St. Louis County – statistically, one of Missouri’s most unreached counties.

Nor is the Guitar Club the only way that Connect Church is reaching its community. Although the church met during its first two years at Uthoff Valley Elementary School, it bought a building in 2017 – sold to them by Springdale Baptist Church, Fenton, which was closing its doors. Since that time, church members who’d invested primarily in set-up and tear-down at the school were now able to use other gifts to reach the community.

Partly, as a result, Connect Church now operates ministries on a daily basis: For example, the church offers Financial Peace University classes, Celebrate Recovery, American Sign Language training, and fitness programs. Connect Church also takes the gospel into the nearby Missouri Eastern Correctional Center. As a result, some former inmates are now church members who lead in Celebrate Recovery and other ministries within the church.

“Our single goal,” Perstrope said, “is to connect disconnected people to the Lord.”

In his new role as a multiplying churches missionary for the MBC for northeast Missouri, Perstrope hopes to ensure that MBC church planters in the region remain connected with the MBC and its churches – so that “they don’t feel isolated, but they feel supported.”

Perstrope is one of four MBC multiplying churches missionaries. His colleagues include: Brian Grout (northwest Missouri), lead pastor at the Church at Three Trains in Independence; Omar Segovia (multiethnic churches); and Adam Stoddard (southern Missouri). These MBC missionaries work as liaisons among churches, church planters, directors of missions, the North American Mission Board and the MBC to help train, mentor and prepare the next generation of church planters.