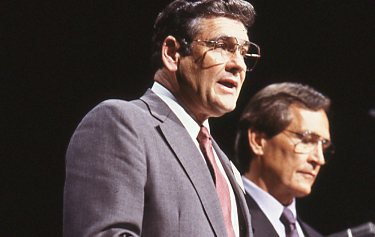 Formed in 1985 in response to a motion at the SBC annual meeting, the Peace Committee was charged to “seek to determine the sources” of controversy amid the convention’s Conservative Resurgence and “make findings and recommendations.” Fuller was thought a natural fit to chair the 22-member group – which comprised conservatives, moderates and centrists – because he was theologically conservative and committed to the SBC but not part of the Conservative Resurgence’s “machinery,” as Fuller put it.

Among Fuller’s other denominational service, he preached the convention sermon in 1985 to the largest SBC annual meeting in history and served on multiple SBC boards and committees, including stints as chairman of the Radio and Television Commission and the Committee on Order of Business.

During Fuller’s 38-year pastorate at First Baptist Church in Roanoke, Va., he saw membership grow from 2,000 to 6,000 and became somewhat of a local celebrity in southwest and central Virginia for his radio and television broadcasts. Most famously, he delivered a daily 60-second radio devotional called “God’s Minute,” beginning in 1972.

Fuller was preceded in death by his first wife of 44 years, Pat, and his second wife of four years, Margaret. He is survived by his third wife Carol, three sons, eight grandchildren and five great grandchildren.