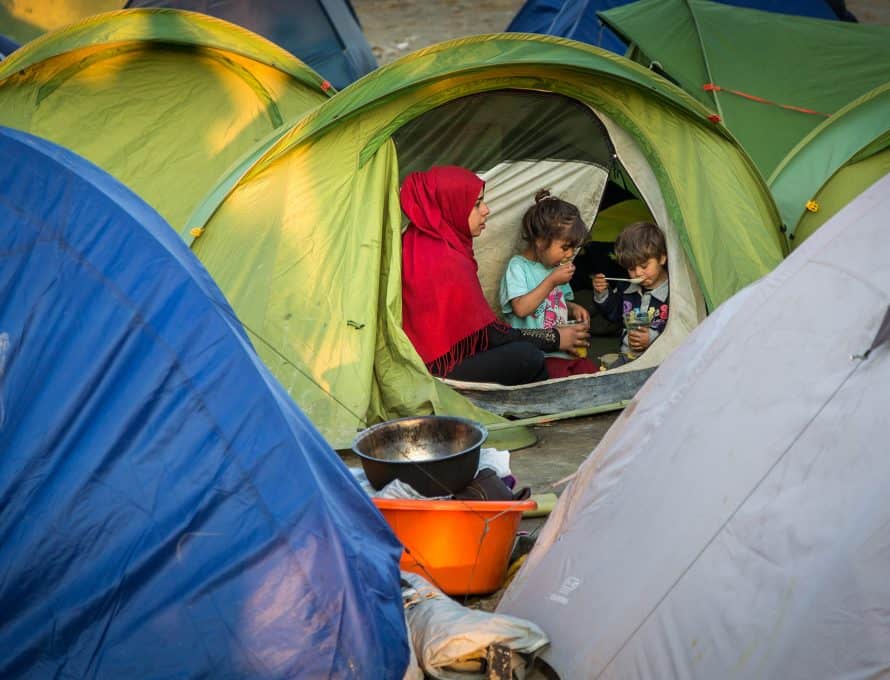 Children get a bite to eat at a temporary migrant camp at Idomeni, Greece, near the Macedonian border. Aided by Southern Baptists, migrant Christians are sharing the hope of Jesus Christ with fellow migrant workers in southern Europe. IMB photo

GREECE (BP) – Waseem* could never be accused of lacking passion.

Having grown up in a Christian family in Pakistan, Waseem often defended his faith in heated religious debates with Muslims on the streets of Lahore. He brought his fervor with him to southern Europe where he sought work — and more arguments about the Gospel with fellow Pakistani migrants.

Over time, God used the counsel of other Christians, and even a stint in jail, to redirect Waseem’s energies toward a biblical model for evangelism, discipleship and church planting. He began sharing the Gospel in love and has trained more than 40 Pakistani Christians in Greece to plant churches.

Waseem regularly goes to a local park to look for evangelism opportunities. During one such outing, he met Shakeel*, a fellow Pakistani migrant worker. Waseem shared the Gospel with patient conviction, and Shakeel believed.

Three weeks later, Waseem and Shakeel were making their way to a body of water for Shakeel’s baptism. As they traveled, Shakeel’s invited friend Navrel* quietly listened to Shakeel’s testimony and Waseem’s explanation of the Gospel.

By the time they reached the place of baptism, Navrel decided he, too, wanted to join Shakeel in his commitment to Christ and obedience in baptism. The two friends were baptized and have been passionate proclaimers of the Gospel ever since.

Waseem continues to disciple Shakeel as well as travel with Christian Pakistani migrant workers, training them in evangelism as they harvest olives, oranges or whatever is in season. God continues to use Waseem’s harnessed passion as an itinerant pastor, trainer and laborer to reach and train Pakistanis who would otherwise be adrift in complacent Christianity or religions devoid of hope.

Gifts through the Cooperative Program and the Lottie Moon Christmas Offering support Southern Baptists who are aiding believers like Waseem, Shakeel and Navrel and taking the Gospel to migrant workers in Europe who have never heard it, then discipling them as followers of Christ. Gifts allow Southern Baptists to live among people who are learning and growing as Christian leaders and disciple-makers. Thank you for giving.

• Pray for Waseem as he travels for weeks on end to meet laborers throughout southern Europe to train them in evangelism and church planting.

• Pray for Shakeel to grow in faith as he assists Waseem and participates in other relief ministries where Pakistanis are ready to hear the Good News.

• Pray for Navrel to stay strong in his faith as he works long hours to provide for his family.

In the aftermath of the reversal of Roe v. Wade, the Missouri Baptist Children’s Home is standing