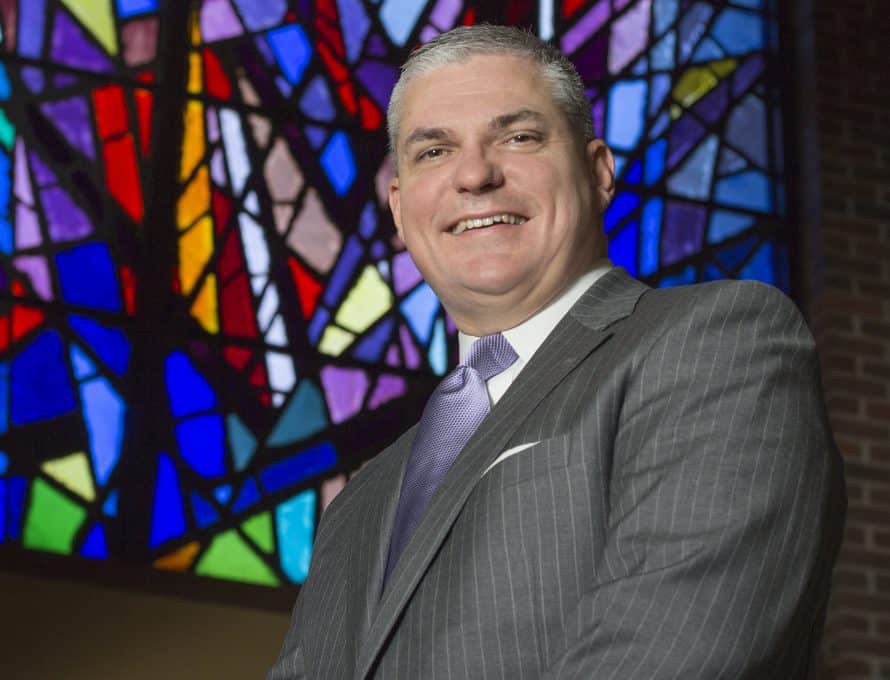 BOLIVAR — Dr. Eric. A. Turner of Pocahontas, Ark., was unanimously selected the 25th president of Southwest Baptist University on July 20 in a special meeting of the SBU Board of Trustees. He will begin his duties as president-elect Monday, Aug. 6, and assume the presidency on Sept. 1.

Dr. Turner, 46, is a current college president with a wide range of experiences and a strong calling for Christian higher education. He worked in fundraising, academics and accreditation at Williams Baptist University in Walnut Ridge, Ark., for 17 years before becoming president of Black River Technical College (BRTC) in Pocahontas, Ark., in 2014.

“Dr. Turner has demonstrated success in higher education leadership,” said Dr. Don Fahrni, chairman of the SBU Board of Trustees. “We are excited for his family to join the SBU family.”

At BRTC, Dr. Turner provided leadership and oversight for all areas of the college system. His leadership included rectifying long-standing issues related to finance, accreditation and academics. He led the college to develop its first comprehensive strategic plan, as well as a comprehensive outcomes assessment plan.

Even in the midst of addressing these issues at BRTC, he remained forward-thinking, launching three new market relevant academic degree programs and creating community partnerships to further the college’s mission.

“I was excited for both Eric and SBU to learn of his appointment to the presidency,” said Dr. Jerol Swaim, President Emeritus of Williams Baptist. “I have observed and interacted with him for nearly 30 years in a variety of settings as a church member, deacon, Williams student and a member of the administrative team at Williams. The 15 years we served together at Williams is a particularly meaningful and cherished time in my time as president. He is a classic example of the type of individual our Baptist colleges and universities strive to produce — individuals who live out their faith every day.”

He is active within Southern Baptist life as a member of First Baptist Church in Pocahontas and a board member for the Arkansas Baptist Foundation. He is involved in the community through local chambers of commerce and economic development efforts, as well as being a member of Rotary International.

“Eric has proven to be a principled leader within our board, denomination, and state,” said Bobby G. Thomas, president and CEO of the Arkansas Baptist Foundation. “His leadership has been thoughtful and thorough in moving toward our established vision and mission. Along with natural gifts and talents, Eric has always shown commitment to the task at hand. He has been a true team player and has managed to foster positive discussions, which have led to the best possible outcomes.”

He and his wife, Barbara, have been married for 23 years. Barbara has worked at Williams Baptist University for 21 years, currently as the director of financial aid. They have a 15-year-old daughter, Emma, who will be a sophomore at Bolivar High School.

“We are humbled, honored and excited to be joining the Southwest Baptist University family,” Dr. Turner said.

He desires to build on the legacy and foundation of a committed board of trustees and the 22 years of service by retiring SBU President Dr. C. Pat Taylor.

“At Southwest Baptist University, it is no secret we are unapologetically Christian in our approach and mission of being a Christ-centered, caring academic community preparing students to be servant leaders in a global society,” Dr. Turner said. “Equipping students to have a biblical worldview and a responsiveness to the world they encounter is the most important thing we do to accomplish our mission.”

Dr. Turner desires to ensure a first-rate Christian education in and out of the classroom by developing:

“This is the time for SBU to be the exemplar Christian university throughout the Midwest and to be the university of choice for Missouri Baptists,” he said.

The nationwide search resulted in 25 potential candidates. After prayerful and strategic consideration of the 17 qualified applicants, four semifinalists were selected for in-person interviews. A single finalist was brought to campus on July 16-17 and then recommended to and approved by the SBU Board of Trustees on July 20.

“Over the past few months, every interaction that I have had with Dr. Turner has been positive and productive,” said Dr. Allison Langford, chair of the presidential search committee. “He genuinely cares for people and has a down-to-earth yet professional approach to leadership. I look forward to serving SBU with him.”

Dr. Turner succeeds Dr. C. Pat Taylor, who announced in January that he will retire Aug. 31 after 22 years as president. Effective upon his retirement, the Board of Trustees has given Dr. Taylor the honorary title of President Emeritus.

“SBU will be in great hands with Dr. Turner, and I expect a smooth transition of leadership,” Dr. Taylor said. “His experience as a college president will serve him well. I couldn’t be more pleased.”

SBU is a private, four-year comprehensive Christian university offering more than 80 areas of academic study on campuses in Bolivar, Mountain View, Salem and Springfield. Founded in 1878, the University enrolls 1,400 undergraduate students in Bolivar with a total enrollment of 3,600.