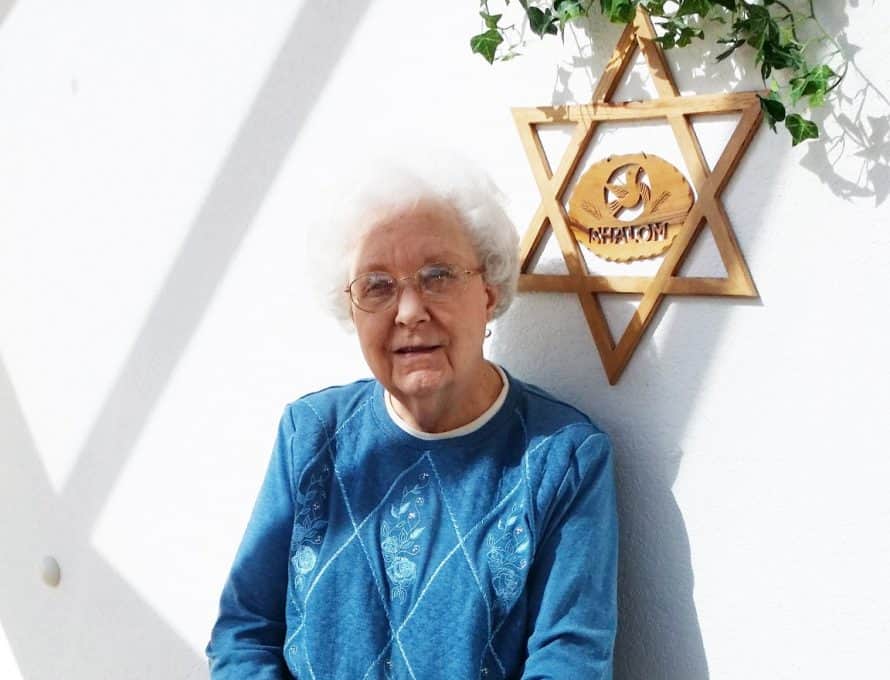 MOUNT VERNON – On the south lawn of the historic Lawrence County Courthouse Nora Lewis, 84, closes her eyes to pray.

Lewis, a member of First Baptist Church (FBC) here, never misses a “Prayer on the Square” meeting. It’s her standing appointment every Thursday at noon for the last eight and a half years.

“Rain, shine, snow storm or heat, Nora has been a part of our prayer group since the beginning,” said Rabbi Eukel, who leads Kehila Nahar Zerach River Rising Congregation, a Messianic Jewish and Gentile fellowship here.

Everyone in the community is invited to the prayer gathering, which Rabbi Eukel started and leads.

“Even on the hottest days God seems to bless us with a breeze blowing,” said Lewis. “We pray for the local government and the national government, elections and just whatever is on our hearts. It’s a sweet fellowship.”

Lewis and her late husband, Dr. Mel Lewis, moved to Mount Vernon about 20 years ago and became involved at FBC right away. Dr. Lewis became a deacon at FBC and for many years they taught a couple’s Sunday school class.

But then God shifted Lewis’s calling from teaching to praying. She knows the power of prayer and she knows consistent and faithful prayer makes a difference.

“Most of us receive answers to prayers every day and some things we may not even remember we prayed about but the Lord blesses us because He loves us and wants us to call on Him,” Lewis said.

Rabbi Eukel started the weekly prayer meeting after the 2010 National Day of Prayer, which is annually observed in May.

“We thought why should we wait and only pray for our leaders once a year?” Eukel said. “God’s ears aren’t dull to our prayers and His arms aren’t short to our needs. So we gather together.”

While the group prays for whatever is relevant and timely in Lawrence County, they also have 52 themed intercessions for each week they meet.

“We are praying specifically for righteousness in our leaders and in their leadership,” Eukel said. “Last week we prayed for our Supreme Court justices as well as the entire state of the union. We will pray for the U.S. Senate this Thursday and Valentine’s week we will pray for righteousness in our Missouri marriages. Of course whatever is on their hearts, we will give voice to it.”

Lewis and Eukel agreed that the church as a whole does not unite in prayer nearly enough.

“We know that whenever a house of worship advertises a prayer meeting it is the least attended meeting they offer,” Eukel said. “With hearts that lack seasoning and maturity to make prayer a priority it seems like one could easily get despondent, except the mature recognize the models we have for prayer in scripture and that the Lord can bring great victory with only one sword and some broken vases. It isn’t a matter of numbers, it’s the quality of hearts.”

While the group certainly prays for those who are already elected officials, they also pray that more born-again believers would rise up and step up to the political arena. The American Renewal Project is a movement that encourages “people of faith to positively affect public policy.” Eukel said there are not enough people like Lewis who are willing to faithfully do what they can to support righteousness of their leaders.

“It seems that those who are most prepared to share God’s word are the least involved in the public arena,” Eukel said. “It’s sad to see that in the rough and tumble world of politics there are not enough strong believers who will stand up on Godly principles and lead the people. That starts local and we are praying for those people to rise up and show our school boards, our cities, our counties, our state and our nation a more excellent way.”