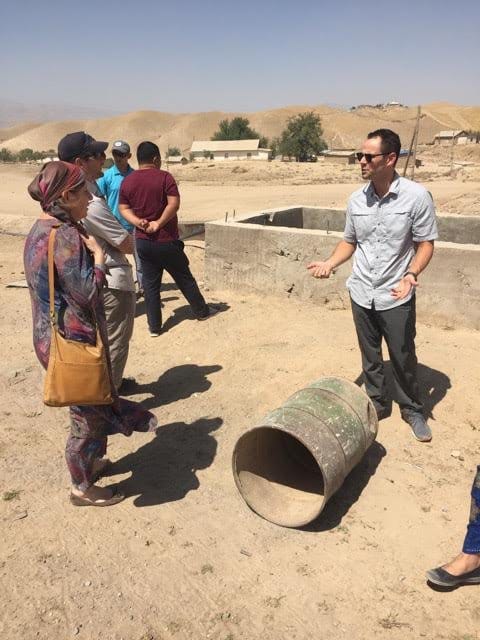 A team from Movement Church in metropolitan Richmond, Va., traveled for the fifth time this summer to Central Asia, where they ministered alongside International Mission Board personnel and local Christian leaders to build water wells in the parched land. Submitted photo

“The work is thrilling,” said Cliff Jordan, a church planter and pastor of the eight-year-old Movement Church, where about 250 people attend Sunday morning worship. Jordan appreciates International Mission Board (IMB) missionaries who laid the foundation for his mission team to arrive in the village and make a difference in a relatively short time, he told Baptist Press.

“The folks (IMB sends) to the area line up the work,” Jordan said, “and work with the nationals who do the work.”

Providing nearby access to water is both a relationship-building endeavor and a Gospel witness illustration, Jordan said. The economic boost to families there who help dig the wells adds to IMB’s effective ministry, the pastor noted.

In what was their fifth trip to Central Asia, the church team saw again the benefits of CP — the Southern Baptist Convention’s giving channel for missions and ministry — during a week with IMB and other Christian leaders there. CP support, Jordan said, paved the way for the advance of God’s kingdom work by opening hearts of people who otherwise would be mistrustful of strangers to their land.

“We have a large presence in Central Asia,” Jordan said. “We followed relationships and God has kept us there.”

In the same way, Movement Church has a large and growing presence in the Richmond metropolitan area. It’s a church organically built on relationships, which allocates 10 percent of undesignated offerings to missions through the CP.

“It’s a baseline; that’s what we tell our people,” Jordan said. “Think of 10 percent as the floor, not the ceiling.” Movement Church has allocated 10 percent to the CP since its first Easter Sunday worship service in 2010.

“We just believe we can do more together than we can do by ourselves,” Jordan said. “The few dollars become a lot of dollars when it’s all pulled together.”

Jordan and his wife April were students at Southeastern Baptist Theological Seminary when they were called to church planting. They began to pray for direction and determined they should work in a city rather than a small town or rural area “because of the influence of a city,” Jordan said.

When Richmond was suggested, Jordan initially thought there would be many Southern Baptist churches in the traditionally Southern city. But he learned that about 80 percent of Richmond was under-evangelized. Jordan connected with other church planters in the area, home to more than 223,000 people in the city and nearly 1.3 million in the greater metropolitan area.

“It was a great time to be planting a church,” Jordan said. “We felt a synergy there with others who were there to plant churches. We were really thrilled to see the need and when that matched up with the calling, we never looked back.”

Movement Church started in the summer of 2009 with six people meeting in the Jordans’ living room.

“We decided if anything’s going to happen, we’re going to have to live our lives on mission,” the pastor said. “Our relational lives began to spread, and once the snowball started going, it grew…. I’ve got a Bible study today with guys I met from basketball that first year.”

As the group outgrew the Jordans’ living room, Movement Church started a second Bible study led by co-planter Robby Christmas, who was with the church its first five years. The two men developed leaders “by recognizing people with leadership potential and pouring ourselves in them,” Jordan said. As they did so, the new leaders started additional Bible studies.

“Early on we took the groups through our vision and our values, and went through Bible book studies,” Jordan said. “When we went to having Sunday morning worship, we started having the community groups study extensions of the sermons.”

For the last five years Movement Church has been meeting in leased warehouse space in a revitalized part of Richmond, but over the last 18 months has been looking for something larger. Concurrently, the withering Patterson Avenue Baptist Church, about a mile west of Movement, was considering what to do with its aging property when it disbanded.

After many discussions, originally orchestrated by leaders from the Baptist General Association of Virginia, both churches agreed earlier this summer that Movement Church was to be given the disbanding church’s property. Renovations will be costly but affordable, Jordan said, since the congregation won’t have a mortgage.

“The whole relocation is going to allow us to get one step further down the road to our vision of planting churches around Richmond,” Jordan said. “Everything is going to be based on what the mission is, what the need is…. It’s less about our vision than it is God’s vision for our city.”

The church has grown organically, he said, because “when people are captivated by the glory of Jesus, lives begin to change. It’s the difference between trying to change behaviors, which affects the surface, and changing hearts from the inside out.”

Grove Church (formerly called Grove Avenue Baptist Church), a fellow Southern Baptist congregation in Richmond with Mark Becton as pastor, sent some of its members to help Movement for six months, Jordan said. Some of them stayed with the new congregation.

Today Movement Church has 16 community groups, each of which also take on mission projects in their area of the metro region.

“Our people are our growth strategy,” Jordan said. “We’re putting all our eggs in that basket. We don’t do marketing and big events. We grow organically. Mission is best fulfilled at its most local level, from the bottom up.”

Most of those involved in a community group also participate in Sunday morning worship. “You can’t focus just on one aspect,” the pastor said. “Both small group and large group gatherings make a balanced diet.”

Movement has a vision to be a church that plants additional churches “in and around Richmond and beyond,” Jordan said. The first church plant began this summer. The next one, he noted, may not start for a year or two as people in the church are called and equipped for leadership and church planting.