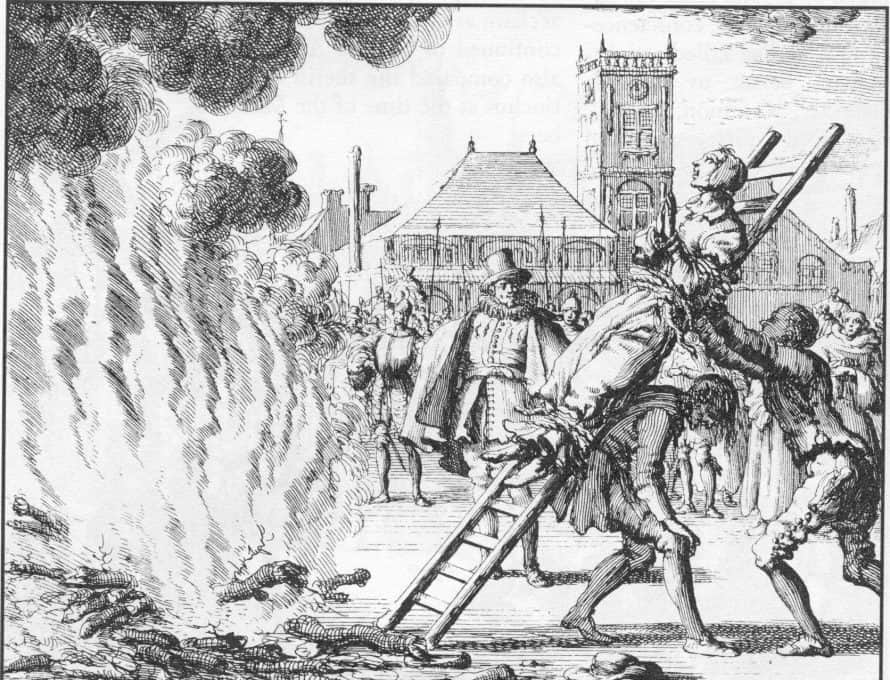 At one Anabaptist museum in Austria, visitors can see the chains with which Anabaptist women were shackled to their homes. Without their husbands’ consent, these women had accepted the Anabaptist message and were baptized. Yet, in these instances, the women were allowed to live, since their husbands needed them to raise their children and tend to their homes. But they would do so in chains.
These chains remind us of the intense persecution that the 16th-century Anabaptists suffered. Indeed, many women suffered for this cause; roughly one-third of the 900 Anabaptists mentioned in the Martyrs Mirror—a sort of Anabaptist book of martyrs, written in the 1600s—were women. Yet these women didn’t suffer alone.
Catholics and Protestants alike were intent on wiping out Anabaptism. They persecuted anyone who accepted or, especially, preached the Anabaptist message, seeing this so-called heresy as a spiritual disease that threatened the souls of men and women, as well as the stability of society. As such, Anabaptists were tortured, mocked, starved, imprisoned, beheaded, burned and drowned. And many Anabaptists expected nothing less than to suffer for their faith.
“It is surely true that as soon as one wants to begin living as a Christian, one experiences none other than Christ experienced,” Anabaptist Leonhard Schiemer once wrote. “It is to this that you are called, for Christ also suffered and left us an example, to follow in his footsteps.”
In 1527, Schiemer himself was imprisoned for seven weeks during a bitter Alpine winter before being beheaded and then burned. Partly because of Schiemer’s courage amid suffering, Pilgram Marpeck—who would become one of the few Anabaptist leaders to die naturally—soon accepted believer’s baptism. Marpeck later wrote that every follower of Christ must submit “to the fellowship of suffering under God’s hand and discipline.”
Schiemer, Marpeck and other Anabaptists had confidence that—in the words of Tertullian, a theologian of the early church—“the blood of the martyrs is the seed of the church.” But in the case of the Anabaptists, one may ask, “Which church?” Did any modern-day churches grow from the seed planted by the persecuted Anabaptists? Do modern-day Baptists themselves have Anabaptist roots?
Did the Anabaptist seed grow into the Baptist church?
Doubtless, the answer to the first question is, “Yes.” Several religious groups throughout the world can claim an Anabaptist ancestry. Among them are the Mennonites (named after the 16th-century Anabaptist, Menno Simons); the Hutterites (named after 16th-century Anabaptist Jacob Hutter); and the Amish (named after 17th-century Anabaptist Jacob Amman).
Yet the second question mentioned above is more complicated. In fact, historians have long debated whether the Baptist movement—which grew up in England nearly 100 years after the Reformation began—was influenced in any way by the Anabaptists.
This historical debate can be quite complex and nitty-gritty, looking even at indirect influences that the Anabaptists may have had on the later Baptists: For example, one historian has suggested that the Reformed emphasis on church discipline, which was later adopted by the English Baptists, was originally developed in response to the Anabaptist emphasis on church discipline.
Amid this complexity, one can safely say that the Anabaptists drew a line in the sand regarding some important truths of Scripture, and Baptists—whether they realized it or not—later sided with the Anabaptists regarding these truths.
“The Anabaptists of the Reformation have much to teach contemporary Baptists,” Paige Patterson, president of Southwestern Baptist Theological Seminary, said in 2012 during a conference on “Anabaptism and Contemporary Baptists.” He went on to note that, however interesting it may be, the question about the historical connection between Baptists and Anabaptists is really of little consequence. Nevertheless, he added, the Anabaptists championed five convictions that Baptists today should defend:
(Much of the content in this column has been adapted from articles that I wrote for the Fall 2012 edition of Southwestern News, the alumni magazine of Southwestern Baptist Theological Seminary in Fort Worth, Texas. I learned about the suffering of Anabaptist women from an article written in the same magazine by my former colleague, Sharayah Colter, who now serves as a writer with the Southern Baptist TEXAN).
EDITOR’S NOTE: This is the 12th column in a year-long series leading up to the 500th anniversary of the 16th-century Reformation on Oct. 31, 2017.