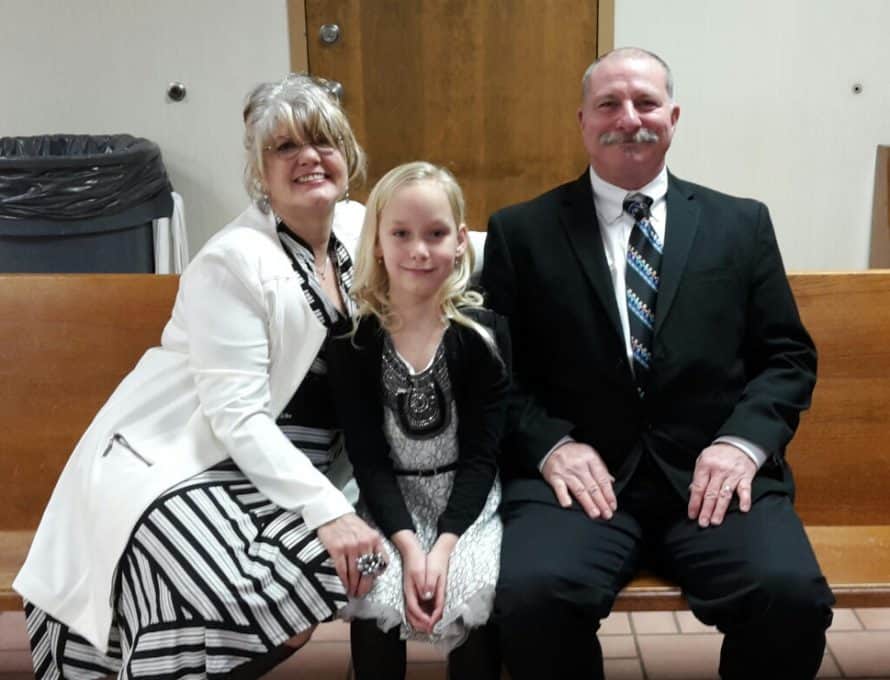 RICHLAND – Chris and Tammi Ferkel didn’t have any plans to adopt their new daughter, Summer. And yet, as is the case with most earthly plans, God’s plans took over. In fact, God had been laying the groundwork for Summer’s new family for multiple generations.

Chris is the son of a man who was orphaned in the early 1940s. Never fostered or adopted, he grew up as a newsboy in an orphanage in St. Louis. Chris’s maternal grandmother, also an orphan, came to Missouri on a Catholic orphan train from New York around 1900.

“She was ‘fostered,’ but it was two old spinsters who brought her into their house, and she was basically an indentured servant,” Chris said. “They never gave her their name or anything like that.”

It wasn’t until he became a trustee for Missouri Baptist Children’s Home several years ago that he realized God had been preparing him to “put boots to the ground” when it came to caring for kids in need. He volunteered at MBCH’s summer camp, and he was hooked.

“It was emotionally the hardest, most joyful experience I’ve ever had,” he said. “Hearing their stories reminded me what my father and grandmother must have been through, and the Holy Spirit filled me with a calling to start fostering.”

After discussing it with Tammi, – “It grew on her pretty quick,” Chris said – they started the process of becoming a foster home through the MBCH. Five years later, they’d provided a stable, temporary home for a dozen kids in crisis.

In August of 2015, eight-year-old Summer came into their home. She was in the foster care system apart from her two siblings, and after two months with the Ferkels, she went to live with her siblings. The reunification process did not go smoothly, and caseworkers and her foster parents agreed that she thrived best where she was an only child.

With their biological children grown and moved out of state, the Ferkels had just finished a short – term foster of three children, and were in position to provide Summer with an adoptive home, one where she would be the only child. Except, they weren’t sure.

“There were a lot trials and issues with our last placement,” Tammi said. “I was exhausted. We had decided we were done; it wasn’t my plan to have children in the home again. But God had a different plan. I got out of God’s way and I really do feel that He placed her in our home.”

The Ferkels prayed through the situation together, and were open and up front with Summer that they were welcoming her into their home, but they were unsure if adoption was in their future.

“Saying ‘no’ felt wrong, but saying ‘yes’ didn’t feel right at that moment, either,” Tammi said. “Adoption is a life-long commitment and we couldn’t say that in just one week.”

That was in March of 2016. Summer was happy with the arrangement and as the months went on, the Ferkels began to sense God’s affirmation that she was indeed a true fit for their family. The adoption became final Jan. 17 of this year.

“I think she was chosen just for us,” Chris said.

“She’s my daughter, and she’s not going anywhere,” Tammi said.

Though Summer has a new name (“Summer” was her choice), a new birth certificate listing the Ferkels and a new social security card, she still has a close connection to the family who adopted her siblings and live just 20 min away. The two families meet every other week so she can still be a presence in her 6-year-old sister and 3-year-old brother’s lives.

Chris urged people to be open about playing a role in a child’s life.

Even if adoption or foster care can seem too intimidating, Chris said providing “respite care” – providing a home for one night or a weekend – can be a great way to “dip your toe in the water.”

“Go through the classes,” he said. “There’s no obligation, and it’s free. Most of all, pray about it.”