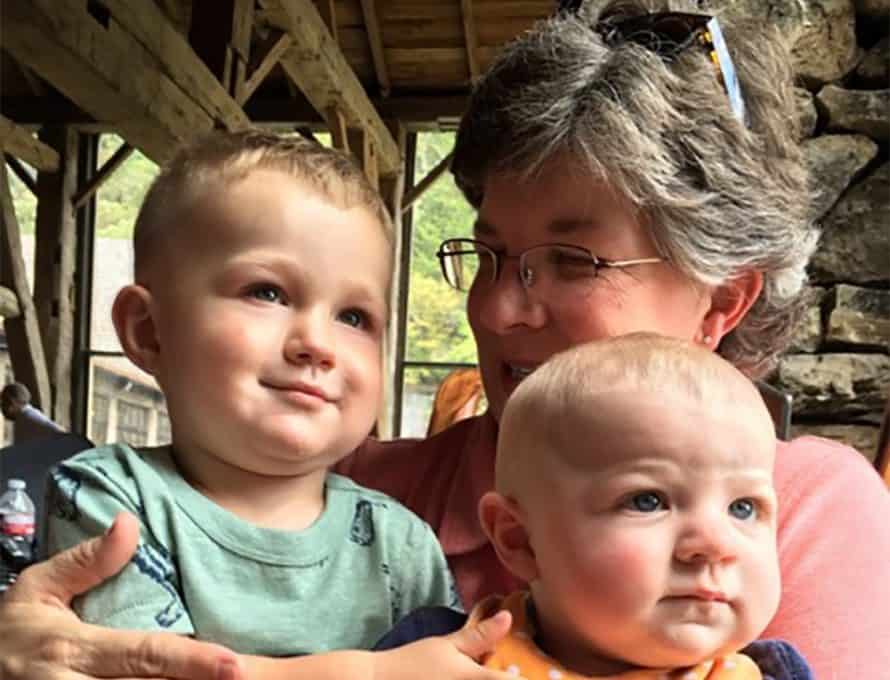 RICHMOND – Cara Peoples, a board member with the Missouri Baptist Children’s Home and member of First Baptist, Richmond, enjoys time with her grandchildren. Photo courtesy of Cara Peoples

RICHMOND— It’s strange for Cara Peoples to consider what her life would have been like if she hadn’t been adopted through the Missouri Baptist Children’s Home (MBCH) back in 1965. She said it would be totally different.

“I wouldn’t have grown up in Richmond, Missouri; I would not have met my husband, Claude and had our two girls and grandsons; and I would not be able to give back to the MBCH as a board member,” said Peoples, member of First Baptist Church Richmond.

Peoples was adopted when she was just ten days old by David and Ramona Leathers. She grew up on a farm in Richmond with an older brother and younger sister, both of whom were also adopted through MBCH. She’s always felt blessed to have the parents God gave her.

“We had everything we needed and most of what we wanted,” she said. “I knew I was adopted all along and I remember being teased some, and I just said, ‘Hey, my parents picked me and yours are stuck with you.’ I was proud of it.”

Though many members of the MBCH board are adoptive parents, Peoples is the first board member to have been adopted through MBCH.

“My pastor recommended me for the board because he thought I would bring a different viewpoint to the table,” she said. “I wasn’t sure if I wanted to do it at first, but we had a missionary come to our church and it felt like he was talking right to me. He said God gives you experiences that can be used for His glory and though you may not know exactly how things will work out, that will only cause you to lean more on Him.”

She’s since served ten years and is currently chairman of the board of trustees for the LIGHT House, a full service adoption agency and maternity home. The LIGHT House ministry is very special to Peoples because her birth mother stayed in a similar Kansas City maternity home while she was pregnant with her. The LIGHT House became an affiliate of MBCH in 2012.

“I have learned so much about MBCH’s many programs,” Peoples said. “Back in ’65 when my scared teenage biological mother found out she was pregnant she went to the Florence Crittenton Home for Unwed Mothers in Kansas City but said she was staying with a friend in Lincoln, Nebraska, as an alibi. Her choices were limited. Now we have maternity care, fostering programs and therapeutic foster homes, transitional living programs for young adults who are phasing out of foster care, and human trafficking rescue programs. For those who need the extra help we show them how to get a job, how to meal plan, and how to be a parent.”

Peoples’ adoptive father passed away in 1989 and her adoptive mother was diagnosed with Alzheimer’s in 1996 and lived under close care until she died in 2006. Meanwhile in November 1999, Peoples received a phone call that would give her a whole new group of people to cherish.

“When the lady called me she asked my name and birthdate,” she said. “I asked, ‘Why?’ She said she respected my birth mother and wanted to know if I was interested in talking to her.”

At Christmas that year Peoples met her biological mother, her grandmother and many other new relatives at her birth mother’s home in Jacksonville, Florida. She started talking to her birth father a few months later and met him for the first time at his home in Phoenix, Arizona, in the fall of 2000.

“My birth mother and I have known each other for 17 years now and we’ve become really good friends,” she said. “I’m blessed to have been adopted into a great family and I’m blessed to connect and learn about my biological family. The truth is, in each story we hear about we really only see a portion of the impact that the MBCH has on children and families across Missouri. One thing I do know is that we need to continue to work together to meet this vital need.”