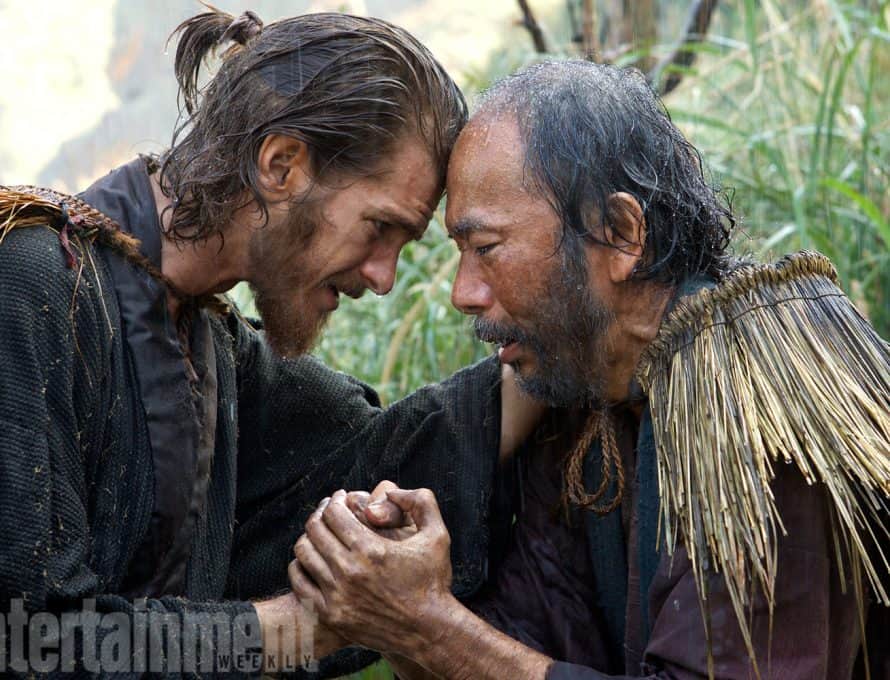 Father Rodrigues (Andrew Garfield) comforts a Japanese Christian who has been living in hiding in the new movie, “Silence.”

“Silence” is a clever title for this wholly remarkable film. It can refer to the hushed tones of two missionaries hiding in a secret room. I suppose it could also refer to the fear that keeps the 17th century Japanese believers worshipping in underground house churches. Or maybe it’s referencing the stony, wordless resolve those who refuse to recant their faith. It can even refer to the stunning, minimalist sound track, which features no music, and is content to let the credits roll to nothing but crickets. Finally, a central character suggests it references God’s apparent indifference to his suffering.

Whatever the meaning of the title and whatever theology quabbles you may have with the movie (and you will have some), “Silence,” directed by Martin Scorsese, is a powerful film I cannot recommend enough.

It is the arresting story of two Portuguese Catholic missionaries (Andrew Garfield of “Hacksaw Ridge” as Father Rodrigues and Adam Driver of “Star Wars: The Force Awakens” as Father Garupe) and their journey to 1630s Japan. Their goal is two-fold: determine the state of Christianity in the islands and discover the fate of the long-lost Father Ferreria (Liam Neeson). Once they arrive, they are joyously accepted by the underground remnants of Japanese Christians, though they live in constant fear of sword-wielding Shogun inquisitors who specialize in torture methods I’ve never even heard of.

When they are inevitably discovered, believers have a choice: a long, painful death or “korobu,” the public renouncing of their faith. One priest has a  response you and I would more or less find acceptable, while the other does not; I’ll not spoil who is who.

The plot is more complex than this –especially when we learn Ferreria’s fate – but to say more would ruin it.

Though the underground churches here are made up of 17th century Catholics, it is impossible not to think of faithful present-day believers meeting in secret in China, Iran, and other lands without religious freedom. The joy on the persecuted’s faces as they realize someone has come to teach and lead them is humbling. May we have the same passion for the Great Commission as is voiced by Rodrigues and Garupe, and the same resolve and determination not to forsake the Gospel as the local Christians.

Other scenes remind me of stories from our own missionaries overseas: the local leader whose simple faith humbles and dwarfs the missionary’s own; the linguistic troubles with translating the Gospel (apparently, early missionaries in Japan mistranslated “Son of God” as “sun of God,” causing understandable confusion); the struggle to find a “person of peace” in a place the inquisitors call a “swamp where your Christian doctrine can not take root.”

While the ending may not be as I wished, “Silence” is a worthy work of art for Christians to see and discuss. Based on the 1966 novel by Shusaku Endo, the particular plot is fiction, but it is based in reality and the true persecution that missionaries and Christians faced in after the Shimabara Rebellion in feudal Japan. Self-professed “lapsed Catholic” Scorcese is restrained but brutally honest and stark in his depictions of torture and persecution, and the effect is gripping. The finished product is intense and beautiful.

Garfield and Driver are both stupendous in their roles, but the two standouts, are Kichijiro (Yosuke Kubozuka), the priests’ constantly confessing Japanese guide and Inoue (Issei Ogata), the grand inquisitor. Kichijiro is the living embodiment of a new believer whose spirit is willing but flesh is weak. The inquisitor, on the other hand, is a chilling voice constantly offering seemingly reasonable justification to renounce one’s faith and “step on Jesus.”

“Silence” is rated R, but there is zero sexual content, zero bad language, and though there is torture, it is not overly bloody or gratuitous (save one swing of a katana sword). I would have zero problems taking teens to see the movie, and I would look forward to the ensuing discussions regarding the reality of suffering for one’s faith in Christ and the rightness of characters’ choices when compared to Scripture.